A Backpack, A Bear, and Eight Crates of Vodka: A memoir, by Lev Golinkin 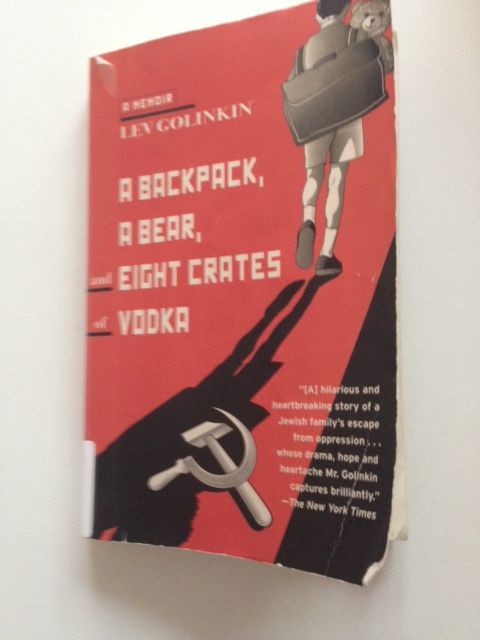 31 Jul A Backpack, A Bear, and Eight Crates of Vodka: A memoir, by Lev Golinkin 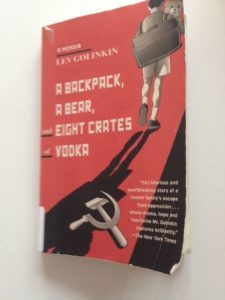 A Backpack, A Bear, and Eight Crates of Vodka, by Lev Golinkin. Anchor Books. 2014.

Lev Golinkin was nine when he emigrated from Kharkov, Ukraine (then still the Soviet Union) in 1990. His family of five had ten suitcases, two per person. The same alotment as 14 years earlier when my family of five emigrated. Their hard currency allowance was $130 per person against our $92, compliments of inflation. Like we, they knew no one and had nothing, except hope—“The best part of emigration was hope.”

This book is the story of the author’s immigration, of the era behind it, and of his transformation into an adult. It is also a story of every Russian child-immigrant old enough to remember his or her Soviet life. And Golinkin remembers. For many years he is not able to shake off the impact of brutal anti-Semitic bullying, of the hate-filled environment, and of the terror at the border-crossing he had endured.

The Fathers and the Sons

Golinkin comes into his own only after learning what it took for the sponsoring organizations to resettle the mass of helpless wide-eyed Soviet refugees and after seeking out and thanking the individuals who had helped his family along the way.  However, the most meaningful part of his growing up is to understand his parents’ perspective because, like any child, Golinkin believed that had he been in his parents’ shoes he would have done things better.

He asks them “Didn’t you plan ahead for getting a job, learning the language, banking, paying rent? … What is it you wanted from America?” (This is a question that an American would ask who doesn’t realize that banking or rent had not existed in the Soviet Union.) Golinkin finally realizes that his parents and countless others simply “wanted freedom, the freedom to live… lives without trembling,” that they left “for peace and dignity, not a paycheck.”

(My then-7-year-old does not remember the beating of a Jewish boy in her school. She witnessed it a few weeks before our emigration. But how can I forget her approval of the bullies?)

The author’s recollected and researched accounts of the 1980s and 1990s Soviet emigration are quite illuminating. The new and improved rules, “random, arbitrary, devoid of reason and logic” easily surpassed those of 1970s. (And I had thought at the time that the latter reached the peak of absurdity and humiliation and bizarreness.)

On the first day of school, Golinkin’s first-grade teacher, like all her colleagues nationwide, begins with instructions how to sit. “We sat at our desks, backs stiff, eyes on the chalkboard, arms folded, right over left, fingers straight. (In the event of a question, the right arm was to pivot ninety degrees until perpendicular to the desk, but at no point were the fingers to separate.)”

To survive, Soviet people knew to conform—how to sit, to greet, to act, to think. But conformity was no help to Soviet Jews, disconnected from their religion after the Bolshevik Revolution and persecuted for their ethnicity. Their pent-up yearning for freedom boiled over into a mass exodus when the Iron Curtain opened a crack.

Thank you, the Russian Way

Decades of tireless struggle by the American Jewry made this victory possible. “It was cause for rejoicing, the payoff from three decades of lobbying, rallying, and fund-raising.” “It worked—somehow, the leaflets scattered on American college campuses, the church petitions signed by Midwestern housewives, the letters, the protests, the vigils, the boycotts… had worked.”

Golinkin vividly and wittily describes his observations of the first months in the United States. Disposable silverware was one of them—“it was like traveling to a land where people toss out their cars after they run out of gas.”

Predictably, a culture clash follows: a people used to choices faces their brethren steeped in conformity, banned religion, fear, paranoia. The leaders of the Jewish organizations remain bitter about the Russian immigrants’ rejection of or indifference to Jewish religion, tradition, and culture. But their indifference is a factor of their past. It does not mean, Golinkin says, that the Russian immigrants do not appreciate the efforts or are not grateful to their liberators. He sees his life as “the result not just of the dark streets of Kharkov, but of the combined efforts of thousands of protestors, dozens of human rights workers, politicians, philanthropists, activists, and everyday people.”