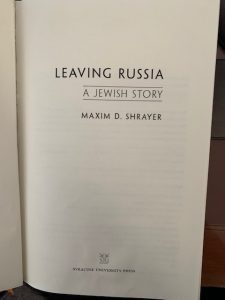 Leaving Russia is Maxim D. Shrayer’s memoir, a chronicle, a re-living of a journey. It also paints our life and most importantly our children’s life as it could have been. It makes the reader ask What If. Leaving Russia proved too personal for a detached review to post on the last day of the month like the reviews of other books.

In the hands of a less insightful writer, this book would only be an account of the persecution suffered by his family in the nine refusenik and dissident years. They were denied permission to emigrate from the Soviet Union in the 1970s when Shrayer was eleven. But, he says, “rather than attempting a historical account of the last decades of the Soviet Empire, I wanted to stick to my personal story.”

It’s hard for people who haven’t lived it to understand what Soviet life was like – the injustices, pervading hypocrisy, blatant anti-Semitism, everyday “mind-boggling absurdities of the Soviet regime” – and the mindset it shaped.

Shrayer’s twenty years in Russia were typical for a Soviet Jewish child and youth. Still a kindergartener, he received a “lesson in Jewish self-awareness” from his father: “…the next time someone calls you zhid, you tell them you’re a Jew and proud of it. Say it very calmly, and then, if it’s a guy, hit him hard on the nose. Chances are they won’t do it again.”

Our daughter did not receive a similar lesson. In first grade she reported approvingly of a classmate ambushed “for being Jewish.” Horrified, we realized that she didn’t know that so was she. Absent a derogatory remark, how would she know? She looked Slavic and had a Slavic name; at Passover, we referred to matzos as flatbread, to avoid suspicion of practicing religion. I’m still ashamed that we kept silent. A few weeks away from our exit, who wouldn’t cop out?

What if? Shrayer’s journey awaited my children. They too would live a double life. “At school I imitated a ‘normal’ Soviet teenager, while at home I lived the illicit, dangerous life of a refusenik family.” Little could be more traumatic when coming of age. Would my girls come out of the “refusenik limbo” as unscathed mensch?

“…For the past many years, when my dear friends… and I get together… we talk for hours about what if.” What-If doesn’t go away. Leaving Russia is the answer to the what-ifs that has followed us since the time our train approached Vienna on April 22, 1976. They have never become stale or grown fainter. For years, they often kept us awake at night as our minds floated through scenarios of how it may have been.

Those scenarios were vague and abstract, based on the past frozen as of April 21, 1976. When the refuseniks brought their harrowing tales to Chicago in the late 1980s, we pictured ourselves in the shoes of these heroes. What if? – remembering the trepidation of our three months waiting for permission, we, clearly, would not have been able to handle what the refuseniks had handled for so long.

Shrayer gave substance and color to the circumstances that would have been ours – had we not applied to emigrate when we did, had not my family taught us to avoid success because it would make us hostages, had not the craving for American wheat outweighed the political embarrassment over citizens fleeing paradise.

Four years ago today, my very first post appeared on my blog. It followed a dozen years of peeling back layers of my memory to uncover my family story. Leaving Russia: A Jewish Story is now part of it.