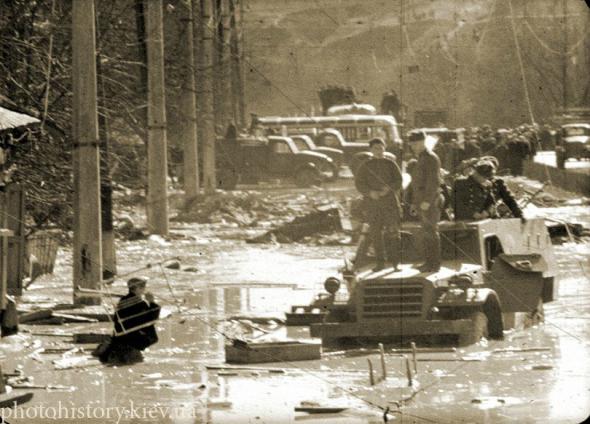 After the war, Babi Yar was used for garbage disposal. The story of the 1961 mudslide had begun a decade earlier when the Kiev government decided to fill the ravine and utilize the space for beautification purposes.

Khrushchev personally authorized the liquidation of the ravine. The project made use of the pulp dumped by the nearby brick-works. The solid part of it was supposed to settle and harden and the water to flow into the Dnieper River.

However, the insufficient capacity of the water runoff transformed the ravine into a swampy wasteland. The dam holding that mass in place was made of earth instead of concrete which allowed for leaks, particularly in the spring when the snow melted on the pulp.

Warnings were ignored. Complainers were discouraged, to put it mildly, from spreading panic. Subsequent investigation found a few engineers and managers responsible for dam’s design and maintenance; they were convicted of criminal negligence.

Too significant to pretend that it did not take place – socialist countries were immune to natural or manmade calamities – the catastrophe was briefly acknowledged in the local evening newspaper. Different sources estimate the number of casualties from 1,500 to 3,000, while the official number hovered at below 150.

Recovery operations continued for days, but no additional news or updates were published. Taking pictures of the site was forbidden. Corpses were cut in pieces by bulldozers and thrown onto the dump trucks that were disposing of the pulp.

People rescued alive were sent to faraway hospitals. If they died, they were buried in remote areas; their deaths were not included in the official statistics. No public remembrances were allowed.

Those who lost their homes received new apartments. Those who lost immediate family were given two hundred rubles, approximately two-month average salary.

For several weeks, airplanes bypassed the place of the tragedy, so that passengers would not see the true scale of the disaster. Kiev was isolated for days. Long-distance phone connections were shut down.

Following the disaster, the landslide soil was excavated and moved back to the Babi Yar ravine. New residential construction, leafy groves, and a road promptly appeared where people were killed or burned and where many remained entombed.

The landslide spared the remnants of the Jewish cemetery on the top of the hill. The authorities allowed the Jews to claim the remains but most of the descendants were dead or failed to find the proper graves. Bulldozers swept away the graves, monuments, and remains. The city could not wait, it needed a park. The bus stop was named “Recreational Park.”

Radio station Voice of America named the disaster the “Pompeii of the Twentieth Century” – the corpses dug out from the dried-up mud were in the same positions they perished.

The local populace called the disaster “the revenge of the Babi Yar.” It believed that it was payback time for their involvement in the atrocities committed during the Nazi occupation of Kiev and for the attempt to erase the memory of the victims and of the atrocities by flattening the ravine. 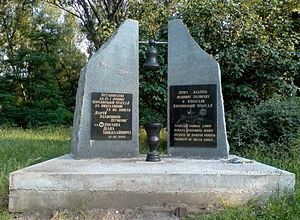 A monument to the victims was open in the Babi Yar in 2006, on the forty-fifth anniversary of the tragedy.