Joy Was Added by the Russians 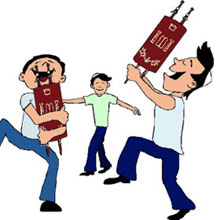 22 Oct Joy Was Added by the Russians

Today is the last day of the High Holidays – Simchat Torah, which translates as “The Joy of the Torah.” Until 44 years ago, I thought that Simchat Torah, or as my grandmother said Simchas Toira, referred to my great-uncle  Simcha whom I’d never met. The season begins about four weeks before, with Rosh Hashanah. On that day, my family had always wished me a sweet year so I knew it was the Jewish New Year. Then there was also Yom Kippur when adults fasted (I did try but couldn’t make beyond a few hours) and dinner started with apples dipped in honey.

We arrived in Chicago on September 15. Our caseworker, Susan, told us that not all of the newcomers knew the names of Jewish holidays and that we should be proud that we did. She also apologized for not pairing us with an American family to celebrate together and hoped that we would not feel lonely on New Year. We assured her we wouldn’t. And why should we feel lonely on New Year unless it was January 1?

Looking back at those days I am embarrassed by my ignorant former self. But not embarrassed enough. Recently I discovered something I should have known – Simchat Torah is the only Jewish holiday whose mode of celebration was introduced by… Soviet aka Russian Jews, of all people.

The Tribe Was Not Lost

I had no idea that on Simchat Torah, crowds of Jewish youth gathered at the few remaining synagogues to dance and sing Jewish songs for hours. Not in Kiev. My city was not one to trifle with but in Leningrad (1961 – twelve thousand people), in Moscow (1964 – fifty thousand).  This despite the fact that showing adherence to the Jewish religion, to any religion, for that matter, was risky.

In the 1970s these demonstrations became dangerous. The authorities organized beatings, sent trucks rolling down the streets, detained the young people, reported them to their schools or work. The next year they came back, both the naughty youth and the beaters. In solidarity, the Jews in the West and Israel began holding grand Simchat Torah celebrations in their towns.

The famous writer, Nobel laureate Eli Wiesel, left a description of this festival: “It was Simchat Torah evening. Anyone who has not seen the wild, spontaneous fun that engulfed everyone present at the Moscow synagogue does not know what the Jewish holiday means and how to celebrate it … I did not recognize the street. I seemed to be in Jerusalem. It seemed that the street was flying away, the heavenly angels were singing songs, King David was playing the lyre, the whole city was happy and I feel so easy as if I were floating in the air.”

So the Soviet Jews, the cut off branch of the people, created a new tradition and raised the status of a minor religious holiday that was not even mentioned in the Bible. What you don’t know can heal you – the unknown to me, defiant gatherings proved that I was not of the lost tribe.