Jewish Pirates of the Caribbean, by Edward Kritzler 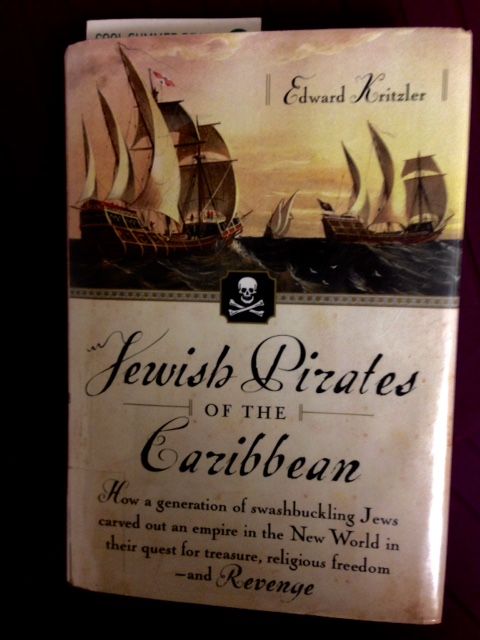 30 Nov Jewish Pirates of the Caribbean, by Edward Kritzler 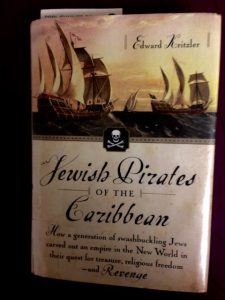 Jewish Pirates of the Caribbean, by Edward Kritzler. Doubleday. 2008.

The title Jewish Pirates of the Caribbean sounds like a punchline to a joke. Not so the subtitle: How a Generation of Swashbuckling Jews Carved Out an Empire in the New World in Their Quest for Treasure, Religious Freedom—and Revenge.

This book by Edward Kritzler tells the story of a small group of audacious Jewish merchants and adventurers who settled the New World at the height of the Inquisition. Posing as Portuguese New Christians, they established the pirate trade. That was the only group not required to prove four generations of Catholic ancestors.

Unlike other settlers who came to conquer land, convert the natives or plunder ships, the Jews came to escape the Inquisition and to create a safe haven in the faraway land. They had no home to go back to. Anywhere in the Spanish Empire, they would burn alive, or their exhumed corpses would, at any rumor of covert Judaizing. And other European countries did not let them in.

The author focuses on the era that began “with Jews outlawed in most of Europe and the New World” and “ended with their freedom.” “The Iberian expulsion, far from destroying them, assured their survival.” In the process, these adventurers, explorers, conquistadors and pirates permanently weakened the empire. Yes, there were Jewish pirates!

Of the Jewish pirates depicted in the book, the most colorful character is Rabbi Samuel Palache. He “went from commanding pirate ships to founding Holland’s Jewish community.” He was a Barbary pirate, still assailing and plundering Spanish ships in his sixties. And, duly licensed to privateer, he specialized in trade-at-sea between Holland and Morocco where he was born (50-day trip each way).

In his free time, Samuel “held the first religious services in his home” in Amsterdam. Later, he co-founded “Holland’s first synagogue, called Neveh Shalom (The Abode of Peace).” He became its first president and attached the honorific Rabbi to his name.

When the pirate rabbi died in 1616, six mounted horses pulled the hearse. Prince Maurice and the city government headed the funeral procession. “Each and every one of the 1,200 men, women, and children of the nascent Jewish community also turned out.” They honored Samuel Palache because his works benefited not only his family but his people. He was the second man interred at the Jewish cemetery purchased by his friend, a cardsharp, two years before.

To the next generation, this warrior rabbi was a hero—he commandeered Spanish ships instead of studying at home. They considered themselves “militant Jewish deliverers.” Rabbi Palache inspired them not only to continue the struggle for freedom but to bring down the Spanish Empire. With their support, the Dutch and English armies and the buccaneers of the West Indies did just that.

Turban-wearing Sinan, the much-feared “Great Jewish Pirate,” was a Barbary pirate too. Sinan migrated from Spain to Turkey where he became the infamous “Barbarossa’s crafty second-in-command” and favorite captain.

The father of Abraham Cohen and Moses Cohen Henriques, Antonio Vaez Henriques, escaped from the Inquisition to Holland. In memory of the escape, he changed family names. Vaez to Cohen, Antonio Jr to Moses, and he named his Dutch-born son Abraham. As young men, the brothers left for Brazil. Abraham became a merchant. Moses, the advisor to a Dutch Admiral, helped capture an entire Spanish fleet loaded with silver in 1628.

However, after Spain defeated the Dutch, the Brazil Jews had to leave. They settled Dutch-owned Curacao or returned to Holland. But some ventured north to New Amsterdam. That colony was founded recently on the land purchased by a Dutchman for some trinkets. No matter the place, the Cohen’s family’s determination to secure a homeland for Jews in the New World never waned. In the mid-1600s, American courts sided with them against the governor of New Amsterdam thus ensuring the basis rights of the Jewish community in what would become the United States.

Sneaking Out to Build a Homeland

Spain forbade their converted Jews (conversos) and those who chose exile over conversion to migrate to the New World. So, “a self-proclaimed Portuguese national operating in the Spanish realm was likely to be a converso…” One such Portuguese was Cabrilho, the discoverer of California. Using a common loophole in Spain’s migration policy, conversos escaped by signing on as sailors or as servants to ship passengers. Neither group required a license to leave.

The hero of the battle of New Orleans, the famous pirate Jean Lafitte left a note in his Bible. It said: “I owe all my ingenuity to the great intuition of my Jewish-Spanish grandmother, who was a witness at the time of the Inquisition.”

No one will know for sure all the explorers, pirates, or first settlers who were secret Jews. But the author reminds us of many who played important roles in developing the new continent. And in diminishing the Spanish Empire at the same time.

These include navigators and cartographers sailing with the explorers to ensure that they would not be lost at sea. Columbus’ crew consisted of many converso Jews. His translator, Luis de Torres, was one; he eventually settled in Cuba and started a tobacco farm. For over a century, Jamaica that the Columbus family ruled was  off-limits to the “hooded Inquisitors.” It was the only free place in the Spanish Empire.

A century later, in the times of the American Revolution, Jewish pirating expertise came in handy. A dozen celebrated founders of the early Jewish congregations took the side of the union as privateers. Their pirate ships “captured or destroyed over six hundred British ships and took cargoes and prizes with an estimated value of $18 million in today’s dollars.”

The size of the post does not let me share more of the amazing historical insights present in this book. So, you will have to read it.  Jewish Pirates of the Caribbean is one of those precious books that make you realize how little you know.