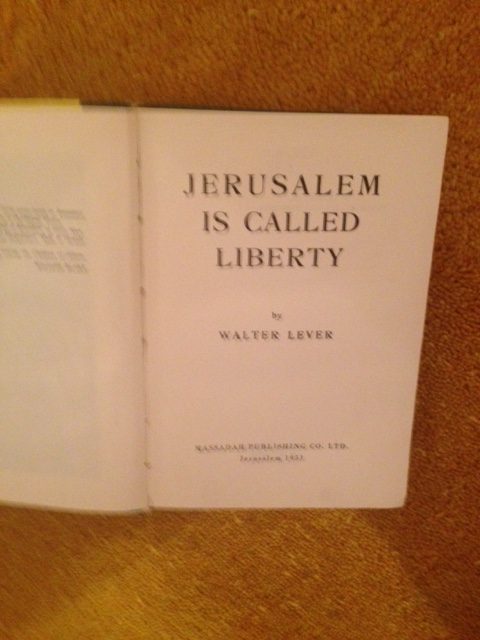 31 May Jerusalem Is Called Liberty, by Walter Lever 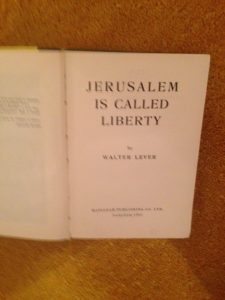 Walter Lever, a British professor of English literature, based this book on the journal he kept in Jerusalem where he headed in March of 1947 at the invitation of the Hebrew University.

The ship that carried him also had on board a special group of immigrants to then-Palestine—survivors of the Buchenwald concentration camp. “Dressed in borrowed, ill-fitting clothes, their faces coarsened, almost bestialized, by years of bondage,” they sang Hatikvah (Hope) that would later become Israel’s national anthem.

“If You Will It, This Will Be No Dream”

A Jewish state was still a two-thousand-year-old dream. But Lever found a new people in the British-controlled Palestine. The younger generation led it. The generation born free to refugees from pogrom-ridden Eastern Europe. They adopted “if you will it, this will be no dream” as a call to action.

London, Washington, the armies of Iraq, Syria, Egypt, and Jordan would not decide their destiny. They would never become “a ghetto rabble.”

The now-or-never chance to establish a Jewish nation was within reach and they committed to taking it. And they refused to envision that nation without its millennial capital of Jerusalem.

This new people faced daily attacks of their Arab neighbors and the betrayals of the British administration that was afraid to anger the populous oil-rich region. However, arms at the ready, the small Jewish enclave planted trees and harvests, brought soil on the back of donkeys to cover rocks and craft gardens, created a bureaucracy, and founded universities. 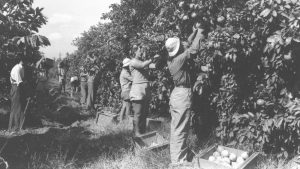 And when the Arab countries forced a war on Israel the day after it announced its independence, its small, secretly trained, poorly equipped army prevailed in that war and, against all odds, broke the siege of Jerusalem. After a two-thousand-year exile, the Jewish people had a home again and there was no going back.

The author felt that the official reports were “meat for the historians” that would assess the events after the dust settled. It was up to the ordinary witnesses like him to record their memories of living through that history, in this case, through a miracle.

The miracle manifested itself in the historical sequence of events and in the enemy’s providential blunders and hesitations that stopped them from destroying the few and inexperienced defenders of the new state. Everyone had to tell their story–“the experience of the individual becomes the authentic voice of history.”

However, Jerusalem Is Called Liberty is not a dry chronicle. It’s a thoughtful, vivid, inspiring, blow-by-blow picture of the miracle in the making: everyday life in Jerusalem and in Israel in the months before and after the country’s official birth on May 14, 1948.

Yet We Shall Come Through

Long before that momentous date, the wealthy Arabs had sold their property and left. The poor were now dependent for their sustenance on the neighboring countries that incited them to fight. Many of them fell victim to panic-mongering and fled, with the encouragement and assistance of British troops.  Some stayed and became Israeli citizens.

During the siege, not a single Jerusalem community had “broken down, or rioted, or called for surrender.”

Neither did the country forget any of the city’s diverse communities. Hospitals, old-age homes, orphanages, monks, Franciscans, Abyssinians received their supplies. And that’s despite the ration of five ounces of bread a day and eight ounces of dried beans a week.

A letter written by Lever to a friend when Israel was not yet three years old is the epilogue. It is a contented and proud letter. His nation’s history had begun anew. The beloved Jerusalem was “on the way to renewing itself.”  The number of students taking English Literature almost doubled. His country lacked resources, not enemies eager for revenge, but it was absorbing a steady stream of immigrants. The author concludes: “Yet we shall come through.”

Jerusalem Is Called Liberty is and will always remain as timely and enlightening as it was in 1951 when it was published.

If you will it This will be no dream, Israel War of Independence, Jerusalem is Called Liberty, Walter Lever