It’s All About Borscht 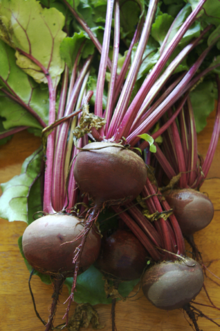 04 Nov It’s All About Borscht 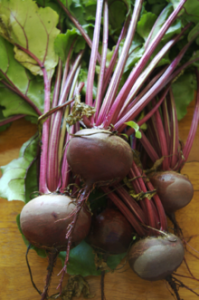 Last week my friend confessed, 37 years after the fact, that when she came over for dinner for the first time she looked forward to tasting real old-country borscht.  My gefilte fish and stuffed peppers were nothing short of mouthwatering but… oh her mother’s old-country borscht… Even the pierogi with sour cherries, also made from scratch, did not help. And I picked the cherries on a farm and pitted them with my own hands.

Surely, as I was just three years out of the same geographical space as her mother, she pinned her dreams on a logical choice.  Sadly, a chicken-soup fan, I never learned to make borscht.

In Eastern Europe, a rare family did not have borscht at dinnertime most of the days. This dish represented not merely a regional cuisine but a cultural phenomenon.

We were that rare family, my father the only exception. While my grandmother was alive, he had his fill. In the 20 years after her death he was not that fortunate. My mother and I only consented to partake in what my grandmother called Peisach (Passover) borscht. Clear, cold, red, sweetish-sourish. Garnished with, if available, sour cream and hard-boiled egg, and, in season, fresh pickles. (A pale copy of it is sold in the supermarkets.)  Years later, friends rewarded my borscht-loving husband’s suffering with a full container to take home every time we visited.

In those first years in America, we, Soviet Jews, quickly got used to the fact that our then-unfamiliar Russian accent and our awkwardness in all things American triggered questions. Where did you come from, how cold did it get in Siberia, do you like America, do you drink vodka straight, why did you leave your country.

Easy. I came from the Soviet Union (“Oh, you mean Russia!” was the typical response); had never been to Siberia; loved America; did not drink vodka, whatever straight meant; left my country because life was hard (a more involved explanation made the person’s eyes glaze over).

My vodka and Siberia answers caused doubt that I was truly Russian. Strictly speaking I wasn’t. It was wiser, though, to let the stereotypes stand because the Soviet concept of nationality was too twisted for an uninitiated mind and for our inadequate English.

In addition, Jewish acquaintances shared the stories of their ancestors who had gone through Ellis Island with just the clothes on their backs. And the childhood memories of the shtetl food their elders cooked better than anyone in the world. I could not grasp the concept of Jewish and not-Jewish food. And why would gefilte fish, buckwheat, and, incredibly, borscht live in the kosher aisle? Taste for these foods (ok, not for borscht, in my case) was universal, wasn’t it? 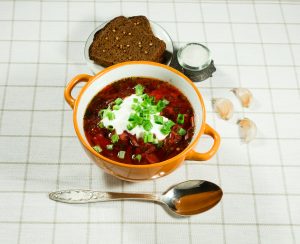 Borscht – to reproduce the Russian pronunciation, the spelling should be borshch – is one of the few words borrowed from the Russian language. It’s probably the most common in the edibles category where words like Gulag, intelligentsia, pogrom, troika, tsar do not belong.

The jury is still out on the origin of the word but borscht descended from an ancient soup cooked from various leaves and weeds, particularly hogweed. It evolved into a beet-based mixture. Not carved in stone – only the cook’s culinary imagination limits the combination and preparation of ingredients.

Borscht is considered a Ukrainian national dish. It’s served hot or cold, with or without meat, and usually with a healthy dollop of sour cream and cutup hard-boiled eggs. Supposedly, it tastes best when accompanied by a chunk of dark rye bread with garlic rubbed on the crust.

This dish cared nothing for class distinctions or political regimes. The Eastern European elite and royalty held it in high esteem, albeit the highbrow versions created by their French cooks. These aristocratic adaptations found their way to Western Europe.

My husband’s friend who had worked for Brezhnev in his native Dnepropetrovsk before Brezhnev’s rise to power, earned many tangible and intangible kudos for the pots of borscht he brought for his boss from home. Brezhnev would slurp it up right out of the pot sometimes in the middle of a meeting. The fearless leader’s wife, rumor had it, cooked it for her husband in the Kremlin kitchen.

Stalin’s granddaughter, Chrese Evans, lives in Oregon and admits to hating Russians. Her mother, Svetlana, who was his favorite child, his “little sparrow,” made sure that Chrese (born Olga) would not speak Russian. Her prejudice did not extend to borscht, though. Chrese loves borscht. She always adds an egg to it, just like her mother’s recipe says.

The Golden Age of borscht fell on the late 19th –early 20th century when this humble dish arrived in North America with the Jewish emigrants from the region of Imperial Russia that later became Ukraine. 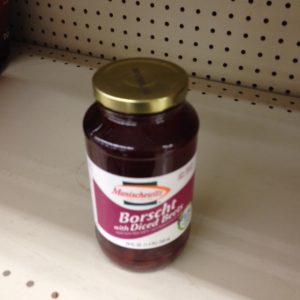 Jar of red borscht with diced beets sold in supermarkets

They deserve credit for the jars with red and green borscht on supermarket shelves and for the cabbage and beet soups on restaurant menus.

In the 1930s, Jewish-owned resorts, the only lodging available for Jewish vacationers in the United States, served unlimited borscht to their guests—hot in the winter, cold in the summer. These resorts were concentrated in the Catskill Mountains near New York City, the area dubbed the “Borscht Belt.” The borscht connection to the Jewish culture was established.

A serving of Shchi, a Russian cabbage soup, considered a version of borscht. Photo from: https://en.wikipedia.org/wiki/Shchi

As “Russian” is generic for everything Soviet, borscht is generic for any sour-tasting soup, whether based on rye, cabbage, beet, sorrel or a mix of the above. Unlike its eminent Ukrainian cousin, the Russian shchi, is made with no beets but with fresh or pickled cabbage and sorrel. Cabbage came to Russia from the Roman Empire around the 9th century.

Villagers ate shchi with wooden spoons because metal spoons burned their lips. The artisans created spoons in different shapes and decorated them with unique designs. Little did they know that their handiwork would become a popular souvenir.

Russians could eat shchi every day without getting tired of it. The addition of flour, later replaced by potatoes, made it nutritious and filling. In the 18th and 19th centuries, winter travelers loaded round drums of frozen shchi  onto their carriages to ensure a tasty homemade meal at each stop along the way. One just had to chop off a piece with an ax and warm it up. The duration of the trip did not matter – the drums came in as handy in France as in any Russian town.

In the United States, chilled shchi, called tchav or green borscht, is traditionally served during the Jewish holiday of Shavuot—perfect to greet the summer.

Hope borscht fans appreciate this post by a borscht-challenged friend.