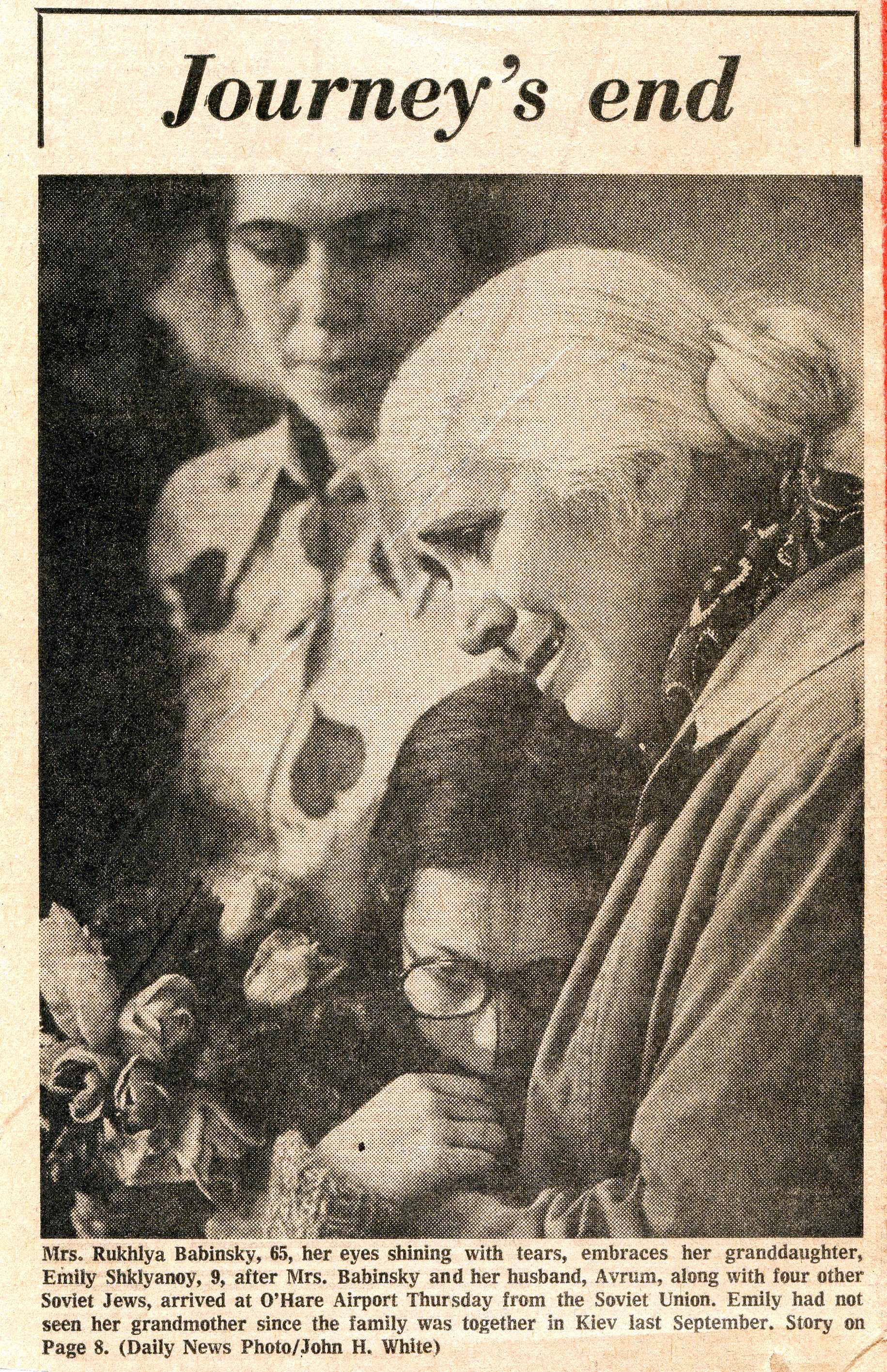 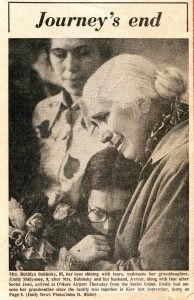 Family Together and Famous

On May 5, 1977, Avram and Rakhil landed in Chicago. Dima’s manager gave him and his car-owning Russian coworker a paid day off to meet them at the airport—welcoming new immigrants was sacred in America. We could not get over the American generosity.

Once Avram and Rakhil got off the plane, a camera-clicking and microphone-thrusting group surrounded us. From their questions we found out that Avram and Rakhil were the thousandth Soviet immigrants to Chicago. 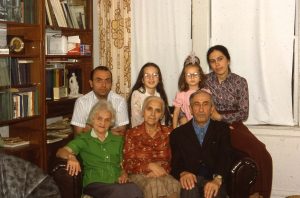 The following week a distraught reporter from the Chicago Tribune tore her hair out over the phone about losing the story to the competition and begged for an interview. She photographed us at home and in a grocery store.

Our fifteen minutes of fame did not end there. Jewish organizations interviewed us. Descendants of Ellis Island emigrants from Ukraine called to inquire about possible common roots.

Family together again, I concentrated on getting a job. If we wanted good schools, good friends, and college for our children I, too, needed a reliable income. Sporadic free-lance translation was not sufficient.

The prospects in the help-wanted ads did not mind my imperfect English, but I did mind their incorrect grammar or imprecise diction. Finally, one lady met my criteria. Vera, a name I had assumed was Russian where it meant faith, was a retired stenographer with health issues that made her eligible for a twice-a-week two-hour-a-day attendant compensated by Social Security at a rate of two dollars an hour.

On the first day, Vera opened the door dressed in a nightgown, face streaked with tears. She shuffled to the sofa and lay down. Disheveled newspapers littered the floor. “I didn’t think you’d come: The King has died today.” From the pictures in the newspapers I realized that The King was a singer.

My responsibilities consisted of cleaning Vera’s cramped studio apartment and washing the dishes ‒ child’s play for a Soviet woman. To my relief, her poodle paid no attention to me: like Rakhil, I was scared of dogs. When I had to take it for a walk I extended the leash to its full half-block length.

Vera complained of her son, neighbors, Social Security Administration, and the country disintegrating in front of her eyes. She spoke well, used a lot of idioms, and, if I did not understand, reworded them. Going home after work I skipped down the street, humming to myself. I did have skills, and Dima did not have to worry what would happen to us if he got sick.

Two months later, I replied to an advertisement for a fulltime position at five dollars an hour to clean, feed two children after school, and oversee a gardener. And the employers would arrange to drive me to and from work.

The same day, JVS offered me a job as an interpreter at three dollars an hour, five days a week, four hours a day, at the Mount Sinai Hospital clinic where we had our checkup a year before.

The mushrooming tide of immigrants most of whom did not speak English or Yiddish swamped the staff. Interpreting and translating required different skillsets but since in America one had to express confidence I accepted.

(It took several months to beat my last check for Vera out of the Social Security Administration. I recall the process fondly: the extensive correspondence gave me invaluable lessons in business writing and an insight into the workings of social services.

I communicated with each rung of the Social Security structure. As I moved up I forwarded copies of replies sent by the rungs below. When I reached Washington I needed manila envelopes to fit the enclosures.

My appeal to the top of the ladder included a chart that showed the total postage expense, the government’s and mine, and an estimate of time spent, the government’s and mine. The cost had already exceeded the thirty-nine dollars owed me. I ended with a promise to write to my Congressman and an observation that people who worked for two dollars an hour deserved to have their wages paid without engaging in a campaign.)

A Russian-English medical dictionary under my arm, I reported to the clinic manager, Lynne Sinton. She dialed the JVS and said testily: “Good morning. The interpreter has just arrived. She brought a dictionary with her. I told you to send somebody who speaks English.” She listened, rolled her eyes, and slammed the receiver: “They say you are all they’ve got.”

In the application I wrote “Jewish” for nationality; “none” on the line for religion. Lynne looked dumbfounded: “Aren’t you Jewish?” “Yes.” “So, why did you put none in religion?” “Because I’m not observant.” She crossed out my responses and replaced them with “stateless” and “Jewish,” respectively. Then suddenly she stared at me: “My goodness, you are from an entirely different world.” With these words our friendship began, one of the closest each of us ever had.

What a difference a year made! The waiting room, empty when we, diffident and ill at ease, came for our checkup, was now crowded. Immigrants occupied every chair and every spot free of plants on the windowsill. Non-Russian-speakers scurried in and out self-consciously and were gazed at as gatecrashers. Not merely the quantity had changed – half of the patients were elderly. I wanted to believe that letters, like my letters to Kiev, made it easier to convince them to emigrate with their children.

Unless a doctor required my assistance I stood at Lynne’s window helping deal with appointments and answer general questions. Patients addressed me reverently. Prefixed by “excuse me, if I may” some asked whether I actually worked there and what they should give the doctor and the nurse: a box of candy or a bottle of cognac.

They animatedly discussed my reply with their seat-mates. Having a job and communicating in English with Americans put me on a pedestal they could not imagine for themselves a few days after arrival. Compared to them, we were old-timers. Similarly, when we were in their shoes, the landsleit that preceded us even by a short time had stirred up awe.

Lynne and I were busy every second but somehow talked incessantly. By the end of the week she came to the following conclusions:

one – based on “it was illegal but that’s how we did it” that prefixed my responses to her how-did-you questions, everybody in my old country was a criminal;

two – I could not last in the Soviet Union because I was an American by nature;

three – to remedy the deplorable American ignorance, I was duty-bound to write a book about my former life.

That last suggestion became an idée fixe with Lynne: every morning at the office and every time we got together outside work she greeted me with, “What chapter are you on?”

She joined forces with Gloria when they met at my house. They promised to edit my rough translation into English; Dima vowed to take the children away on weekends. To me, the idea was a fanciful pipedream. In due course, Lynne gave up.

(Fast forward ten years: with no apparent forewarning or rational association, a neatly-wrapped plot of a novel projected on a virtual screen in front of me.

Naturally, I began in Russian only to realize, a hundred pages later, that before committing a sentence to paper I translated it to make sure it would sound right in English. That convoluted process made Russian an intermediate object that sounded, to a native ear, as artificial as a bad translation.

Not completely ready for it yet, I surrendered to writing in my second language. Lynne lived and breathed the storyline and adopted the characters as her own. My sounding board, advisor on American psyche, a blind believer in my unrivaled talent, she was, for all intents and purposes, my writing partner. She came up with the title Bridge from Nowhere – “this metaphor says it all: your old life taught you how to survive and how you did not want to live.”) 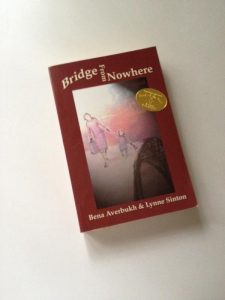 I was born in Chicago in 1976 when I was thirty-one. Eye-opening discoveries awaited me at every turn: fluoride in water reduced tooth decay; employers valued their employees; cops arrested drivers who tried to bribe them and did not stop drivers to extract gratuities.

Passersby did not admonish us for dressing our children weather-inappropriate. Women used feminine pads, not compressed cotton wool held in place with handmade “belts.” Advertisements interrupted movies and news; junk mail flooded mailboxes. Why did media allow commercials? How did companies learn our address? Did they expect a reply?

We were amazed by toilet paper in public bathrooms and, in equal measure, by it not being stolen; by gym shoes worn with business suits and evening gowns; by salespeople not shortweighting customers and by under-the-counter space open for all to see; by torn jeans and their irrelevance to the financial standing of the wearer; by the ability to relax enough to smile at strangers.

The first year of my new life was blissful and uncomplicated—every moment a surprise, a new toy, a ride in an amusement park, the reveling in victory, the intense certainty of being where I belonged and where everything unapologetically belonged to me. That irrational feeling of omnipotence never faded.