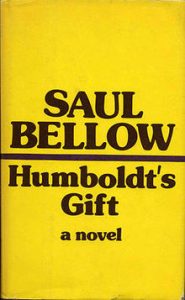 We could not wait to get a library card but when we did, the contentment associated with full book shelves did not come. Unacquainted with contemporary authors, we felt stranded, panicky that we would get trapped in second-rate literature. Dima turned to the safety of classics already familiar in Russian translation.

To my childlike “how do I find good literature” the librarian waived to a stand with a sign “Saul Bellow – Pulitzer Prize Winner.” I did not know the prize but it reassured me. I checked out Humboldt’s Gift. It took me days to plow through the first three pages. Not that I had to refer to the dictionary for every word but from one paragraph to another the content evaporated from my brain, so I had to reread them to recapture the storyline.

When my first American friend, Dima’s English teacher Gloria, saw the book she asked “Who is reading this book in this house?” Mortified, I remembered that she recently had to explain that “to cook something from scratch” did not refer to itching.

But she did not ridicule me, she hugged me: “Good for you! After this you can read anything.” A year later, she told me to enroll in post-graduate study or learn a new profession. At thirty-two? She got angry with me, “You are too old? At your age, American girls just begin to wonder if it’s time to consider marriage.”

Gloria listened with dismay to my plans to houseclean for a living. I was content, she was frustrated. First, she wanted me to try a job in an upscale beauty salon or boutique. But considering my apathy for fashion or makeup, the former did not make sense. For the latter, she scheduled an interview at a Downtown store owned by her former classmate.

A saleswoman walked away to find her boss. Strategically dispersed, tall transparent stands paraded prohibitively gorgeous clothes and accessories. Feeling like a thief, I peeked at a price tag on a scarf – one-hundred-eighty dollars. An elderly woman in a pink dress exited a fitting room. A pink bow sat on the apex of her stooped back. The woman tottered toward a floor-to-ceiling mirror while a saleswoman oozed compliments. I tiptoed outside and called Gloria from a public phone to apologize: I would not succeed at that store.

Through Gloria’s connections, I got an assortment of short translation and tutoring side jobs. To type the translations, we invested in an electric English typewriter and ordered a manual Russian typewriter advertised in Novoye Russkoye Slovo (New Russian Word), then the only Russian-language newspaper.

The Truman College in Uptown Chicago offered a typing class for adults. All the students were over forty. They said that now children learned to type in school, boys too. Twenty dollars, two months, and three hours of daily practice later I reached the speed of sixty words per minute.

In December, our luggage arrived. 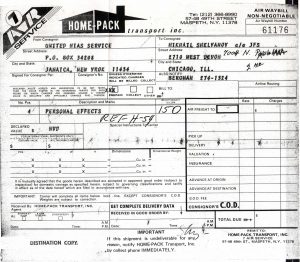 Several wall unit components were wrecked, probably due to a search for hidden gems—so much for nailing down the crates in our presence. Dima glued the broken pieces together using rented cramp irons.

1976, the second year of mass immigration from the Soviet Union to the United States was coming to an end. The new Jewish, labeled Russian, community in Chicago, numbered about five hundred people – about a hundred-fifty families; few children under school age; few adults over forty; very few seniors. We knew everybody, at least by appearance.

The more clients the Jewish organizations served the more their services shrank and the more newly-arrived engineers Susan sent to Dima for resume and interview advice. Our house served as a consulting hub. Dima felt that he outranked the newbies.

Ilya rented several apartments to Russian families. (He promised to hold one for Avram and Rakhil as soon as we told him to; they emigrated at the end of December.)

We invited our Russian neighbors for a potluck New Year’s Eve party on December 31. I made gefilte fish. (Somebody found out about a store that sold live fish from fish tanks. The salesman offered to clean the two beautiful carps I chose but that would have been arrogant of me to accept.)

Our much-envied kitchen table (nobody had one yet) was laden with a menu to die for: chopped liver, chicken kholodnoye (a gelatinous dish made from bones and feet,) gefilte fish, beef tongue, olivie salad (similar to potato salad), herring, stuffed peppers, cold cuts and cheese, fresh fruits and vegetables, napoleon cake, and cold coffee with ice cream.

There was so much food that we had to hold our plates in our laps. Though we all barely knew each other we came together to toast our good fortune and our America.

To the uninitiated, our community appeared homogenous. To the insiders, it constituted a miniature version of the old country minus the Maliche, the way a drop of water mirrored the body of water from which it originated.

That year, intelligentsia, now called professionals, took the majority from their black market brethren. The division between these social groups did not change but the dynamics did: the professionals needed no blat; they possessed useable skills and, thus, the purchasing power they could not imagine holding in their motherland.

It took a while for the “sales system workers” to acclimate to the society where the under-the-counter space was not sacred but loyal customers were. Some were bitter about the change of fortunes. A former saleswoman expressed that frustration best: “When our store “dumped” fresh fish, those engineers and doctors were all in a tizzy. And I thought, ‘Will you, nonentities, ever have enough?’ Here, their noses are up in the air, they don’t pay attention to the likes of me.”

With time, entrepreneurs learned the hard way to thank their customers if they wanted to keep them. Both groups flourished but the divide remained largely intact. And within either group, families gravitated together by their cities of origin. Believing in the superiority of one city over another blunted the culture shock.

The prevailing opinion of Americans—naïve, gullible, insufficiently educated, easy to run circles around, lacking a sense of humor—was derived from the fact that the notion of shortages did not enter their minds; habitual corruption and law-breaking appalled them; a  Russian anekdot in translation was not funny; recitation of intricacies of Soviet life met with absent stares or drooping eyelids; Pushkin’s name was not familiar or not worshipped.

So, what other conclusion than “What do these Americans understand?” Well, they did create a country we had fought to live in but that argument did not come into the equation.

To be fair, our perception of the Americans’ present was at least as nebulous as their perception of our past. True, the majority of American professionals were not familiar with Pushkin whereas the majority of Russian professionals were familiar with Mark Twain. Literature and culture aside, Americans wondered if we used refrigerators and running water and why we did not organize an anti-government movement; were miffed by the concepts of propiska, communal apartment, and onion shortages; were taken aback by our uptight, inhibited, and superior disposition and by the urge to tell our life stories in response to “how are you.”

In other words, Americans were an enigma. They exchanged greeting cards with pre-printed feelings; they wasted money on paper towels that saved the huge effort of adding a kitchen towel to the laundry and on plastic bags they refused to reuse and on breadcrumbs that a child could make from dried bread leftovers; they even used windowed envelopes to save the effort of writing out an address. They complimented the immigrants’ English profusely when they could not understand it. They called casual acquaintances friends. They contributed to charities of their own accord; they volunteered to help people they did not know.

American Jews were a double enigma. They had demonstrated, donated, fought for our freedom to maintain Jewish traditions. Signs “Save Soviet Jews” and “Never again is now” made us feel proud and important. Senator Jackson would not have been able to unlock the gates had not our American brothers prodded him. After we immigrated they thoughtfully took care of our needs, invited us to their homes for holidays, donated clothes. On the other hand, they did not see Jews in us. We were an unknown species. A disappointing species, at that.

In the spring of 1977, Susan sent me to a sisterhood event at a synagogue to share my old-country memories. The ladies rattled on about their disillusionment with us, the Russians. They put so much effort, not to mention money, to save us but we must have been well-off considering our graduate degrees. And we did not know the first thing about Jewish holidays and probably had not belonged to a temple. I asked what it meant to belong to a temple. The audience rustled with resentment until I exploded: “Had we not been afraid of attending a temple maybe we would not have required saving.”