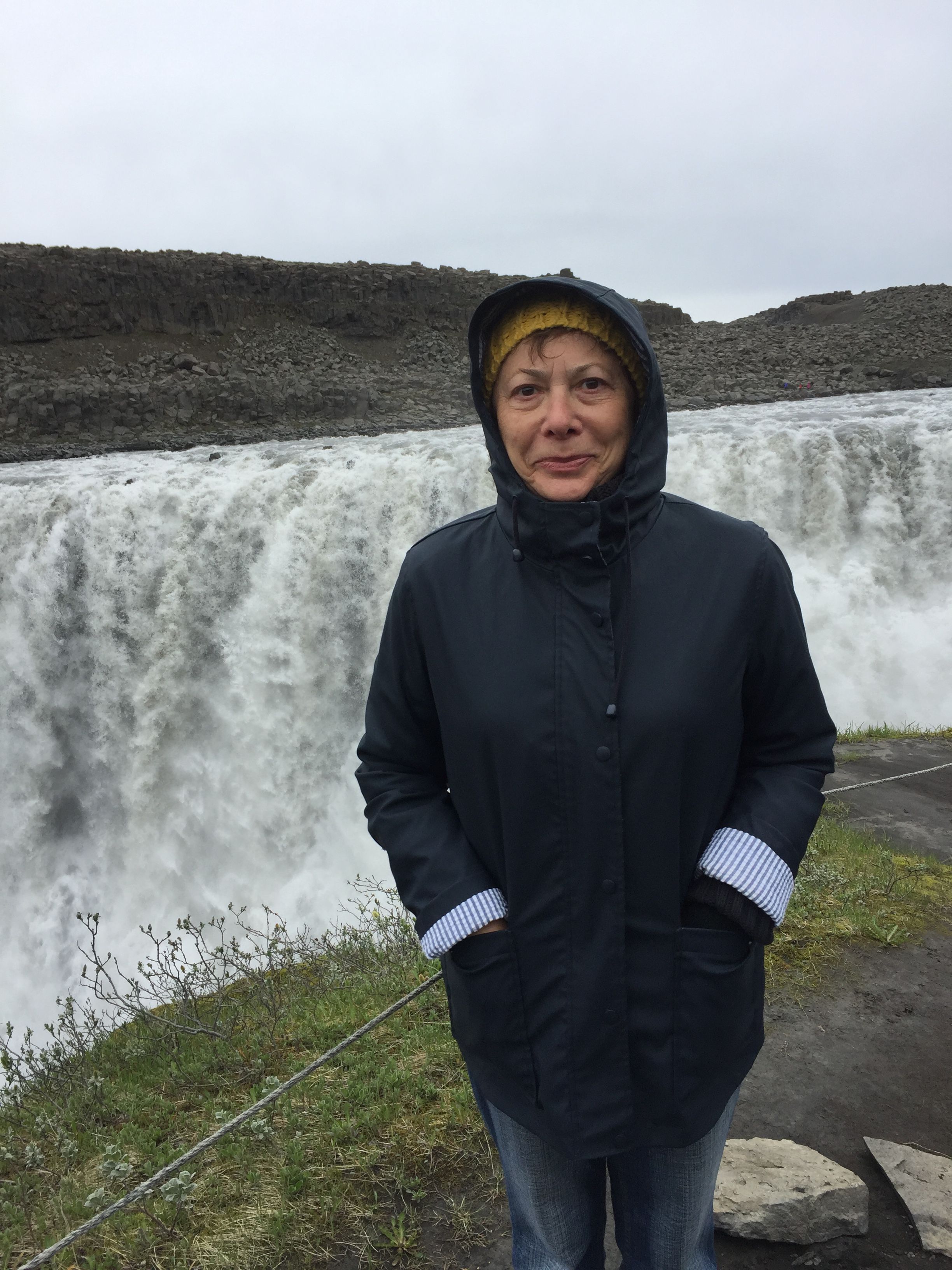 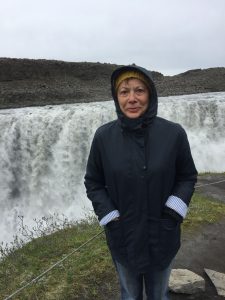 No Fireworks for Independence Day

Please know that no Icelandic names would be coming out of my mouth. Though I enjoy the way the Icelanders pronounce their “R.” It’s very similar to the Russian one.

June 17 is Iceland Independence Day. The story goes: during the WWII, Iceland, subordinated to Denmark since WWI, fought on the side of the Allies, while Denmark surrendered to Nazi Germany. In 1944, Iceland took advantage of the opt-out clause in the law to get out of the unwanted union—and did not look back.

Our tour group is here for the holiday and we ask if there will be fireworks. What? How? – The locals are incredulous — daylight in the summer is 23 hours…

Driving out of the city, we see lava fields all around. They are created by fissure eruptions which are quiet lava leaks that don’t blow up like a volcano would. The lava rocks are of different sizes and are covered with greenish-yellowish moss. Even the flowerbeds where roads intersect are designed from lava rocks, not flowers. 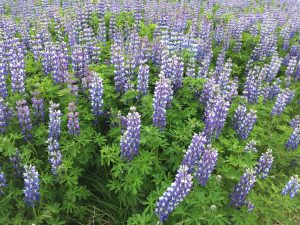 Geologically, Iceland is a young land. It lies atop the earth’s major fault lines. Faults are cracks in rocks within tectonic plates that allow rock movement. The two Icelandic plates are moving apart at a rate of about two centimeters every year. That movement is what creates a hot spot of unusually great volcanic activity. (I sincerely hope that I summarized the Wikipedia descriptions correctly.)

We see a multitude of lakes in front of us. Some puddle-like, some pretty big, some huge. 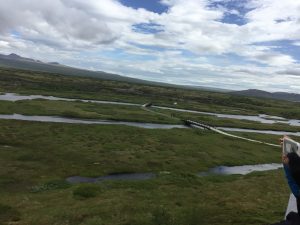 They appear randomly, fashioned by the rivulets gushing from the snow-covered mountains. The rivulets are as different as the lakes: narrow and wide, next to each other and far apart. But the lakes are not very cold, thanks to the hot springs on the bottom.

One day, the landscape is different—volcanic mountains and a desert covered with small lava rocks and tiny flowers. Suddenly a river comes into view, grass around it. No, we are told, this is not grass, even though it’s green. A multitude of red rivulets is streaming through the greenery. Explanation: The water passed through iron deposits. Rain starts and, in the matter of minutes, it stops.

Everything around us is unique and ridiculously strange. Everything. Never was I that fascinated by any country like I’m now fascinated by Iceland – the miraculous one. 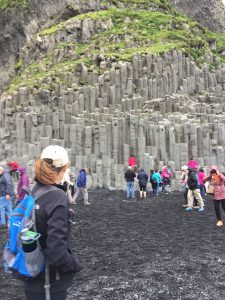 We reach the next location on our itinerary and walk surrounded by jumping patches of steam and eruptions of hot water. I run from patch to patch and smile from ear to ear. Yes, the steam smells of sulfur, but who cares? And there are colors: the colors of earth, rocks, and moss and of some bleak greenery that isn’t grass (we are told.)  And the omnipresent purple weeds that brighten the toned-down beauty of the landscape. I want to scream: Let’s leave this land alone, let’s tell others not to travel here. I’m afraid that we, the tourists, will spoil this VISION!

Some local patriots went on a hunger strike to protest against building a road through the lava. But lava is everywhere and the country needs roads to function and to bring tourists. Can’t forget that tourism is Iceland’s second industry after fishing. Anyway, rock is good, but who eats rock…

There are bicyclists everywhere on the roads. They are part of an international bicycle race. Why is it held in Iceland with its one-lane roads that don’t have shoulders? Vans carry additional bikes and other stuff. They stop often to help their teams. Male athletes stop to pee in the open field. Does it mean women can’t even pee during the race? We learn that it takes forty hours to bike across Iceland.

We arrive at the Blue Lagoon Spa. The air is 52 degrees Fahrenheit and the water 70 degrees. We are going to swim in the natural hot springs. In the warm dressing rooms we remove our gloves, hats, jackets, and the rest of the layers. No, no, no! How can I do that? It’s freezing to run out in a swimsuit. Oh, it’s so warm… so pleasantly warm inside the water. Only our heads stick out and then we get brave enough to raise our arms and buy beers from the poolside stands. Life is good!

At the Glacier Lagoon, water and ice flow constantly. (Glacier floods are catastrophic. We saw the remnants of a bridge shattered by such a flood.) Why would the blue ice swim in water and a few meters away – a myriad of birds: wings, wings in your face? A cloud of Arctic birds. Do they nest here because the river is here? We are told that after the young birds hatch, their parents become very aggressive and you will be attacked by millions of them if you dare to come close.

One morning we board a fishing boat that takes us birdwatching and, a special treat, to eat scallops right from the sea. 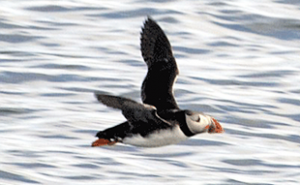 The Iceland puffin. Photo from: https://www.icelandontheweb.com/articles-on-iceland/nature/wildlife/puffins

Red-beaked little birds dive in the water; the driver says that these are puffins considered, for some unknown to the locals reason, the symbol of Iceland. The birds, their nests, and their poop cover the cliffs nearest to the boat.

A net thrown into the water to reel in our meal comes back full of sea creatures. 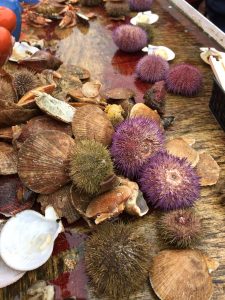 The crew opens it over a long table, and bright-colored sea urchins spill out, crabs, and shells with the promised treat, the scallops. My cell phone ran out of charge (bummer!)

The bus passes by farms, their fields dotted by bales of hay packed in all colors of plastic that resemble gigantic marshmallows. Most farms grow livestock. When we stop, a baby goat walks toward our bus; 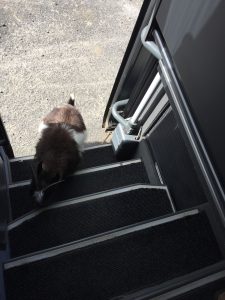 with the door open, it starts slowly climbing up until a local man pulls him down by his back feet, under the generous laughter of the whole bus.

Sheep run everywhere. Most are moms with two babies by their side and most are white, but there are black ones, too. Some of their children seem of mixed race. They are white with black legs or ears or dark with white. I asked how the farmers control their animals’ population. They slaughter most males for food.

Icelandic horses are something to brag about. I know nothing about horses, but I notice at once that the breed is unique. 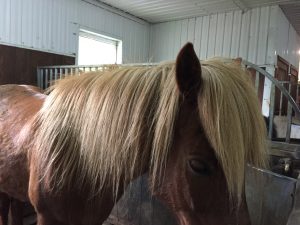 With their magnificent manes and tails and their strong long legs, they look as though they belong in a long-ago century, maybe in the time of Vikings (I wouldn’t be surprised.) People from other countries pay small fortunes for these powerful beautiful animals.

What You Always Wanted to Know About Iceland

In one town we discovered a knitting museum. Aha, that’s why the town’s electric poles are covered with gorgeous crocheted pieces! 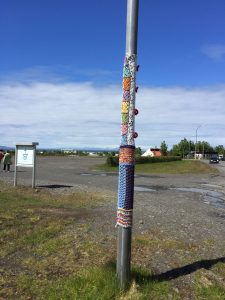 In another town we tour a Herring Era museum and then taste several kinds of herring, rye bread, and schnapps.

Before 1989, when the sale and consumption of beer was forbidden, farmers were known for adding Pilsner to the moonshine they produced. They visited each other, driving their tractors to sample the neighbors’ moonshine.

Salaries in Iceland are high, and so are taxes. Everything is expensive: groceries, clothes, gas. The first Costco opened recently and the shelves were emptied on the first day.

Most of the heating and the electric power is generated by the renewable geothermal energy, available thanks to the concentration of volcanoes. In the winter, even pavements in the Iceland’s two big cities are heated. Steam is a valuable commodity: when steam started coming out from under one farmer’s field he began using the hot water for his needs and also selling it to his neighbors and making a ton of money.

The conversation with our tour guide turns to politics. She assures us that her country of 350,000 is able to accept more Syrian migrants. They’d work and pay taxes into the country’s pocket. Someone asks if housing is available for the newcomers. No, there is a shortage of housing. Some Icelandic young couples prefer to move to other countries instead of waiting for better living conditions.

The Best for Last

I simply cannot finish without telling you about the Iceland’s waterfalls! Since I don’t remember their names, I’ll just combine a few in one huge unreal memory.

A two-tiered waterfall sprayed us when we came too close—that was fun! A waterfall that looked like lace because of tiny streams flowing through lava. A blue waterfall that was a source of a blue river. 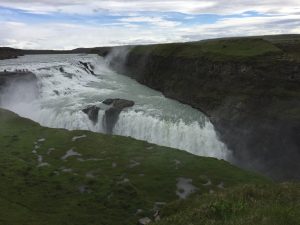 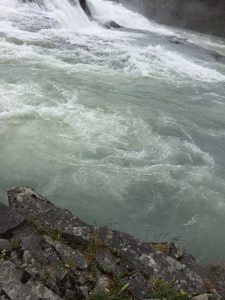 A waterfall that is 100 meters wide, so powerful that it makes rocks vibrate around it.

You travel through this tiny country from one extreme to the next, not able to take a breath between the views.

Everything overwhelms. The beauty of the surroundings is unparalleled.