I Brought Down an Empire 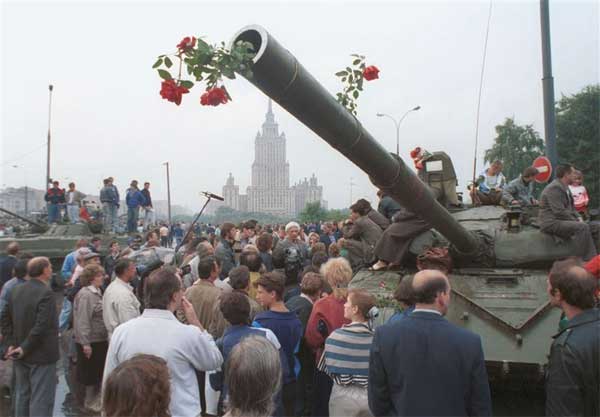 16 Dec I Brought Down an Empire 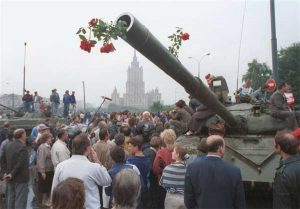 The peaceful end to the Moscow putsch, August 1991, a precursor to the collapse of the Soviet Union. Photo from: http://thepeoplescube.com/current-truth/boris-yeltsin-s-lessons-for-america-in-two-parts-t1215.html

Credit where Credit is Due

The Soviet Union fell 25 years ago and we, the 1970s emigrants, deserve some credit for its collapse. Of course, much of the credit goes to Voice of America and others that had shaken loose the first stones in the foundation. From them we learned about demonstrations in support of Soviet emigration and about life with no fear or shortages. The reports must have been true because they were usually jammed.

Our letters from outside the Iron Curtain became a step-by-step manual on emigration from the Soviet Union and on what to expect in the new confusing world. The recipients scrutinized every detail then shared them with trusted company. They felt privy, they said, to top secret information. The parcels stuffed with goodies from Goldblatt’s basement, too beautiful to wear, were the icing on the cake.

From December to December

In the late 1980s, the Gorbachev’s government found it “most terrifying” that “we stole from ourselves, took and gave bribes, lied in the reports, in newspapers, from high podiums, wallowed in our lies, hung medals on one another. And all of this — from top to bottom and from bottom to top.”

So, what else was new? The Soviet Union still seemed an unshakeable monolith.  No one could predict the sign on the country’s virtual headstone to read: December 30, 1922 – December 26, 1991.

December 26 began on August 19. That day, when our daughter came home from work she found her parents, still in their business clothes, staring at the TV screen – living statues. 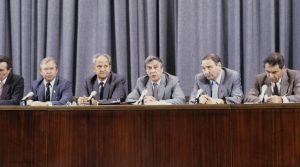 The screen showed a row of washed-out men, hands shaking, possibly inebriated. “Most wanted?” she inquired, skeptical that a group of middle-aged men in suits populated the list of the worst offenders.

They were the leaders of a hardline putsch against Gorbachev’s reforms. The live news from Moscow showed a country I left 15 years earlier and now did not recognize. 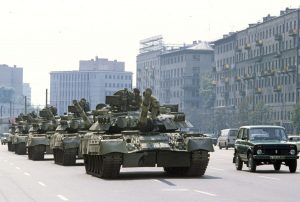 The putsch-boys arrested no one. They—imagine!—wanted to avoid bloodshed. Three—only 3!—were killed, in an accident I must add. People, unmolested, milled around tanks and placed flowers into the guns. Soldiers and civilians spoke amiably.

Vis a vis my letters, photos, and parcels, tanks and fear had nothing to show for it. I brought down an empire!