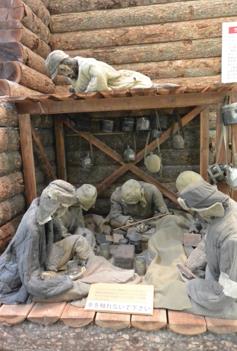 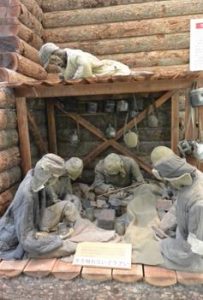 Japanese internees of the Gulag. Photo (Inside the camp: Distribution of Food
Exhibition at Maizuru Repatriation Museum). Photo in: https://japaneseinsiberia.ucdavis.edu/en/recollections

Are You From Siberia?

The hotel in Providence, RI, where I attended the staged reading based on my story (in case you haven’t heard of the event yet) offered breakfast. One morning a middle-aged Asian woman at the next table caught my attention. Her eyes lowered, she ate her three cups of yogurt in small, slow, rhythmic mouthfuls.

“It was Russian you spoke,” the woman stated after I finished a phone conversation. Though she did not raise her voice much above whisper her words came over clearly, in spite of the din of the cafeteria. “Are you from Siberia?” she asked. I was used to this question because in many minds, Siberia stands for Russia like Russia stands for the Soviet Union. And in some not geographical sense Siberia and Russia truly are synonymous.

“My mother was Japanese. She knew some Russian but I only remember the word drová (firewood),” the woman said. Her rolling Russian ‘r’ sounded authentic. “She spent two years in the Gulag after the war.” My eager expression met with a detached smile. I did not see her again.

Japanese in the Gulag? Why not? If the WWII POWs from Europe became acquainted with the infamous Soviet camp system, why should the Japanese have evaded it?

Soon after WWII, the Soviet Union transported a half million of Japanese prisoners to Siberia. By some accounts, close to a million, among them women. Many starved to death. The internment lasted from two to four years or longer.

History is a Family Story

My hat is off to Professor Haruko Oshima Sakakibara from the University of California Davis who created https://japaneseinsiberia.ucdavis.edu/in memory of her uncle who spent six years in the Gulag. Another family story that illuminates a little-known page of history.

Especially do not miss these pages:

What would the world do without family stories?