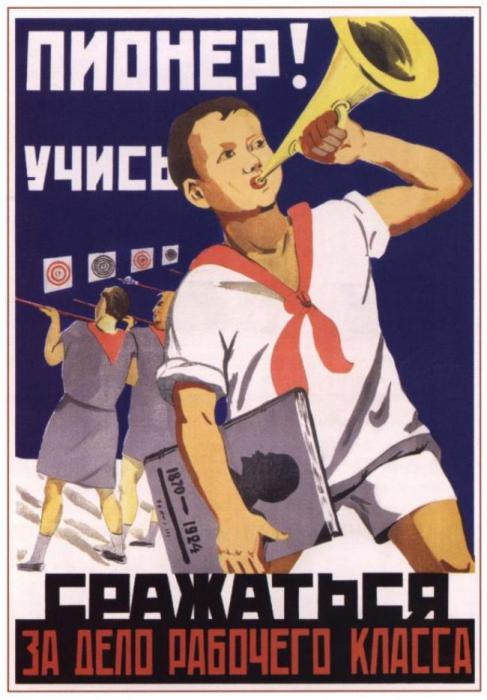 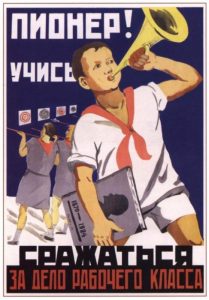 Soviet Poster of 1930: “Pioneer, Learn To Fight For the Working Class” by Lebedev and N. Krasilnikov. Years on the boy’s book are of Lenin’s life. (Photo from http://vakin.livejournal.com/898179.html and http://cheger.livejournal.com/165056.html).

As a break from her chores, Polina watched me do my homework; attempted, and failed, to improve my sprawling handwriting; directed my home rehearsals of school recitals; and listened to me. Listened as intently when I was a child as when I was a mother.

She commiserated with me, when I was six, at my travails of gaining acceptance into a game played by two slightly older and considerably tougher girls. She celebrated my victory with a batch of sugar cookies while hiding her concern that my role in the game was of a man who drank vodka and beat his wife. Then she surprised me at my birthday with a child-size apron, kerchief and lapti: 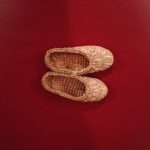 When Polina taught me the crisscross stitch, we made gifts for my parents together. To start me off, she would prepare a canvas with squares of five-by-five threads by pulling out every sixth thread in a piece of coarse linen. 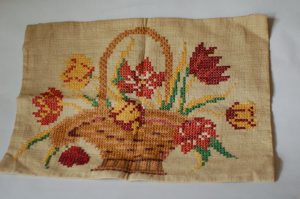 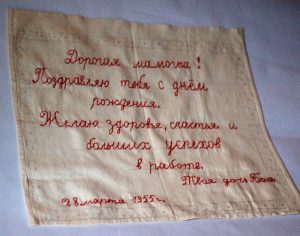 I would pencil a message on the canvas that guided my X’s made with a silky thread. After mastering the simple stitch I graduated to Bulgarian crisscross that looked like an asterisk. We secreted the work-in-process inside the headrest of her sofa.

Our last, and the most sophisticated, team project when I was twelve was to craft a jewelry box from a combination of flowery postcards and shiny satin. Polina outfitted it with a handle, a red tassel of disheveled silky threads hooked to the edge of the lid. 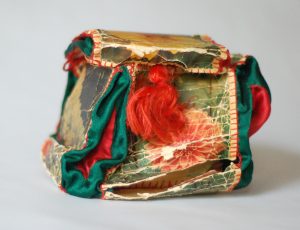 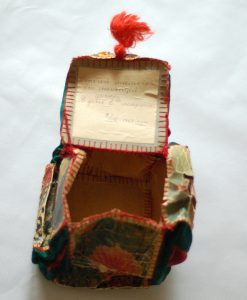 I presented the box to Rakhil, who never wore jewelry, for the International Women’s Day on March 8. It carried my handwritten message on the inside of the lid.

Stricken by muteness whenever a word of praise or a diminutive Benochka was in order, she accepted my presents silently. “Sag shon epis (say something already),” Polina nudged her. (Rakhil was not capable of praising but she brought that box to the United States.)

Polina governed with few rules. Breakfast – a big affair of yesterday dinner leftovers and bread with butter – was the law of the land. As was no-snack-between-meals. Soup was the gate to any dinner.

Another serious matter concerned singing in the morning: “you have not accomplished anything yet, let’s hope you have reason to sing in the evening.”

Other rules came out as advice:

“Better not to wear tight clothes, let the boys guess, it’s their job.”

“Before you talk put yourself in the other person’s mind – and you won’t talk.”

“Try not to feel guilty if you have not done anything wrong; life passes by while you explain yourself.”

“In fateful moments, you’re responsible for your children, not your parents – the children are the future.”

“When you give your children the last crust of bread, let them believe that you are not hungry. Mentioning sacrifice will make them feel guilty.”

I-told-you-so did not exist in Polina’s tool box: “If you understood your mistake, why rub it in? If you didn’t, what’s the use in fighting?” Her aversion to quarreling stemmed from aversion to patching up: “Makh das mit ein shloyf (leave a knot instead of burning bridges.)” But she did not shy away from a rare irreversible breakup: when a beloved relative offended her she quietly asked “zu mein leviyah zol sie nicht kimmen (she should not come to my funeral.)”

Like her father, Polina did not value obedience achieved through finger-wagging or punishment. She prodded “Tracht, mein kind (think, my child.)” In due course, I realized that she had wanted me to answer “then what?” to myself before I acted.

Housekeeping and the task to make something from nothing may have monopolized Polina’s time and strained her creativity, but nothing could sidetrack her from the mission to block the Soviet mindset from crossing my mental threshold.

I was warned to stay away from Maliche and its Party and from the lure of titles, degrees, and other goodies. Had Polina been familiar with the Classics, she would have said “Fear the Maliche bearing gifts.” Since she was not, she said “Gehen sie in drerd mit zejere mitsiyis (let the earth swallow them and their bargains.)” I was especially warned against the Maliche’s mind-enslaving verbiage that molded the breed of Homo Sovieticus (had she known Latin she would have authored the term.)

Man darf fershtehen und man darf shveigen (one must understand and one must keep mum) – this phrase was soldered into my childhood and youth. Obviously, family safety depended on keeping mum, but what was I supposed to understand? Polina did not volunteer details for fear I would share them with strangers. Her quiver held no arrows besides her faith in logic, spoken or unspoken. While I was little, it sufficed.

Looking back, countless subliminal messages must have flown by unnoticed until some hit the mark leaving an indelible impression and fast forwarding my mental age by years. Soviet nine-year-olds took seriously the right (rather the obligation) to join the Pioneer organization and, thus, become Lenin’s grandchildren. I was trusted to open the festivities with the recital of the sacred communist anthem, the Internationale.

Polina tensed when she heard the words of the anthem: “We’ll demolish the world of oppression completely then we’ll build our own new world in its place. Who was a nothing will become an everything.” She could not believe her ears, “Vus heist man volgert (what do you mean demolish)? One must first salvage what’s usable. Or how will you know how to build? And remember that ven a dienst wert a balabuste ken kein tukhles nicht sein (when a servant becomes an overseer, no good will come of it).” She concluded with “Let’s suppose all this happens – und vus veiter? Trakht, mein kind (and then what? Think, my child)” followed by the mouth-locking sign.

When I arrived home, flushed with pride, in my red neck scarf and wearing the Pioneer pin 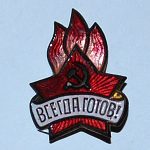 Pin, the way it looked in the beginning of the 1950s, worn by each Pioneer, a member of the Communist Youth organization for children aged 9 to 14. The words say “Always ready!” (Photo from https://ru.wikipedia.org/wiki/пионерский_значок)

on the wing of my pinafore and announced, “Now I’m a true Lenin’s granddaughter!” Polina looked disoriented. “Why Lenin’s? A danken Gott (thank God,) you had two wonderful grandfathers.” I remember my helplessness at not finding a retort and my surprising indifference when Polina called the red neck scarf die rejte shmata (the red rag.) 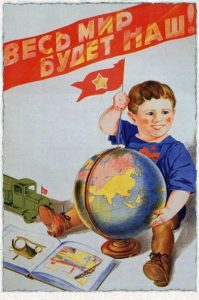 My classmates loved Polina, in spite of her stilted Russian. They envied me a bábushka that talked to them “like a young person would.” She disapproved of my attempts to disregard the first-glance feeling. “Man darf zuhiren sich zu dem ershten kling (one must listen for the first chime.)”

It was frustrating to acknowledge that an ancient person like bábushka understood more than I. “Wrinkles don’t tell age, they show tired skin. Inside I am the same as at eighteen.” I could not wrap my mind around that notion until she put it in perspective, “If people know nothing when they get old, then you will know nothing when you are old.” (I used this logic on my teenage children – it worked.)

Polina seemed satisfied with her progress in keeping my mind intact until, at fifteen, smitten with the promise of the Khrushchev’s Thaw, I declared it a Soviet Renaissance. Not that she knew what Renaissance was but my shining eyes as I copied poems from books borrowed for the night into my notebook alerted her to potential danger.

She was instrumental in packing me off to Leningrad to spend my winter break with her brother Leib. She knew to count on a seamless relay from one Velvel’s child to another.

I learned much later that bábushka had briefed Leib before my trip then received assurances after the trip that, in his estimation, my mind had the capacity to appreciate logic. It took me four decades to realize how focused she was and how astute. And how courageous her endeavor was in the environment at hand.