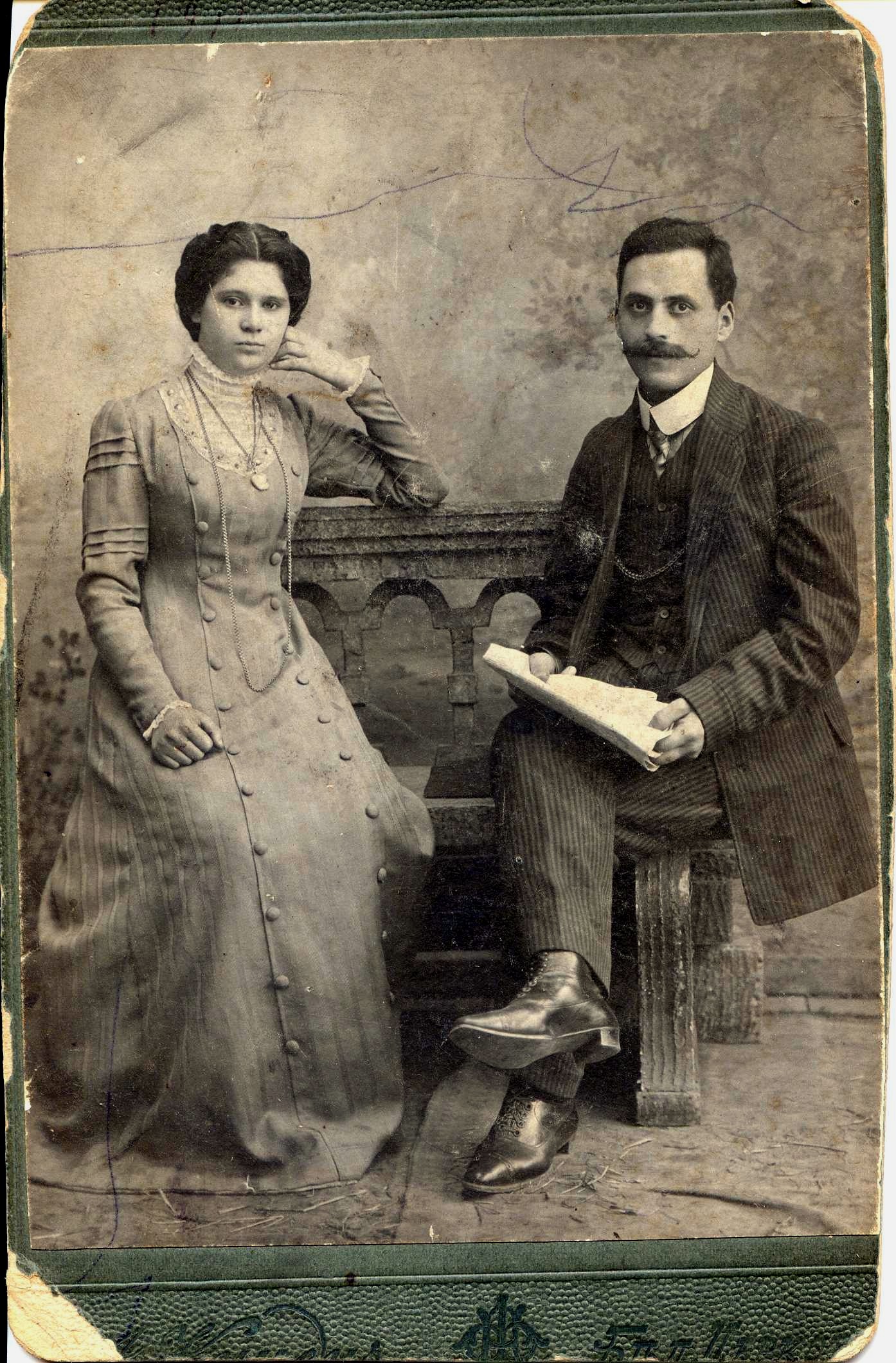 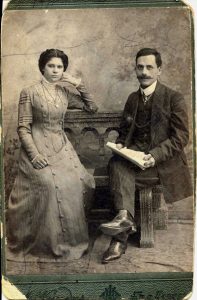 Bena stayed in Belaya Tserkov from then on. He kept books for several businesses and lived at his sister’s house and attended every Sabbath meal at Velvel’s house. But, he did seek Polina’s unchaperoned company. Her little siblings served sentry duty to the couple’s encounters, brief but sufficient to slip in a kiss.

By wedding time, Bena saved up enough to put an advance on a two-room house; his parents presented the newlyweds with the best quality featherbed, linen, and a set of modern furniture: a three-leaved mirror, wardrobe with fancy door knobs, et al. The bride wore Khanah’s practically new shoes. Khanah, escorted by Khaim wearing a top hat, showed up at the nuptials with a swanky plush bedcover.

Polina had much to brag about to her older brother Avrimele who had emigrated to America:

her marriage was not arranged but for love; she married into a learned and well-to-do family; she did not let her husband take a passé rabbi position thus accepting a passé role of rabbetzin; she made her wedding dress from new, never used, material; she distinguished herself in Belaya Tserkov as avant-garde in two categories: as the first Jewish bride to do away with a traditional white gown in favor of a regular dress and as the first Jewish wife not to cover her hair with a tichel but to simply coil her braid around her head.

Polina sent Avrimele her wedding picture that his daughter gave me seventy years later. A note on the back said “Aunt Pearl.”

Bena ended up a bookkeeper and, in a concession from Polina, a kazyonny ravvin. She now counted herself a middle class matron — for the first time, she owned kid gloves, in addition to cloth ones, on her small, famously well-shaped hands. 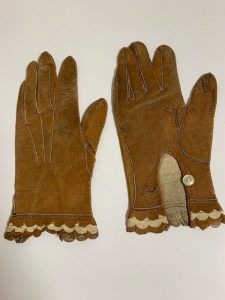 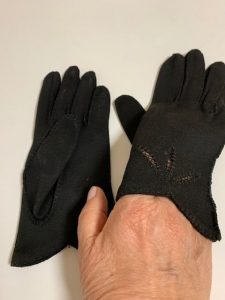 Tsipora’s cloth gloves dated around 1910s for everyday use

They named their first child, my mother, Rukhlya (Rakhil), after her Averbukh great-grandmother Rokhel. The pogroms of 1919 blew Bena’s parents out of Korsun and into Kharkov, then-capital of Ukraine, where his siblings had moved earlier. He did not follow—Polina refused to leave her parents behind and, after a seven-year wait, she was finally pregnant again.

Not receiving letters due to the chaotic mail service, Bena headed there to check on his pregnant sister Babele. He planned on returning home in time for the birth of his baby. The grubby cattle trains that transported people transported germs. Bena was already sick with typhus when he arrived; in a short time he was gone. He was thirty-five.

He was buried in a common grave. Babele cared for him around the clock. She did not contract the disease and neither did her baby, who was born days after Bena’s death. (Leib, Bena’s father, predicted that he would not live to his favorite son’s first yahrzeit — he passed away eleven months later.)

Polina gave birth to a boy before the news of her widowhood had reached her. Had she known she would have named the baby Bena. She named the baby Shmul after her brother Kutsya. The baby, she liked to point out proudly, looked like her handsome father-in-law. Shmul lived one month. Polina, burning with fever and delirious, was not aware of her son’s or Bena’s passing. She was not expected to survive the typhus.

Her brother’s Kutsya’s widow had buried the infant and nursed Polina back to life. As soon as she could function again, Polina moved in with her parents. Her former house was soon looted.

(Adored by her husband’s family, Polina developed an especially deep attachment with his youngest sister Babele and brother Grisha. Babele’s care of Bena in his last days, the fact that she had closed his eyes and that Grisha had carried his body down the stairs to the horse-drawn pallet that collected corpses for burial, made her and her siblings-in-law bond as profound as the one they had with Bena.)

Following the cataclysms of the era, the Jewish singles scene boasted a generous supply of recent widows and widowers of various ages and circumstances; those with surviving children were especially eager to find a step-parent for them.

Quite a catch at twenty-eight with one child plus the bonus of yikhes, beauty and housekeeping talents, Polina had her pick among the many proposals that came her way. She had one answer for each contender, “There can be no one like Bena and I don’t want anybody different.” Her attitude had also something to do with her belief that step-families did not make for healthy relationships. “Meine kinder, deine kinder, unsere kinder (my children, your children, our children,)” she shuddered.

(Marriage proposals from many a former landsman continued until Polina was in her sixties. One man (incidentally also called Bena), a dear family friend, tried three times: in 1909 when he did not know of her unofficial commitment to Bena; in 1920 after he lost his wife to typhus; in the 1950s after he lost his second wife.

On that last occasion, I was surprised by bábushka’s lighthearted laughter. “He must be meshugge to hope that I would leave my granddaughter to wash a man’s underpants.”

Named after my grandfather, I often heard from her that when I was born Gott had rewarded her more than she had dared to ask for by letting her utter the name Bena thousands of times. It did not matter that Bena was a men’s name because it was the only name for her grandchild.)

Limited as Polina’s employment opportunities were, her social class of meschane, not the esteemed laborer or peasant, created an additional obstacle. She was lucky to get a job at a textile factory delivering heavy sacks with yarn to the weavers. She worked two shifts every day.

This job supported her, Rakhil, and Sheina-Gitel for ten years. It also gave her a prolapsed bladder that plagued her for the rest of her life and contributed to the fatal kidney failure. Of course, she could have earned a better living by seamstressing but the Hasidic teachings considered menial service to others so demeaning that the idea was as inconceivable as becoming a prostitute.

(I was five when a neighbor found out that my extravagant coat (assembled from pieces of my father’s greatcoat) was made by my bábushka and asked her to make one for her granddaughter. Polina, speechless with humiliation, took my hand and marched home; tears were sliding down her cheeks. A suggestion to provide menial service was a deep-felt bizoyen for a dayan’s daughter).