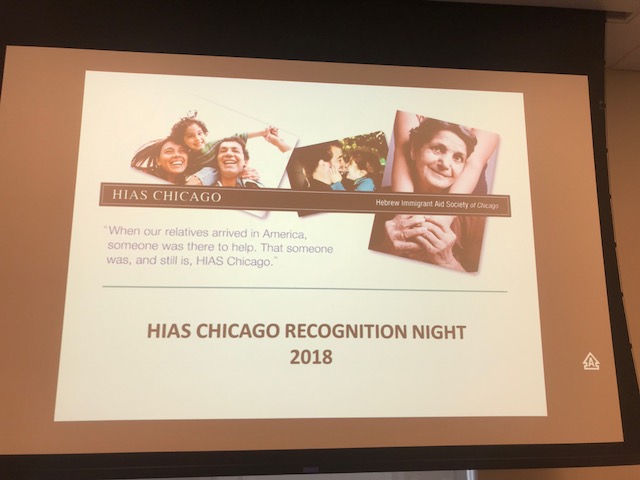 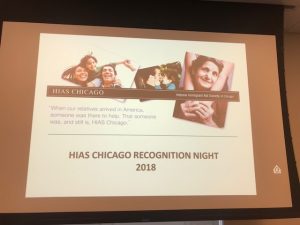 No Old Age For Good Deeds

As it nears the 140-year mark, HIAS does not grow old to anyone who had the privilege to receive or provide assistance to newcomers because good deeds don’t grow old.

This occurred to me at the HIAS Chicago Recognition Night 2018 two days ago. The organization was awarding scholarships to a dozen young people. They were children of Russian immigrants and themselves budding philanthropists. They were all either born in the United States or arrived at a young age. Each of them told a family story, a story familiar and unique.

It also struck me that one feather in HIAS’s hat has remained unrecognized—a hat unique to us, the Russians. Quite a feather it is: HIAS introduced the concept of charity to the Soviet mindset.

Soon after the Six-Day War of 1967, the word HIAS entered the vocabulary of potential emigrants compliments of the Voice of America and forbidden literature. First, the rumor persisted that HIAS was the name of a person, possibly derived from Chaim. Then we deduced that the name belonged to a group of American Jews. A group that banded together to assist the Soviet Jews once they were on the other side. They called their movement Save Soviet Jewry.

No questions asked, we put our trust into the mindboggling idea of helping people you didn’t know. The answer to “what are we going to do after crossing the border” was a firm “HIAS will be there.” And it was—two dark-suited men stood at the door of our train car in Vienna on April 22, 1976.

We didn’t realize right away that HIAS was an abbreviation; it took years to get used to the notion of charity and much longer to the realization that HIAS now depended on us as part of American Jewry.

Well, in all honesty, we felt somewhat deflated to eventually discover that the organization had not come into existence exclusively for our sake and that it was not even the only charity in the United States. You mean, we were not the most important immigrants in the world? Disappointing.

HIAS’s example rubbed off on my family as soon as our friends and friends of friends began arriving in the late 1970’s. We had a car already, a huge green Ford Galaxy 500 that seemed to have been designed with Soviet immigrants in mind. Oh, the thrill of meeting them at O’Hare—just like HIAS had met us!

The excited, anxious, bewildered families packed in the back seat asked for our advice deferentially. We were so American, so confident, so all-knowing. That car went on multi-family grocery-buying trips, to garage sales, it moved mattresses on its top and chairs and cabinets in the trunk. A decade later, more people came and we had two cars.

But back to the event two days ago. The Director of HIAS Chicago, Jessica Schaffer, found the right words to express what the stories of the scholarship recipients made everyone feel—warm inside.

We belong to an extraordinary community welcomed by HIAS and tended by the Jewish Family and Children Services. Considering where it started over four decades ago, its contribution to its new home is extraordinary.

I was proud to see the announcement of the upcoming theatrical event The Apple Does Not Fall: Journeys of a Russian-Jewish Family — my two plays and my granddaughter’s short documentary film* — on the registration desk. 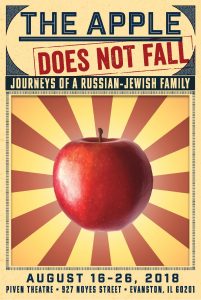 It tells about the old country and the defining moment in our lives and, by extension, the lives of our children and grandchildren—immigration. Our goal is to keep memories alive and to make you feel warm inside.

To learn more and to buy tickets: https://www.firsthandtheatrical.org/.

We are humbled by and grateful for the support and trust of HIAS,

and our media sponsor Vashe Radio