Five Quarters of the Orange, by Johanne Harris 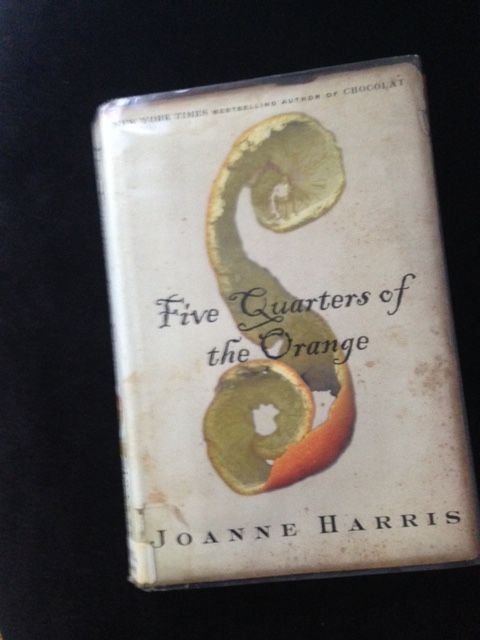 31 Aug Five Quarters of the Orange, by Johanne Harris 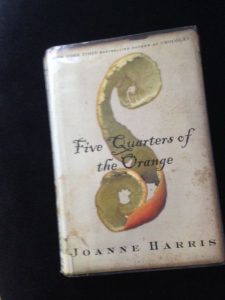 Five Quarters Of the Orange, by Johanne Harris. Morrow. 2001.

The Occupied And the Occupiers

The time is Nazi occupation of France, the Resistance, the French collaborators. But that is only the canvas of Five Quarters of the Orange on which the story is told. Harris explores childhood and family, the struggle, compromise and surrender, the love revealed through cooking, the damage inflicted by family secrets, and the power of memory.

The family is Mirabelle Dartigen and her three children. Mirabelle who lost her husband in the war lives in a small French village Les Laveuses on her small fruit farm. Fortunately, the village has “no barracks, no school, no public buildings” for the Germans to stay in. Though spared the constant presence of the occupiers, the village faces them as they commandeer some produce from the local animal farm and whenever they arrest a subversive or search a black marketer’s house.

Yes, even the children hear of the roundups of Jews in Paris and of the Nazi death camps, but that awareness is vague and movie-like and remote from Les Laveuses where “things were different.”

A harsh, obstinate woman, Mirabelle is not well-liked and prefers to keep to herself. She also suffers from long-lasting incapacitating migraines brought on by the smell of oranges. With her children, Mirabelle is brusque and unreasonably demanding. Finding no visible sign of love, they do not realize how much she cares. It seems that she is only able to show affection for her garden and for cooking.

“The fools we were when we were children”

Left to their own devices, the children look for distraction from their bleak life and from the complicated world. Framboise, the youngest, is the most rebellious, independent and scheming. And the most insensitive toward her mother, just as, she thinks, her mother is toward her. “I found myself looking for ways to get to her again… I make no apologies. I wanted to hurt her. The old cliché stands true: children are cruel… We were merciless when we scented weakness. …. I had seen weakness in her, and from that moment I was unrelenting.”

The children befriended by a charismatic manipulative German soldier Tomas begin collaborating with the Nazi. They trade information about their neighbors in exchange for chocolate, lipstick, cigarettes, and comic books. The Nazi arrest their teacher for having a radio—“we told them—well, we just mentioned to one of them.” Tomas sells the things he confiscates on the black market then blackmails his victims.

However, Framboise’s brother reasons that “It’s not as if anyone gets hurt. It isn’t even stealing… That black market stuff belongs to everyone. I’m just making sure that we all get our fair share of it. … Like Robin Hood. …Put that way, it did seem perfectly fair and reasonable.”

The Stakes of Memory Game

“Try to see what that meant to us,” Framboise says as she looks back, “We were children. … In a sense this was still very similar to the games we had played in previous years. … The game had broadened a little, that was all. The stakes were higher.”

Yet their collaboration and their relationship with Tomas set off a series of events that, unbeknownst to them, engulf their mother and that lead to murder, something that the village cannot forgive and Framboise cannot forget.

The story takes place when Framboise, the narrator, is nine. Now a widow in her sixties, she returns to the village of her birth and opens a café on the family farm. Her married name allows her to hide her identity. In spite of the time passed, the townspeople remain hostile to the Dartigen family that they had forced to flee after the war—they blame Mirabelle for causing a local tragedy during the Nazi occupation.

With resolute honesty, Framboise shares her childhood memory and her mother’s account of events she gleaned from her mother’s cookbook-cum-diary. But as much as a memory, her story is a confession and a plea to her two daughters to understand and accept her past. She is determined not to repeat her mother’s mistake. “No disaster will strike if I dare to love you,” she tells them.

Harris, who is also the author of Chocolat, writes so richly, forcefully, and vividly that you will follow all the details and undercurrents of Five Quarters of the Orange with equal gusto, be it history, family dynamics, village characters, fishing, gardening, or mouthwatering recipes.