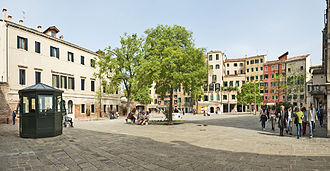 The main square of the Venetian ghetto. Photo from: https://en.wikipedia.org/wiki/Venetian_Ghetto

Between June 19 and November 13 the Doge’s Palace in Venice hosted an exhibition “Venice, the Jews and Europe 1516 – 2016.” It commemorated the 500th anniversary of the first walled-in Jews-only section of the city known as the ghetto. The Senate of the then-mighty Republic of Venice established it on 29 of March, 1516.

It started with 700 Jews who lived in the city at the time. This community consisted of locals and of those who escaped the Inquisition that was spreading in Europe. In this cosmopolitan climate, ideas, knowledge, experiences, culinary traditions mixed and flourished. They fused into the force that contributed to the 19th century growth and prosperity.

In 1797, Napoleon tore down the gates and pronounced the end of segregation.

In the almost 300 years of isolation, the ghetto had to expand and skyscrapers (buildings up to 8 stories high) were erected to accommodate the swelling population.

Formally, the united Italian state that included Venice eliminated the requirement to live within ghetto walls in 1882. Now, over 200 years after the French revolution, few of the 450 Venetian Jews live where the ghetto used to be.

Have you reached a verdict?

Another event that marked the anniversary was the production of “The Merchant of Venice.” It was performed during the last week of July in the main square of the ghetto. A mock appeal of the infamous Shylock and another character, Portia, followed one of the performances. Five judges heard the case, among them the United States ambassador to Italy and the Justice Ruth Bader Ginsburg.

The distinguished panel took its responsibilities seriously. it devoted 2 hours to hearing arguments and half-hour to deliberations. It decided to ignore Shylock’s demand for a pound of flesh but to quash the condition that he convert to Christianity.

The judges also ruled to restore his property though without interest (the statute of limitation had passed, after all). And they sentenced Portia, for her conning, to attend law school in both Italy and the United States. A friend of mine who was in the audience reported that everyone was enthralled.

Venice, like many places in Europe, imposed a distinctive form of clothing on Jews. Men wore round capes and red hats, women wore red kerchiefs. The enforcement lacked passion but there were always enough fanatics watching for lawbreakers. Many of the older generation of ghetto dwellers who lived to see equality continued to wear red hats out of habit.

While the concept of ghetto became shameful, except for the Nazis, the word lived on. Although its origin is still being debated, it sprouted a metaphorical meaning that has grown dominant—an area segregated economically or racially. From a governmental institution it became a social phenomenon.

Even an entire country can be a walled-in ghetto—the Soviet Union and North Korea come to mind. At least in Venice the ghetto inhabitants conducted their business and interacted with the general population during the day. The Iron Curtain, on the other hand, had no keyhole, let alone gates. If you lived behind it, there was nothing metaphorical about the life it enforced or the mentality it shaped.

It’s always a good time to visit the City of Canals though I could kick myself for missing the exhibition and the mock appeal. Another thing I missed – the “falafel of the Jewish Venice,” the Gam Gam restaurant located at the main entrance to the ghetto. It’s closed on Friday and Saturday unless you’re Jewish, that is. If you are, you get a free meal.

Patrons unanimously described the food as fabulous. The cuisine is a combination of cooking traditions of the Jewish migrants who found safe haven in Venice over the centuries. Mediterranean, Spanish, German, Bukhara. The restaurant serves falafel, humus, artichokes, eggplants, Bulgarian peppers, peas, garlic, almonds, cinnamon. And it bakes its bread and pastries. Mmmm…