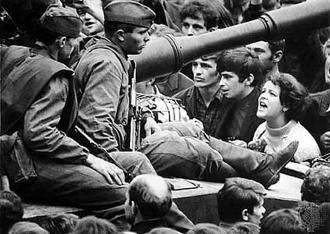 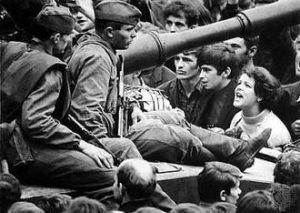 Prague Spring of 1968. Czech citizens argue with the soldiers of the occupying Soviet Army. Photo from: http://drugoi.livejournal.com/2467088.html

Avram, Rakhil, and Polina’s move to the cooperative took place in the summer of 1972 (Read the story in Babinsky, Gnoyensky. 10: Brezhnev; Voice of America; Emigration).

As Polina was leaving our apartment for the last time, she whispered in my ear, “Don’t be upset. I’m always here. Even after I’m not here.” So, for the last six months of her life she had her own room.

Dima constructed a mini-closet over our front door and hired an artist-turned-house-painter to decorate the walls. He found blat to procure East Germany-made gas stove and kitchen table, a bidet that served as a laundry basket, and, after months of daily sign-ins at the furniture store to tick off our name, we took ownership of a Czech-made wardrobe and a Romanian-made bookcase wall unit.

The wall unit was almost full but there was no such thing as too many books. Good books were deficit on par with imported clothes. To alleviate the book shortage, the government began a paper-recycling-drive in exchange for the most popular titles.

Twenty kilograms (forty-five pounds) of paper equaled a book. In a world of thin newspapers and void of advertisements, it took forever to amass that amount. Dima returned from the recycling center with the coupon authorizing registration at the designated book store. And with the paper. The man at the center had weighed it and, for three rubles, the price of a half-liter bottle of vodka, gave it back to use again.

We kept book stores in crosshairs on every errand. At second-hand stores we collected, one by one, twenty-nine out of thirty volumes of Charles Dickens; twenty-six volumes of Emile Zola, my genealogical inspiration; chess books; structural construction tomes; and a fair assortment of bilingual technical dictionaries.

And, in an incredible stroke of fortune, a person next to me who must not have realized the black market value of the complete works by Samuil Marshak (a renowned poet, an eminent translator of Shakespeare and Robert Burns, the founder of the Soviet children’s literature) sold the four volumes to the store at the negligible official price. 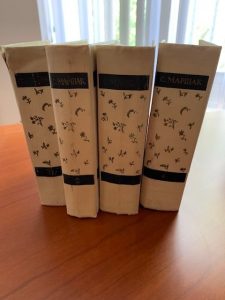 The saleswoman slid them under the counter and refused to sell them. I remembered that Avram’s friend headed the bookkeeping office at that store. Feeling like a lottery winner about to be robbed of the ticket, I found her and introduced myself. “Give my name at the counter and my regards to your dad,” she whispered.

Lips pinched, the saleswoman handed me the books for three rubles and fifty kopecks. Blat was not overrated.

In August 1968, the Soviet Union invaded Czechoslovakia for introducing liberal reforms, namely the repeal of censorship and political surveillance. The Prague Spring, or socialism with a human face, had disrupted the unshakable commitment to the spirit of Marxism-Leninism and proletarian internationalism.

Like all intrusions, the invasion was explained in terms of aiding a comrade. Newspapers published photographs of Czechs conversing with stone-faced Soviet soldiers as proof of popular support. Per the Western stations, these were locals committed to nonviolent resistance who were conveying their displeasure to the invading army.

The Soviet Union acted as though the invasion was merely a good-natured tsk-tsk at a younger brother temporarily led astray.

The Voice of America and others brought that affability in perspective: the invasion had caused consternation for the Western Communist parties (in spite of their complete financial dependence on Moscow) and, worse, anxiety in Soviet allies and the non-Russian edges of the Soviet Union. To them, intimidated beyond any thought of resistance, the tanks in Prague meant one thing: if ever the big brother loosened his reins—run far and fast.

From the same sources we knew that several Moscovites protested in the Red Square; the militia promptly arrested them and the court as promptly convicted them of anti-government activities or condemned to psychiatric wards for treatment of “slow-motion schizophrenia” (that diagnosis, later removed from Soviet textbooks, reflected the logic that only a mind with diminished capacity could be dissatisfied with the Maliche.)

But they dared to speak out. Precious few did. We felt beholden to them and ashamed of our cowardice.

In the beginning of 1969, on a business trip to Moscow, Dima ran into his former classmate, Isaac, who had applied to emigrate. His father, Polina’s landsman, the former shokhet of the Kiev Bessarabka market, beat down high-ranking doors claiming that he, a religious man, had to live in Israel to properly observe his traditions.

Per Isaac, the Party had a directive on the books to allow emigration of up to fifteen hundred a year. Two groups got the green light: the elderly without higher education and those befuddled by religion, “the opium of the people,” that exerted harmful influence on others.

Isaac’s family paid 40 rubles per adult, and got out in record time—after all, the freedom of religion was carved in the stone of the Stalin’s constitution. Dima traveled to Moscow again to extract more details but Isaac had already left. The restive word emigration hunkered down in the back of our minds.

Besides work, Dima designed experiments for his post-graduate project and prepared midterms and finals for engineering students. I shopped, cooked, darned, replaced buttons on Dima’s shirts fractured by the laundry service, took a dressmaking course, and mended clothes for Emily and myself.

I was particularly proud of a dress I fashioned for Emily from Dima’s pants. I embellished it with clasps from her old sandals; women stopped me in the street to ask where I got that outfit.

We read to Emily, took her to the playground, museums, the circus, and the library. We entertained and went to the movies. We squirreled away facts Avram and Rakhil garnered in their sessions with Voice of America.

We were getting more and more anxious – as the saying went “cowards leave, risk-takers stay.” And we were definitely cowards.