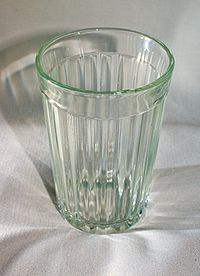 Faceted glass. Used to drink beverages, alcohol, and as measurement at the markets. For ex., a glass of strawberries or cherries (https://ru.wikipedia.org/wiki/Стакан)

Do you know that Russia has a Day of Faceted Table Glass? It honors the Soviet version of the faceted glass, with a smooth ring, produced first 75 years ago, on September 11, 1943. It was the centerpiece of the era and its cultural icon.

The capacity of the glass remained unchanged over the decades – 200 milliliters up to the smooth ring, 250 to the brim. It was an indispensable part of life. A universal unit of measure in recipes and at farmer markets. Dough cutter. The way to serve liquids in eateries, kindergardens, schools, trains and at home. 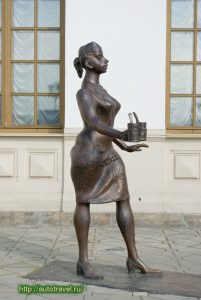 The center of the fizzy-water dispensing machines from where drunks occasionally borrowed the glasses and always returned. 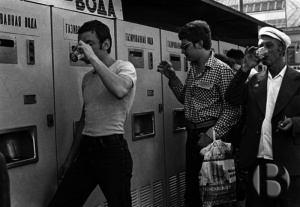 Machines dispensing fizzy water into faceted glasses rinsed by pressing them over a small water fountain next to dispenser. Photo from: https://ofigenno.com/fakty-o-granenom-stakane

A vodka-filled glass was a meal in itself, usually followed with a bite of bread. And it was the main feature of a proper meal, whether on a dining room table, park bench or anything in between. Fatback, sauerkraut, pickled (not marinated!) cucumbers, dark bread, herring, a yellow onion (and green, in season) played supporting roles. 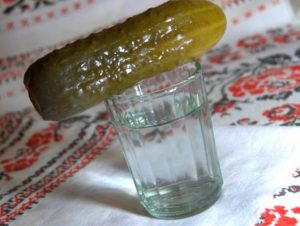 Snack of faceted glass of vodka with pickled cucumber. Photo from: https://fishki.net/1206575-8-interesnyh-faktov-o-sovetskom-granenom-stakane.html

Open sandwiches constituted the entrée. Dark bread topped with any combination of the above plus a slice of hardboiled egg.

Even as progress and the fall of the Soviet Union made the faceted glass a collector’s item, its nostalgic pull is alive. In 2003, the record book of St. Petersburg registered a pyramid 1,5 meter high created with  2,000 faceted glasses. 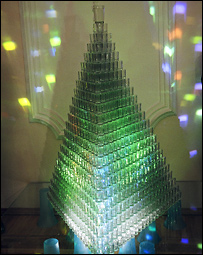 Pyramid made from faceted glasses. Ekaterinburg, Russia. Photo from: http://news.bbc.co.uk/hi/russian/russia/newsid_4012000/4012481.stm

Soon, this record was broken.

This expression entered the Russian language in 1958, when, in an attempt to reduce alcoholism, Khrushchev forbade the sale of vodka in small shots or in small bottles. People used to purchasing a shot of vodka on the way home from work were now forced to consider a half-liter bottle. Too expensive and too much – the demand was supposed to plummet. 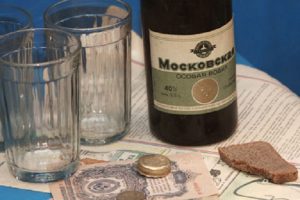 Well, Khrushchev apparently did not take into account that where there was a will there was a way. Quickly, the habitual one-shot-of-vodka customers discovered that half a liter divided perfectly into three faceted glasses filled to the smooth ring. Much more than a shot but what the heck!

So, a bottle was shared by three, usually chance buddies, outside the store, in a nearby park, or under the stairs of a lobby. To attract attention, one raised a ruble bill at the entrance to the store or at the liquor counter.

To be fair, the country celebrates All-Russian Sobriety Day on the same day it remembers the Faceted Glass. The Orthodox Church established it in 1913 evidently dissatisfied that only less than half of Russian men were teetotalers.

Four years later, a new regime swept into power. Drunkenness was the least of its worries—religion being the opium of the people was way more harmful than vodka. The clergy went underground, most literally, some figuratively; the holiday was forgotten, teetotalers became a statistical rarity.

Fast-forward seven decades and, overnight, the religion roared back. Again, on Sobriety Day, churches urge vows of temperance and lead anti-alcohol prayers and processions. Secular events take place as well. Unlike 105 years ago, however, taverns do not close and stores sell liquor. How else could one celebrate, especially that some places celebrate for 3 days?

The annual consumption of hard liquor in Russia has reached 18 liters per person, more than double of what the World Health Organization considers the beginning of societal degeneration. But, how does one measure degeneration?