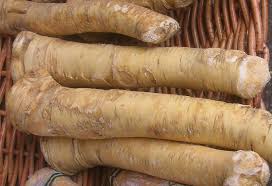 I was six and determined to get to the bottom of the reason my mother was adamant that we leave the house every time my father grated horseradish roots. Lesson learned – my eyes did not forget the sting.

Passover is around the corner, no wonder my thoughts are on horseradish. Back in Kiev when one happened upon fresh fish at a store—a queue of any length and duration was worth the effort—one immediately ran to the market for the horseradish roots as soon as the fish landed in one’s avoska. What is gefillte fish without horseradish?

Throughout the year no food was considered Jewish or not Jewish but, at Passover time, gefillte fish and horseradish made Seder as we knew it. If there was no fish in stores or if it ran out before your turn came you headed to the market and paid the market price.

My bábushka had to adjust the recipe because, she said, my mother and I would touch nothing with even a speck of vegetables in it or on it. So she sliced the onions, beets and carrots just the right thickness to not stick to the fish.

She removed the fish meat with surgical precision leaving the skin paper-thin and intact. For Peisach, she mixed in matzo meal made with a rolling pin the night before into the grounded fish. Normally she used bread.

Then she added eggs and salt, gingerly filled the cavities, rolled fish balls from the extra mixture, and lowered the treasure onto the blanket of vegetables for three hours. Every quarter hour she poured the beet-colored liquid from the bottom of the pot over the fish to pretty it up.

Our first real Seder took place, of course, in the United States at a volunteer’s house. They served no fish, just fish balls, all of identical size and shape. After six months in Chicago, I already knew of gefillte fish sold in jars but had never seen how it looked, so I admired the hostess’ talent. Other than that, the event ended in disappointment for both sides. Read about it in Babinsky. Immigration (1976 – 1977).

That night, we learned the hard way about Seder plates or dipping symbolic foods in salted water or hiding a piece of matzos for my daughters to find or about the existence of a long ceremony that made Peisach, Peisach. The host family was taken aback by our ignorance. We were bewildered.

That Passover, I made gefillte fish too. It would be a shame not to take advantage of the ingredients that were so effortlessly available. The fish turned out not quite like bábushka’s but not bad, either. The ready-made horseradish was so sharp that I had to doctor it with sugar.

I don’t remember making gefillte fish from scratch again—the availability lost its novelty quickly. We accepted what came in jars. Not as tasty as bábushka’s or even mine but, now that I was American, a jar beat grinding fish mixture or grating horseradish any day. Actually, are horseradish roots even sold in stores?