Enchantress of Numbers: A Novel of Ada Lovelace, by Jennifer Chiaverini 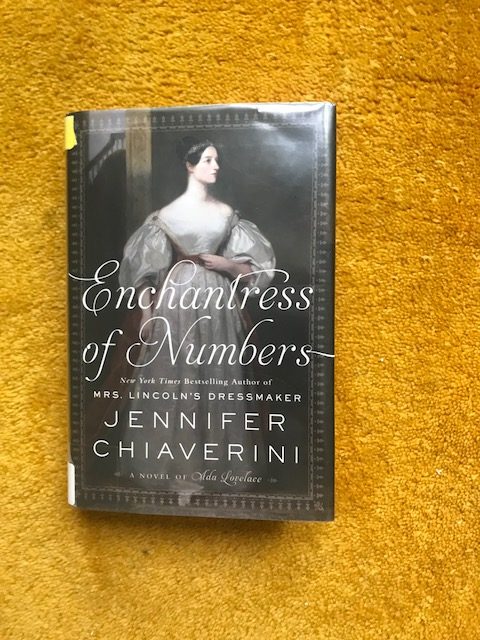 31 Jan Enchantress of Numbers: A Novel of Ada Lovelace, by Jennifer Chiaverini 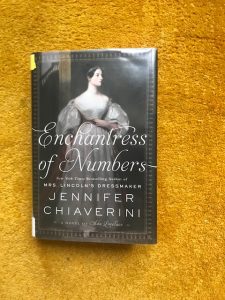 Enchantress of Numbers: A Novel of Ada Lovelace, by Jennifer Chiaverini. Dutton. 2017

Enchantress of Numbers is an illuminating tribute to the visionary who 200 years ago wrote the first computer program and who foresaw our computer age. She was Ada Byron, Lord Byron’s only legitimate child – some say that was enough to destine her to trail blaze.

Her parents, Lord Byron and Annabella, “were an unlikely pair, the passionate, headstrong, irreverent poet and the prim young woman for whom virtue, reason, and self-control were guiding principles.” He had the reputation of genius, romantic, immoral, depraved, revered.  She was a royal-blood heiress and daughter of the Prime Minister Lord Melbourne’s first cousin.

A prodigy in mathematics, science, and languages, she kept abreast with technical advancements and later founded industrial schools. She was also concerned with the working conditions, wages and humane treatment of the poor.  Byron was “one of the few people… whose intellectual powers equaled her own.”

As a husband, Lord Byron continued to stay out all night, drink heavily, and consort with actresses. But since he did not beat or confine his wife she had no legal right to object to his conduct. A logical thinker, Annabella tried to find a scientific reason and remedy for his behavior. She found opium and a book by Marquis de Sade, after whom the phenomenon of sadism was named, in his room.

Annabella left her husband when Ada was seven weeks old. Known as The Separation, the scandal was so devastating to Lord Byron that he was forced to leave England never to return.

Following the separation, Annabella set out to safeguard her only child from the destructive influence of the main component of Byron blood – imagination. She banished fairy tales and poetry, filling Ada’s life instead with rigorous education in math, science, and chemistry, with fostering logical reasoning and restraining imagination.

Sentimentality had no place in Ada’s upbringing. To speed up Ada’s teething, her mother sliced her gums with a lancet. She fired every nurse and governess for whom the child showed fondness. Of toys, she allowed only blocks and balls because they were useful for learning geometry and motion. The principle was “an hour not spent in self-improvement… was an hour wasted.”

Annabella’s most intellectual friends taught Ada mathematics, French, German, Latin, history, geography, philosophy, natural science, music, and moral development. Ada thrived. To let in some imagination, she reasoned that “the rule is against telling fairy tales, or reading them. The directive says nothing about thinking them.”

Introduced into London society, Ada soon discovered the intellectual circle she yearned for. Her friendship and collaboration with Charles Babbage, the inventor of the Difference Engine, the precursor to the modern computer, became the center of her life. Many scholars believe that the algorithm Ada wrote for Babbage’s Difference Engine to generate a table of Bernoulli numbers is the first computer program, making her the first computer programmer.

With each passing year, Ada believed less and less in her mother’s ominous warnings of the danger of imagination. Charles Babbage encouraged it and so did other friends:  the mathematician Mary Somerville, Michael Faraday who experimented with electromagnetism, Charles Wheatstone who recognized the invisible sound waves.

Ada understood that there was no need to choose between her mother’s intellect and her father’s imagination, after all. She was “nothing without both.”

As she and her mother toured London factories she found the cotton-spinning mill especially fascinating. Its Jacquard loom created fabrics with elaborate designs by coding the weaving instructions into punch cards. So, if punched cards could control a loom, why not another device, like the Difference Engine, for example. Why not other calculations?

By now, Ada came to appreciate how forward-looking her mother was in the era when most parents “believed that the strain of abstract thought would injure the tender female frame.” In other words, she did not subscribe to the prevalent notion that “a lady should sit demurely and take instruction.”

In choosing a husband, Ada looked for kindness, intellectual curiosity, and a passion for mathematics and science. She wanted him to respect women’s genius. And not to expect her to abandon her intellectual pursuits. He would control every penny of the wealth that came from her mother because “as a mere woman, a wife,” she was entitled to only receive “pin money.” But if marriage could not bring independence she hoped it would be less domineering than her mother’s regimen.

Ada found these qualities in Lord William King. He knew several languages, implemented scientific discoveries in farming, and developed his own innovations. Like Ada, he revered Mrs. Somerville who mathematically predicted the existence of the planet Neptune before it was discovered. He considered it outrageous that while the Royal Society celebrated her accomplishments and used her books, it refused her access to its library because she was a woman.

Ada’s own publication that first met with approval was discounted after female authorship was disclosed. Scientific reasoning “could not be as sound if it had come from a female mind, the subject not as significant if it had been entrusted to feminine hands.”

After receiving a peerage, William adopted the name Lovelace. Ada Byron King, Countess of Lovelace, died of cancer at the age of 37.

A Portrait of a Woman and Her Times

In Enchantress of Numbers, Jennifer Chiaverini paints not only a fascinating portrait of Byron’s daughter and the story of her quest to become her own person.

It’s also a portrait of her extraordinary mother. It’s also a panorama of the era of the industrial and scientific progress that inspired Ada’s insatiable curiosity and her foresight into what would shape the future.

One can’t help wondering how different our times would be had not Ada Byron passed away so early.