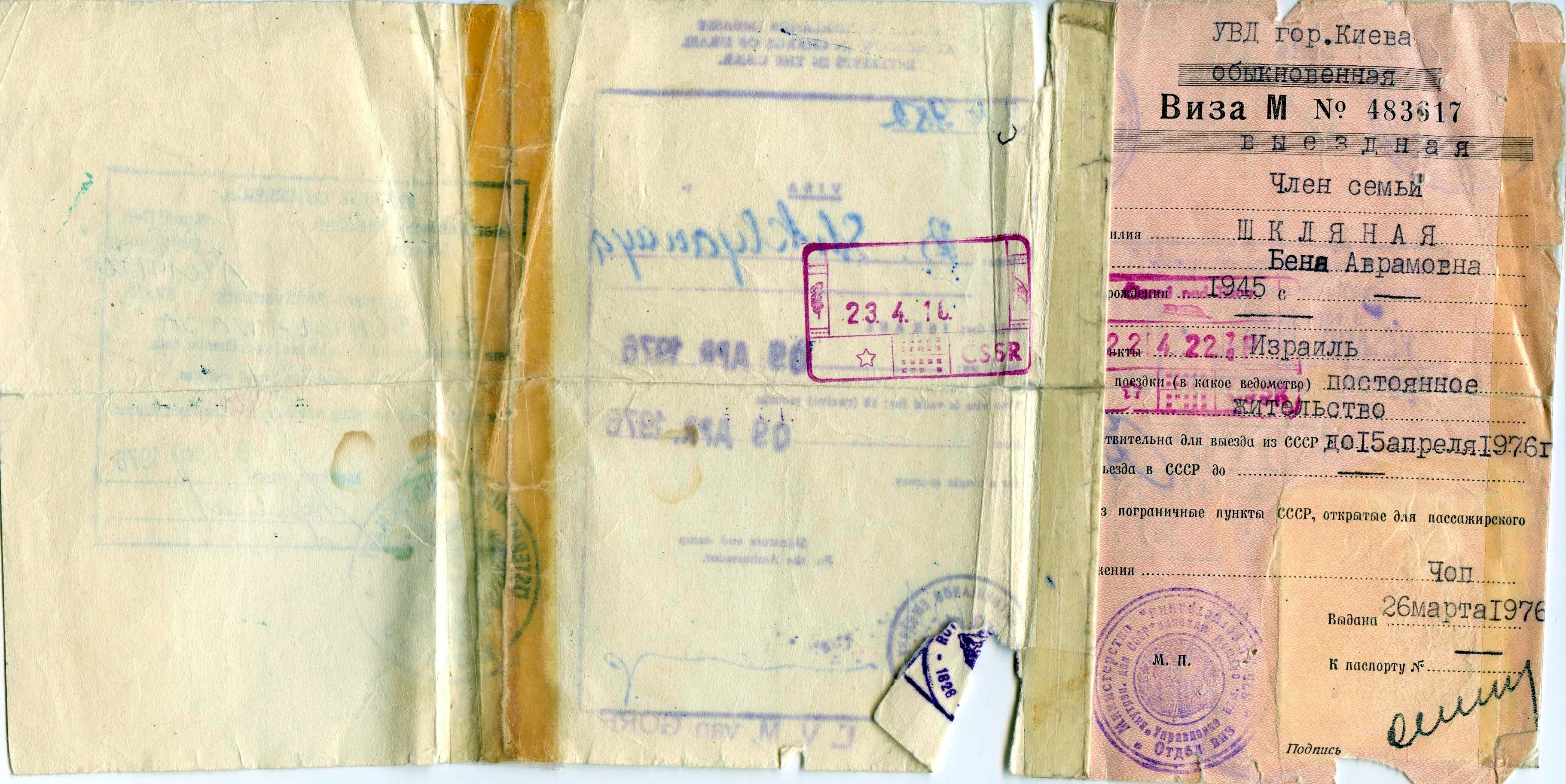 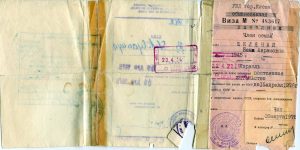 Front side of the exit visa from USSR issued on the March 26, 1976, by the Administration of the Ministry of Internal Affairs to Bena Avramovna Shklyanaya, born in 1945, for the purpose of permanent relocation to Israel. Valid to April 15, 1976 (the red stamp extends validity to April 22).

What to Expect After Crossing the Border

Letters reported the demand whims of the Rome flea market. Success in selling a screwdriver, a condom, a nested doll, or a flowered kerchief sent everybody on a quest for tools, condoms, souvenirs.

All the senders agreed that photo and video equipment was a sure thing flea market-wise. Syuta, as a separate family, could take a camera and a lens, too.

And, as luck would have it, an acquaintance gave Dima a handmade wood-carved chess set, our big-ticket item for the flea market.

We were limited to one purse per woman, one briefcase per man, two bags per person, each containing either household stuff or used, i.e. carrying no labels, things that belonged to that person. An underground cottage industry sprung up that produced duffel bags from military-grade canvas.

As a matter of principle, definitely not common sense, we purchased the maximum allowance of duvets and sheets. A  total of 50 each (ten per person). The 50 pillow cases I had to sew myself to fit our non-standard size pillows. Most were not some ordinary pillow cases but made of damask cotton that, per Rakhil, never-ever wore out and was aristocratic, to boot.

Here was proof that, as she said many times, if I needed something badly it would magically materialize—one day, just as I walked into the central department store damask returned from its decade-long sabbatical. Its appearance was so brief that within an hour, when I returned with money to get more, the shelves were already empty again. The damask was snow-white with a flowery pattern differing in sheen. Bed linens were not eligible for shipping, they had to be hand-counted by the customs officers at exit time. (For better or for worse, damask does not wear out. Not as snow-white after half-century of service, these pillow cases are as sturdy now as on their first day.)

Frame by frame, my mind envisioned, as best it could, the collage of Vienna and Rome—we would need pots and pans; enamel dishes and mugs (nothing breakable); utensils; a portable electric stove; an electric teakettle; an immersion heater; salt; baking soda to treat sore throat; starch to treat diarrhea (yes, we brought our ancient thick-glass jar — if it survived both World Wars it would survive emigration); 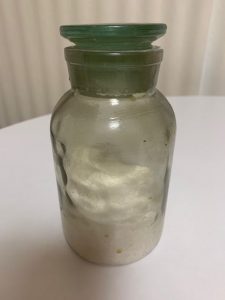 Jar used to store starch. Beginning of the 20th century.

packs of cotton wool for my periods, medications for Emily and Syuta; clothes; children’s books; sewing implements. In case the HIAS stipend was not sufficient, we would pack bread, hardboiled eggs, salami, tea, sugar, farina, and buckwheat.

The postcard with the summons to OVIR showed up in our mailbox on Friday, March 19. Two restless nights later, Dima and I, holding trembling hands, joined a group of two dozen in the waiting room.

The militiaman guarding a desk with a phone on it called out names in alphabetical order. That put us on the bottom of the list (“Sh” sits toward the end of the Cyrillic alphabet.) Encouraged by the relieved faces of the families ahead of us, we entered the room behind a polished door.

A man with a buzz cut recited from a sheet decked out with the USSR National Emblem: the Union of the Soviet Socialist Republics had charitably agreed to approve our unification with kin in the state of Israel. Exit visas to be issued on March 26 effective through April 14, provided all the fees were paid and photographs furnished as follows: the head of the family pictured with the older child, no photo of the child under two. Children to be listed in the visa of the head of the family.

Without raising his buzz cut, the man gave Dima the sheet. We thanked him and, heads down, backed out into the waiting room. I grinned at the militiaman: “May I use the phone?” My audacity rendered him speechless. “Just for a second. I’d like to tell my parents that we got the permission.” Not trained to handle unforeseen complexities he nodded.

The last month passed in a fog. We had three days to cancel our phone service and return the telephone set to the hotel Druzhba to whose intercom we were connected. A former colleague lent Dima another set. We could dial out when the neighbor in the apartment above us with whom we shared the line did not use the phone.

The wife, a no-nonsense Ukrainian woman, ruled her two teenage sons with hedgehog gloves, to use a Russian expression. Judging by the surname, the husband was Jewish. It did not take long to realize that they put down their receiver once they heard us speak. Thus, they gave us a free reign of outgoing calls, though outwardly the wife became more detached when we ran into each other. We were especially touched by the solidarity of the teenagers.

On March 26, we received our visas authorizing exit from the Soviet Union before April 15. (When Emily had a fever attack a few days later we extended the effective date to April 22 to let her recuperate.)

From a public phone, we invited everybody we knew to our goodbye party if they were not afraid to come—one could not be too careful. We set up tete-a-tete’s with those who either wanted undivided attention or preferred not to be observed consorting with traitors. We saw everybody for the last time.

The reality of our departure closed in painfully on our dearest friends most of whom, incredibly, had clung to the fantasy that we had been just talking the talk. They gazed at us mournfully.

My lifelong girlfriend made the sign of the cross over me: “Of course, you should leave. If I were Jewish I would leave this accursed country.” Her sentiments stood out – the common question at the other farewells was “tell me again why specifically you are taking this step?”

Early morning on April 9, Dima and I arrived in Moscow to open the entry visas to Israel at the Netherlands Embassy. We also carried twenty-seven pages with names and addresses, each page representing a family requesting an invitation from Israel.

We ran to the ticket office to get a ticket on the return train that night (round trip tickets were an unknown). Five rubles peeked out of Dima’s passport to preempt the habitual “no seats available.”

At nine in the morning, we presented ourselves to the Soviet guard in front of the embassy. He glanced at our exit visas and let us through.

In the office, a woman behind a window took away the visas and told us to return at three. She did not blink at the sound of the twenty-seven pages flopping into a tall receptacle next to the window.

We sprinted to the famously well-supplied Moscow department stores. We were in luck. First, a line for Hungarian-made blue-and-gray-checked women’s pant suits. Then a crowd clamoring for Czech-made wool coats with attachable hoods for toddlers.

And, for dessert, East Germany-made bras. Mounted militia controlled the mob of delirious women screaming out bra sizes. I shoved and elbowed and pushed. Dima looked like somebody witnessing a mental ward breakout.

He asked what my size was and, taller than the crowd, yelled it out and raised two fingers to indicate quantity. That exceeded the limit of one-per-person but as a man he had authority. As he passed down the money, the saleswoman sent the booty his way. Now I had decent lingerie to wear in the West.

Back side of the exit visa from USSR issued on the March 26, 1976 to Mikhail Moiseyevich Shklyanoy, his daughter Emilia, and his daughter Polina, for the purpose of permanent relocation to Israel. Valid to April 15, 1976 (pale-blue stamp extends it to April 22). The middle panel is the entry visa to Israel issued on April 9, 1976, by the Royal Netherlands Embassy in charge of Israel interests in the USSR; valid one year. The right panel is an entry visa to Austria issued through Netherlands Embassy on April 9, 1976, by the Austrian consulate in Moscow; valid three months.