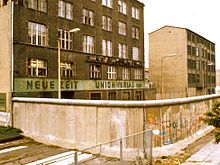 Berlin Wall in 1984. The smooth pipe on top made it more difficult to scale. Photo from: https://en.wikipedia.org/wiki/Berlin_Wall

Known formally as the German Democratic Republic, or GDR, this state was established in 1949 in the Soviet Zone, the area occupied by the Soviet Army at the end of World War II. It was a satellite of the Soviet Union during the Cold War period. It did not include West Berlin, the part of Berlin occupied by the forces of U.K., U.S., France, and other Western-allied armies.

East Germany’s economy was the richest among the Eastern Bloc. It was state-owned and centrally planned. To stump out the emigration to the West, a wall was erected in 1961 on the border between East and West Berlin known as the Berlin Wall. Several hundred people who attempted to climb the wall were killed by guards. A large area of East Berlin adjacent to the Wall was laid to waste in order to make stealthy approach to it impossible.

The Wall was taken down in 1989. East Germany was dissolved in 1990 and became part of unified Germany. 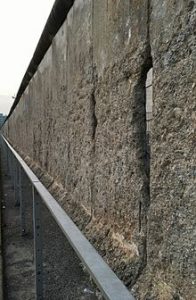