Do You Live in America or Visiting? 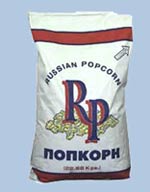 22 Jan Do You Live in America or Visiting?

Russian popcorn made in the city of Krasnodar. Photo from: http://www.rpopcorn.ru/zern.htm

Who and when in times immemorial had first put to use the amazing property of corn kernels to explode from the heat is unknown. But we do know that January 22 is the date when popcorn was introduced to Europeans by Native Americans in 1630.

I’ll explain later what made this fact important enough to post about.

As we were taught in the Soviet Union, Russians had invented much of what was around us – perhaps even the wheel, who knows? For the most part, they were simply too meek to demand credit. So, it’s safe to assume that way before the Indians, Russians made their own kind of popcorn from oat. The grains soaked until they expanded then went into the oven to dry quickly. The large airy grains made a nutritious snack or, with cold water, porridge. Yummy! But you won’t know until you try.

The popcorn that America forces on Russia does not compare with this homespun treat. Still, spiritually weak Russia took the easy path: it produces American popcorn, using American machinery to sow, irrigate and harvest. It calls it air-corn but that doesn’t fool anyone.

America is everywhere in Russia.

Mayor instead of Head of the City Soviet – unthinkable! All social groups treated equally, no one ensuring that one says and writes the right thing, undeserving groups allowed their own publications.

By the way, calling a computer a calculating machine did not stop Russia from launching the sputnik long before the almighty United States. Just saying.

America made it its mission to stifle Russia’s superior science and culture, to wreck its values, to bury it under iPhones, Hollywood, McDonald’s. Russians are simply too trusting.

The above is the compilation of the notes I took while listening to a visitor from Russia. We met at the San Francisco airport waiting for the flight to Chicago two months ago. She sat a few seats away in the almost empty waiting area.

“Do you live in America or are you visiting, too?” she asked. I cautiously confessed to the former. Her Russian did not startle me (she heard me speak on the phone in Russian), the question and the cross-examining tone did. She sidled over, shook my hand firmly, asked for my name and gave hers: Larisa.

When the next question came “Are you familiar with air-corn?” I knew I should take notes. “Yes, please write about what Russians feel,” she said. After reading up on the history of popcorn later, I decided to wait until its anniversary, January 22, to post.

Larisa was on the way home to Kaluga after visiting her sister in San Francisco. In her late fifties, she had never been to a large city, but did vacation in Turkey once. She found her sister too Americanized and frivolous and the nephews hopelessly detached and beyond frivolous. Thankfully, she preferred monologue; my comments would not have been welcome.

It was quite an experience to listen to a former compatriot and not recognizing our common background.