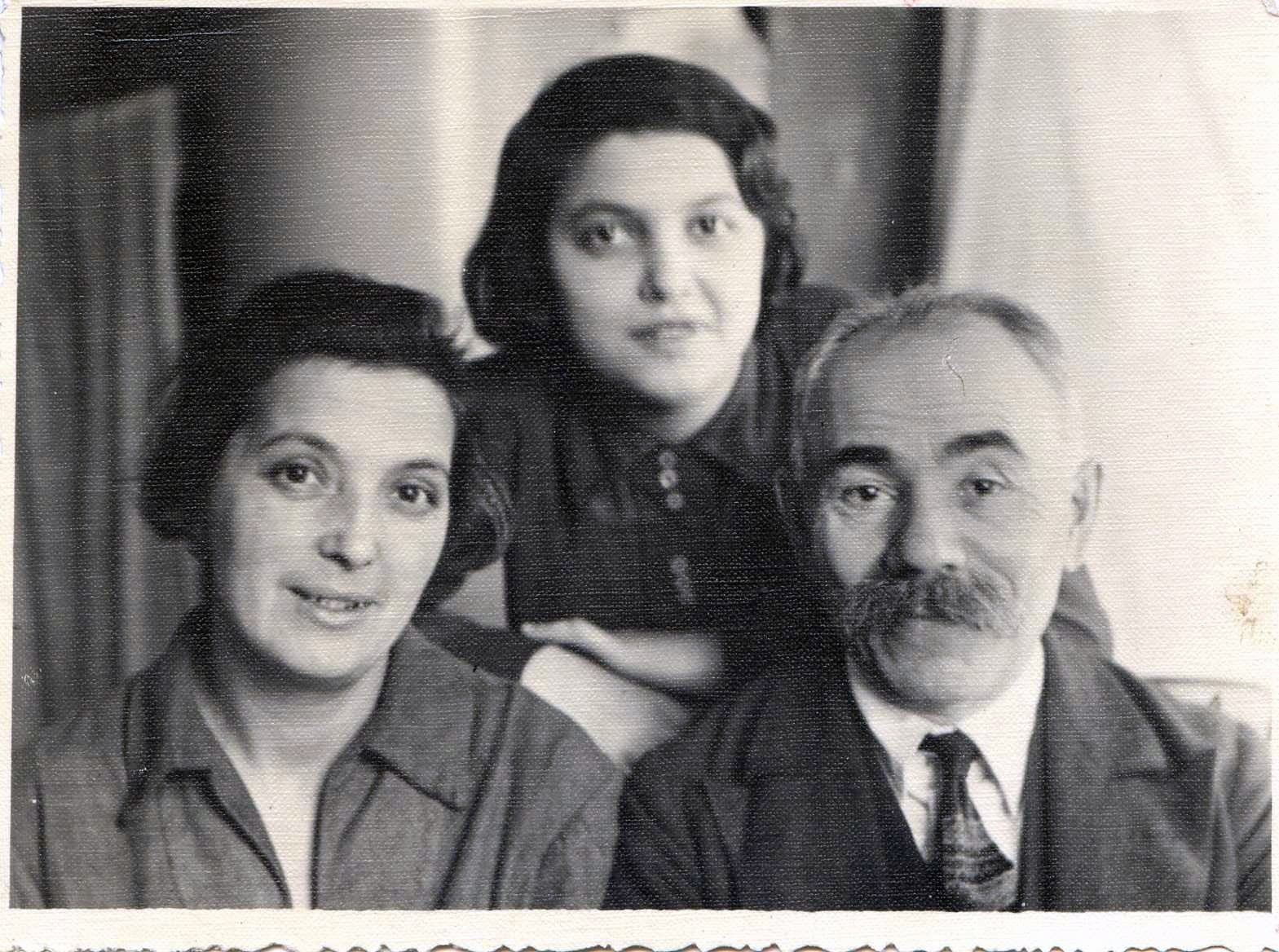 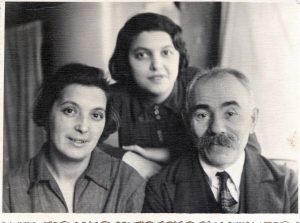 After a loss of nine children, the family greeted Dinah’s robust health as a reward for their suffering. She shared her large eyes with Velvel and serene disposition with Sheina-Gitel. But nobody could tie her exotic gypsy or Indian looks to any known lineage.

She did not actively crave learning but she became the first Averbukh child, the first girl to boot, to receive formal education in an era that forbade educating girls. What would they need an education for? Especially given that study entailed the unacceptable act of writing on Sabbath.

But Khanah-the-queen-bee hatched a scheme to enroll Dinah into a Jewish elementary school for girls in Boguslav and then into gymnasia for girls before returning her home to get married. Khanah and Khaim did not mind her writing on Sabbath, and, Khanah argued, it would not count against Velvel since it would not occur in his house, not even in the same town.

It helped Dinah that the fracturing old canons, her siblings’ deaths, Khanah’s match fiasco, and Avrum’s emigration weakened Velvel’s resolve. It helped Dinah even more that Khanah, nineteen years her senior, had a soft spot for her.

Still, a frontal assault against Velvel was not advisable. Before approaching their father, the girls enlisted Sheina-Gitel’s support. Velvel gritted his teeth at the plan: “Man darf mich nicht mehr (I’m not needed any longer.)” Khanah’s ambition extended to Dinah’s higher education down the road but, shrewdly, she did not voice that option to either parent.

Until the beginning of World War I, Dinah visited her parents often, always accompanied by Khanah. Velvel did not visit them so as not to sanctify writing on Sabbath. Dinah’s graduation from the gymnasia coincided with the peak of revolutionary destruction, pogroms, and epidemics. Khanah refused to let Dinah out of her sight, much less travel; even showing up in the street was dangerous.

But vigilance did not mean isolating Dinah from the company of lovesick males. Dinah’s vivid beauty gave Khanah an opportunity to shine as a duenna.

By the time Dinah’s letter to Velvel asking permission to marry was delivered by the erratic mail service, she was already married. Her, and Khanah’s, choice fell on Yankel Smetanin, a merchant’s son, older than she, dashing and fancy-mustached. 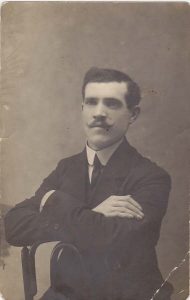 He was in line to get half of his parents’ house, the letter said, and Khanah promised to give Dinah silver candlesticks and a swanky bedcover, testimony that Yankel came from money.

Velvel’s trusted connections in Boguslav conducted a belated derfragen. They informed him that Yankel’s sister Rudya was known as Rudya-die-meshuggeneh. Velvel made his lock-your-mouth gesture to ensure that piece of bad news did not leak outside the family.

Dinah lost her husband to typhus when their baby, Khaya, was six weeks old. Dinah’s in-laws raised no objections to her moving back with Khanah. She spent the next three years supported by the coins from Khanah’s pockets from the sale of her business. Her daughter, a copy of her in appearance but obstinate and prone to fits of fury, demanded all her attention.

Khanah, watching the neighbors spared in the recent mayhem stream out of shtetls, concluded that Dinah should get a big-city husband. She asked her Leningrad cousin for help in the matrimony department.

As soon as a candidate came into view, Khanah and Khaim took a week-long train journey to deliver Dinah and her daughter. When their younger brother Leib met them at the train station he barely recognized Dinah, his favorite sister. She was exhausted and emotionless, her beauty dulled, and her clothes in disarray from trying to keep Khaya occupied.

The candidate worked as an office clerk, an ordinary-looking man, balding, with a mustache, shorter than Dinah and much older. His last name was Levenstein, we don’t know his first name. He had settled in Leningrad several years before, after a pogrom in his shtetl had wiped out his family. (When his wife and children were being murdered he was checking up on his parents; when his parents were being murdered he was running back home through a wooded path.)

Feeling guilty about her slapdash derfragen of Dinah’s first husband, Khanah set out to learn all about Levenstein she imagined Velvel would have wanted to know. She approved, for the most part, but was skeptical about his love for chess and his stomach ulcers.

His eyes crinkled with silent laughter during the interrogation but he answered patiently. It did not take long for Levenstein to propose, Leib thought, out of empathy as much as attraction. Levenstein offered to adopt Khaya but Dinah did not want to saddle him with a difficult child.

Religious ceremonies not part of life any longer, the couple registered their marriage at a government office, from where they took public transportation to Levenstein’s small room in a communal apartment on the far outskirts of the city. Khanah reluctantly vacated the guardian’s position she had grown into.

Dinah spent her days in search of food to ensure that her husband got his meals not simply fresh but right out of the oven and that her daughter was well nourished. Ten years later, she transferred Khaya, now Russified to Raya (short for Raisa), to a city high school.

Khaya stayed with Leib and his wife Musya in their narrow high-ceilinged room in a communal apartment. After graduation, she returned to Dinah and enrolled into a teaching college.

The Siege of Leningrad

Khaya was nineteen when the Eastern front of the World War II reached the Soviet Union on June 22 of 1941 where it was called the Great Patriotic War.

By September, the German army encircled Leningrad. It was stopped a short distance from Dinah’s house but bombs and bullets fell close to it every day. As the siege continued, the food rations shrank to next to nothing. In spite of Dinah’s valiant efforts Levenstein soon died of hunger.

The Red Army carved out a route over Lake Ladoga to bring in supplies and munitions and to evacuate civilians. Trucks were used when the lake froze over, watercraft the rest of the year. The route was dubbed the Road of Life, except in the winter when it was also known as the Road of Death.

In the spring of 1942, Dinah joined the crowd gathered by the station day and night. She was hoping to eventually get on a train that would take her and her daughter to the lake and onto a boat out of the city. Khaya brought her mother the bread ration every day. But one day she was told that her mother had died of hunger the night before and was taken away for burial in a common grave.

As the Nazi incursions into the neighborhood of Khaya’s almost empty apartment building got more frequent she stopped going outside. The janitor, a seventy-five-year old man, brought in some water, shared the few onions he managed to grow, broke up her furniture to feed the stove but they knew he could not protect her from the Germans. She was young and, worse, she looked unmistakably Jewish.

When he decided to move closer to the city where he had a little hovel, Khaya had no choice but to cling to him. She left a note with her new address at the apartment. All skin and bones, she fit into a burlap coal sack that the old man half-carried half-dragged across a chunk of no man’s land to her new home where she survived part of the siege until either a truck or a boat took her across Lake Ladoga.

She then fell in with a group of partisans whose leader let her peel potatoes for the remainder of the siege, then provided her with an identification document where he listed her nationality as Russian. (Years later, an alert Kiev official caught the discrepancy between her papers and her features and entered the appropriate nationality, Jewish, into her passport.)

When the siege was lifted, Khaya made her way to the janitor’s place; incredibly, the old man was still alive. That was where Leib found her when he returned from the front. He offered to adopt her but she chose to reunite with her aunts in Kiev.

Read about Dinah’s parents and siblings in Averbukh, Kuppershmidt