Daughters of the Samurai: A Journey from East to West and Back, by Janice P. Nimura 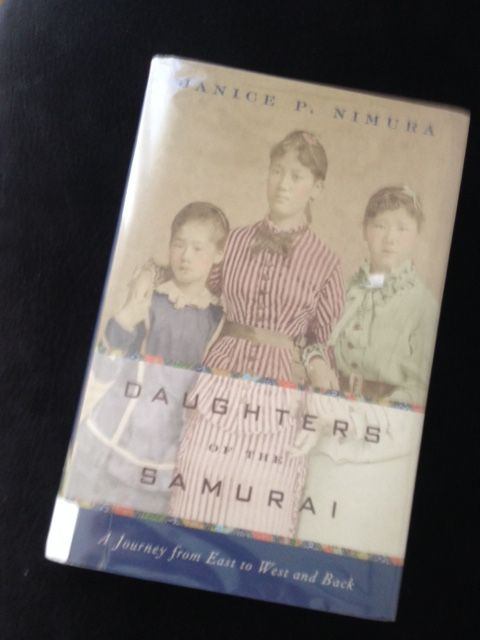 31 Oct Daughters of the Samurai: A Journey from East to West and Back, by Janice P. Nimura 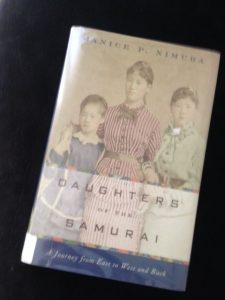 The Daughters of the Samurai: A Journey from East to West and Back, by Janice P. Nimura. W. W. Norton & Company. 2015.

Three girls came to the United States from the mysterious Japan. They did not speak a word of English and had never worn Western clothes. Their empress dispatched these daughters of the samurai, the elite class, brought up in centuries-old warrior tradition, to spend ten years in the world of the “hairy barbarians.” After they received an education and soaked in the foreign customs, the girls—aged 11, 10, and 7—were to return  home to become an example to women of their home country.

“This is the story of three girls who were born in one world and sent, by forces beyond their comprehension, to grow up in an entirely different one,” that’s how the book begins. A true story that reads like a novel.

In 1872 when they arrived, “no daughter of Japan had ever held a college degree, or dreamed of earning one.” By then, a few American colleges had already begun admitting women. Girls in Japan learned to read and write at home.

Fresh out of 250 years of isolation, the Land of the Rising Sun craved Western knowhow and it intended to catch up fast. Its statesmen concluded that the educated, and respected, wives “helped explain the staggering successes of American men in industry and commerce.”  Therefore, educating future mothers of enlightened sons should be as vital as learning industry, finance, and military.

Japanese tradition taught boys not to talk to girls—“the words of women should be totally disregarded.” In women, this tradition valued obedience and quietness. Women knew to stay out of sight (unless they were geishas). They knew how to use a dagger on themselves to defend their honor. `Their personal grooming had not changed for centuries.  In samurai families, girls were supposed to sleep in a specific position. And yawning in the presence of adults was prohibited.

These three remarkable girls fulfilled their promise. Each in her own way—“the grande dame; the working wife and mother; the unmarried educator”—they made a difference in their homeland’s education and cultural advancement. That they considered themselves American was an unintended consequence of their mission and another argument in the nature-or-nurture debate.

As the author says, “like all children, they absorbed the lessons of their surroundings. Though they were… purebred daughters of the samurai, they became hybrid by nurture. Ten years later, they returned to a homeland grown alien in their absence.” Theirs is essentially an immigrant’s story.

The Daughters of the Samurai takes us on an incredible journey through Japan’s little-known history of its painful transition to modernity. This history traces, if you read between the lines, to Japan’s choices in WWII, to hara-kiri, to kamikaze.