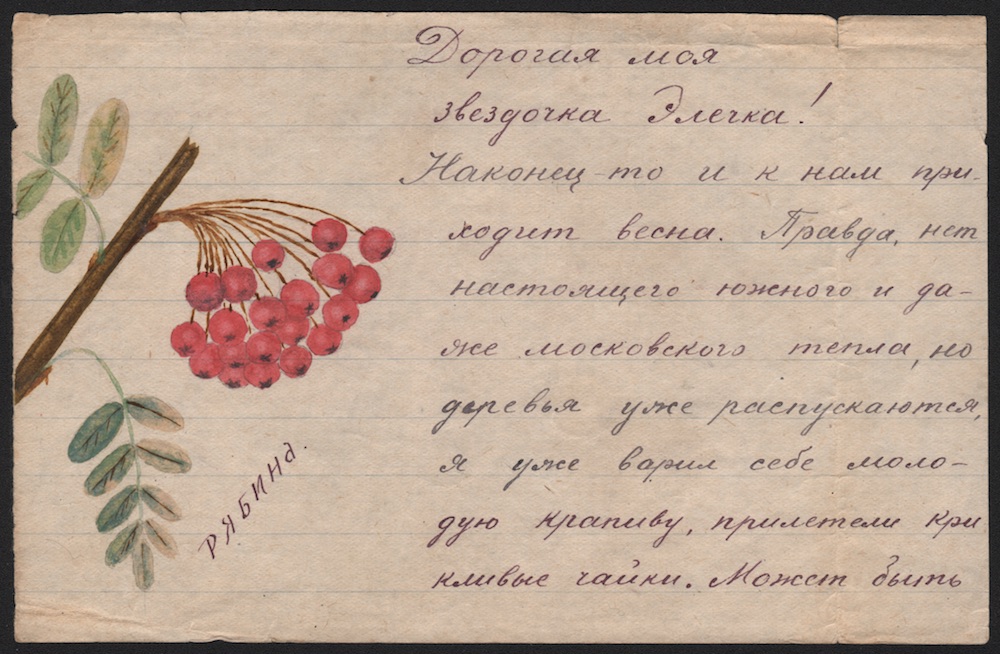 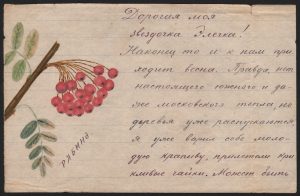 Fragment of a letter (picture handpainted) from Alexei Wangenheim incarcerated in a Gulag camp to his daughter Eleonora. “My dear little star, Elechka! Finally, spring is coming here too. We don’t really have the real southern or even Moscow sun, but the trees are coming alive. I already made myself soup from the stinging nettle. And the noisy gulls arrived.” Displayed in “The Dad’s Letters” exhibit. Photo from: https://tvrain.ru/articles. /letters-414721/

This is the name of a 2013 Moscow exhibition by the International Memorial Society. After a two-month run in the capital, it went on the road to big and small Russian towns. The organization known as The Memorial published a companion book also titled Dad’s Letters that has not yet been translated from Russian. 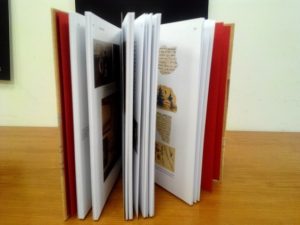 “The Dad’s Letters,” companion book to the same-name 2013 Moscow exhibit. Published by the International Memorial Society in 2014. Photo from: http://old.memo.ru/d/206172.html

Both are based on the letters from dads languishing in the Gulag camps to their children.

These are not simply letters but a legacy of men from whom the murderous Stalin’s meatgrinder took dignity and good names but who managed to twist away from it because they had their families. Through letters, drawings, fairy tales, postcards, handicraft they remained a loving presence in their homes and in their children’s lives.

Physically, most never came home—they faced execution or death in the camps, were not released after serving their sentences or received new ones. For two decades, it was too dangerous to mention them in public or on applications, but they lived on in the hearts of their children. The letters lived on. 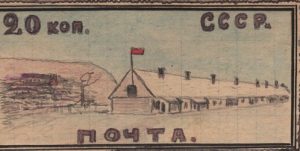 Handmade postal stamp by Vladimir Levitsky used on his letter sent from Gulag camp to his son in 1933. Displayed in “The Dad’s Letters” exhibit. Photo from: http://old.memo.ru/d/154748.html

The majority of political prisoners had no right to correspond with the outside world. Paper and pencils were difficult to come by, envelopes practically nonexistent. Stalin was not about to allow his political victims to share their thoughts—their ability to think had gotten them in trouble, in the first place. But these defenseless people made it their mission to give their children as much of themselves as they could.

One father commiserated with his four-year-old, “And why are your dolls sick all the time? Maybe you don’t take them outside enough. When I come home we will go outside a lot and they will get well.” Another advised his daughter, a medical student, against choosing a narrow specialty—it would be useless if she, like him, ended up in some godforsaken place.

Though the enforcement of the no-correspondence was uneven, access to mail was not a given under the best of circumstances. The incarcerated men folded their notes into the seams of their clothing, even into their buttons. They tossed them over the fence or out of a train when transported to another location.

Not surprisingly, missives vanished or got handed to the KGB but some—eternal gratitude to the unknown heroes!—did find their intended destinations. (In 2014 – 2015, The Memorial dedicated a separate exhibition The Right to Correspond to that aspect of Gulag life.)

All that most children have of their fathers are well-thumped fragments of their own letters to the camp discovered much later. But a few are lucky to own many letters and photographs so they can put a face, a handwriting to the word dad. 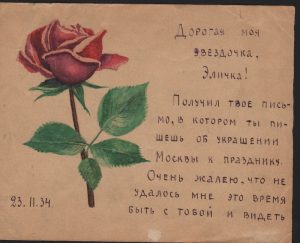 Fragment of a letter (picture handpainted) from Alexei Wangenheim incarcerated in a Gulag camp to his daughter Eleonora. “My dear little star, Elechka! I received your letter where you wrote about the decorations in Moscow for the upcoming holiday. I regret very much that I won’t be able to be with you and see… Nov. 23, 1934.” Displayed in “The Dad’s Letters” exhibit. Photo from: https://tvrain.ru/articles. /letters-414721/

Alexei Wangenheim’s large archive that his daughter turned over to The Memorial became the inspiration behind the Dad’s Letters, the exhibition and the book, and the book Recovering a name that contains his letters and his life story.

Wangenheim was the head of the Soviet metereological service and a diehard communist. In 1934, he was accused of espionage, sabotage, counter-revolutionary activities, and falsification of weather forecasts aiming to disrupt Soviet agriculture. His other crimes: a speech in French instead of Russian at an international conference and an article praising a foreign scientific theory without mentioning Soviet accomplishments.

Sentenced to ten years of hard labor then, three years later, to death. Executed and buried together with 1,100 prisoners. His wife and daughter did not know about his fate until his exoneration in 1956.

Ironically, Wagenheim never wavered in his belief in the Party’s infallibility. His arrest had to be a simple mistake. His petitions to the government professed his loyalty and innocence. While in camp, he not only wrote to his daughter but created a mosaic portrait of Stalin.

However, Stalin who had once held a job at a Meteorological Observatory was in no mood to extend professional courtesy. Nothing would divert him from destroying the country’s intellectuals. And nothing did!

We Had it Good

For my parents, Stalin’s tenure was the proverbial walk in the park. That is, compared to the Gulag millions and their shattered families. Yes, my parents were in fear every second, saw their coworkers and heard their neighbors taken away, lost friends to the Gulag, but no arrest awaited them, not a single interrogation. Losing a job as a cosmopolitan, being a homeless family for nearly a year, acquaintances crossing the street at the sight of you did not come close to a Siberian camp much less a bullet in the back.

What saved my parents? Avoidance of the Party, lack of ambition, caution in associations and conversations? My father lowered his eyes when meeting his lifelong friends again following Stalin’s death—since their disappearance 25 years earlier till the rest of his life he felt guilty for having dodged their fate. Their undying conviction that the Party had good reasons for everything made him cringe but what right did he have to argue.