Creating How Many Bushels Am I Worth? 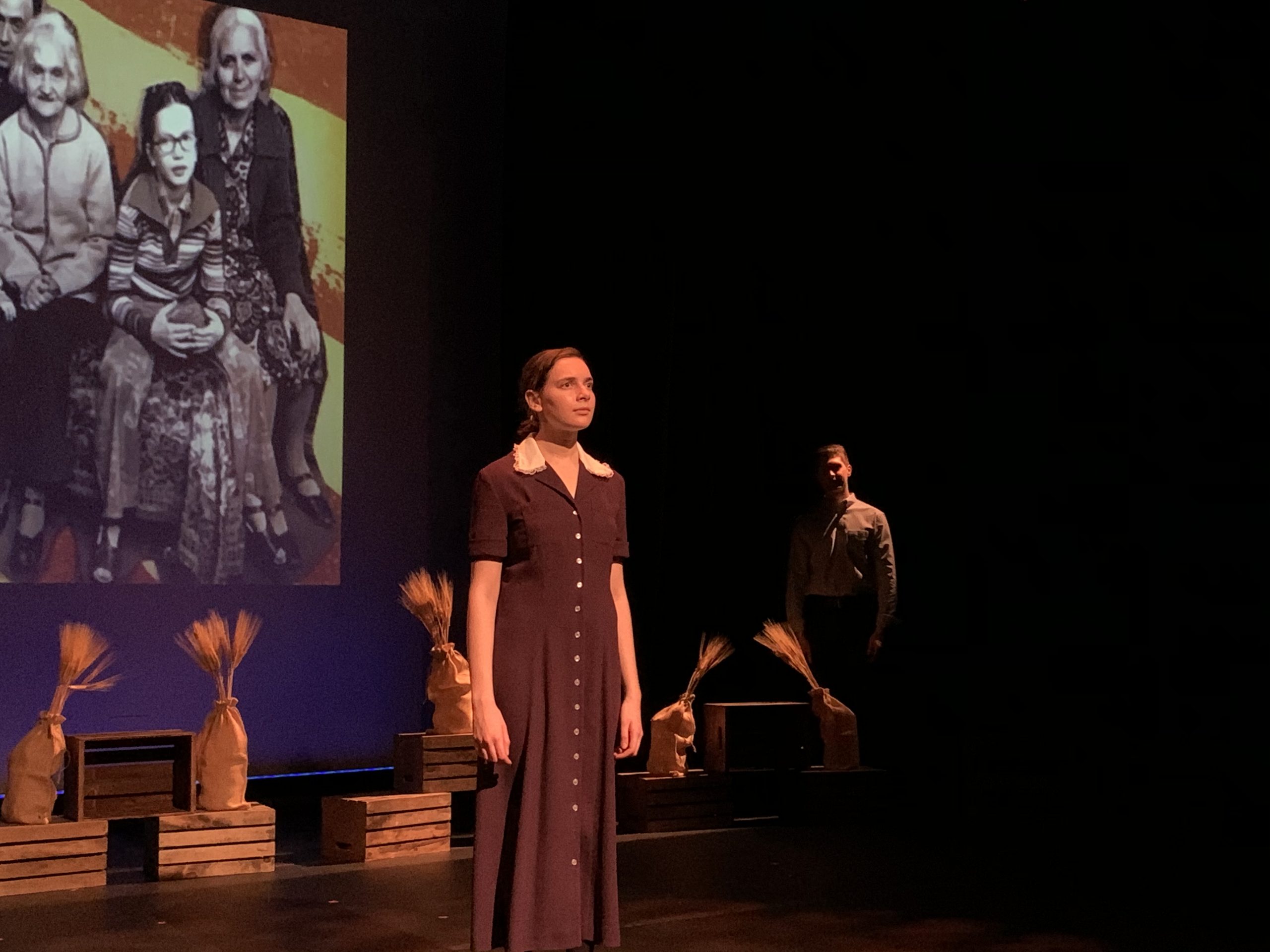 19 Jan Creating How Many Bushels Am I Worth? 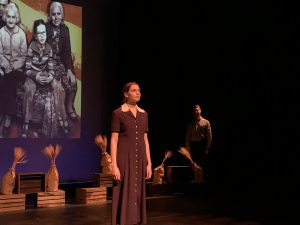 By Kevin Olson interspersed with reviews from our audiences

Most of the words spoken in the play I co-wrote with Bena Shklyanoy are quoted directly from the text found on her extraordinary family history website appledoesnot.fall.com. But not all of the words by any means.

The challenge of turning a text-heavy family history meant to be read into an engaging and hopefully compelling piece of theater is tremendous. Bena and I collaborated off and on for over 2 years working to create a script that we hoped an audience would find engrossing.

“New Yorkers, make sure you see this!”

She shared some of the jokes that are told in the play and we both came up with new lines that are sprinkled throughout. I contributed ideas on theatricality.  We both kept writing, editing, cutting, re-writing and re-editing until we found our play. After our run in Chicago in August 2018, we re-worked the play slightly by changing its structure a bit and by re-visiting an odd line or paragraph with the hope of improving it for our 2020 production in Providence and in Brooklyn

“ALL!!! Drop all your plans and make time for this amazing, one of a kind play! Young actors are amazing!”

But a story, even one as fascinating as Ms. Shklyanoy’s, is not a play until theater artists bring their talent and insights into a script by exploring ways to make that story theatrically viable and hopefully interesting. An audience is not going to endure the telling of an oral or family history unless the three-dimensionality of the live stage experience is compelling.

“You should place a box of tissues at the end of each row.“

In this production (now playing in Brooklyn’s Mark O’Donnell Theater next Thursday through Sunday) we found actors, designers, stage manager, crew folks and oh, yeah a director (me) who not only “got” this play but were significant contributors to its fleshing out by uncovering moments buried in the script that the playwrights did not know were there to be uncovered.

“energetic pacing and an ‘at home,’ conversational feel”

As the director of the play, one overriding concern I had was to find a way to give the audience’s ears a chance to rest every so often; this kind of text-heavy play can be tiring to listen to. So the transition moments between our scenes were crucial to accomplishing that goal.

I had an idea to show brief animations between scenes that portrayed a critical piece of the story from the scene that just ended. I hoped this technique would help the audience not only rest their ears but also help them recall the significance of a key moment from that previous scene.

“Magnificent. The acting, the directing, everything.”

Fortunately, we found stop-action animator Clara Tomaz who created the very short animations we are now using. Ms. Tomaz “got” the play and its flavor. Her artistic contributions in making this story come alive on stage are critical to its telling on stage.

“You wrote our story from A to Z. It brought tears to my eyes.”

For our 2020 production, my college chum and accomplished lighting designer Dave Feldman designed a plot that created clearly defined narrative spaces with subtle and at times not so subtle changes of color. He also suggested a couple of staging ideas that led to re-working for the better some of the production’s blocking and effectiveness, which in turn led to the discovery of new moments embedded in the text. I have always found that a good lighting designer is a director’s best friend.

Music can both enhance and get in the way of any production. It is always a tricky element to use. Our music coordinator, Michael Goldberg found just the right side of that tricky line pulling out short excerpts of music that so beautifully reinforced the emotional heart of each transition in and out of scenes.

And he put together a great pre-show playlist, most of which came from the extraordinary album Beregovski Suite by Alicia Svigals and Uli Geissendoerfer — used with their permission. Come early to listen to this great music! And he recorded accordionist Christina Crowder who played a couple of the short musical excerpts as well.

“An amazing production focusing on the hundreds of thousands of Jews living in the Soviet Union and their journey to America.”

A stage manager is not always considered an artistic contributor to a production. But our stage manager, Surrey Houlker, was. She always offered insightful observations on what we were doing in rehearsal and even created a few moments in the production. She helped puzzle through other moments with which the rest of us were struggling and always felt free to disagree with her director — very helpful. And she is now in charge of the show. Go Surrey!

Of course, in the end, the actors are the ones who carry the responsibility of voicing the script. Hannah Antman and Jake Malavsky bring to their performances such a commitment to telling this story that their enthusiasm is infectious. Each of them explored and initiated ways to play and interpret a scene as well as finding new beats and rhythms. Without their talent and their hard work to get off-book (memorizing their lines) early in the process, we would not have had the time needed to dive more deeply into the story and play around with the text.

And now I sit back and watch the play being performed in front of an audience — some large, some small —  as does Bena, and am in awe of how all of this happened and of the folks who helped create what I think is a wonderful theatrical experience.

Tix are available for performances on Thursday, Friday and Saturday nights January 23, 24, 25 at 7:30 pm and on Sunday, January 26 at 3 pm. Go to: appledoesnotfall.com/plays