Could You Make Love In the Street? 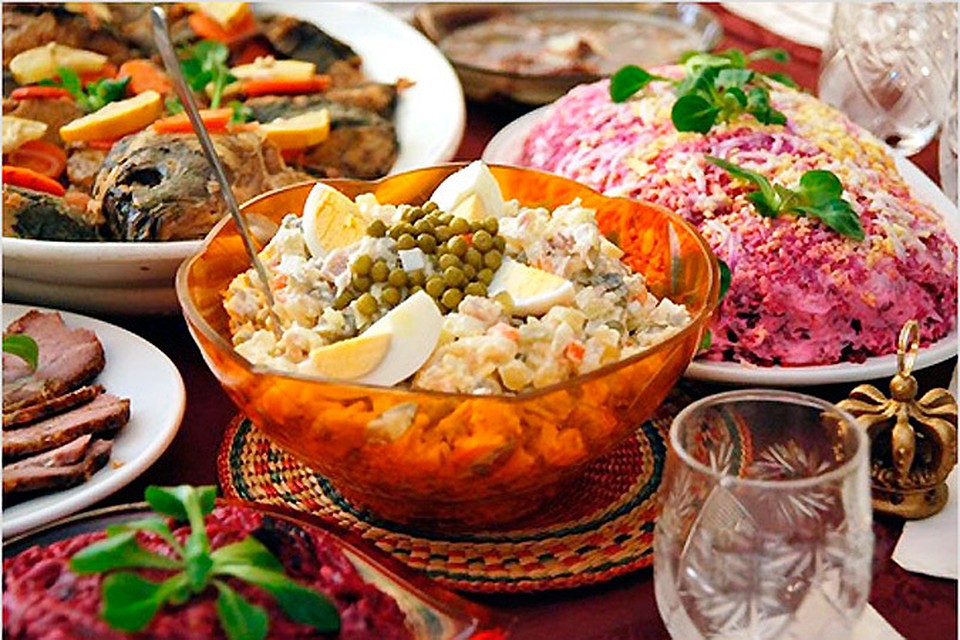 12 Oct Could You Make Love In the Street? 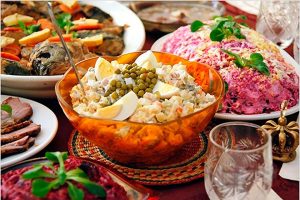 I came across a post (in Russian) recently that listed Soviet-born habits that not only survived immigration but proves the old adage that old habits don’t die. Old-country habits, in this case. Here are some of them, translated and personalized.

Bread remains a cultural symbol that it was in the land of famines and wars. There, it appeared solo or in concert with everything, including pasta, pierogis, and potatoes. Throwing out a crumb, literally, was a sin—I would know, I regularly got yelled at for committing it.

Government-subsidized carbohydrates kept our parents alive during many a hungry year. We, fortunate to live in absence of hunger, only in poor harvests and shortages, were warned that a bread-less meal (“naked” as my mother called it) was no meal at all. In student canteens, unlimited amount of free bread gobbled up with borscht ruled the day.

Even after many years in America, my husband sheepishly noshed on a piece of bread following a lavish meal and scrumptious dessert. “How could one not like bread?” Russians wonder. And just look at the princely assortment of breads at stores where the Russians shop. 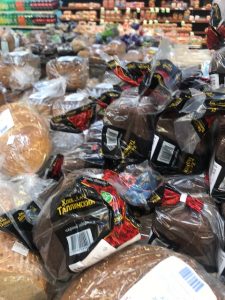 A portion of the bread section of FreshFarms

Dinner meant “the first” – soup with bread; “the second” – entrée with bread; “the third” – tea with sugar and a cookie or compote from prunes. Fruits and vegies were harder to place. The ordinary folk saw them briefly in the summer: cherries in June, eggplants in August and so on.

For one of our last parties in the old country, a neighbor who worked at a grocery store got a few tomatoes and pickles for us. My husband took personal charge of peeling the comma-shaped pickles as I was, he said, notoriously wasteful in that department. Awed by fresh vegetables in the winter, our guests took tiny portions of the salad; we gallantly took nothing. “Remember the season,” they cautioned each other as they passed around the dish. Consequently, half of the salad survived and we inhaled it after they left.

When international travel burst into Soviet reality the wide-eyed visitors witnessed the inconceivable phenomenon described (but not quite trusted) in our letters: year-round fresh produce. A joke reflected the discovery: “—When do the first strawberries appear? –At 6 in the morning.”

Well, many still adhere to the three-course-dinner law and complain if their children don’t.

I, for one, believe in the sanctity of soup as “the first,” minus the bread, and no one will convince me otherwise.

The adrenaline that fueled women in their months-long pre-holiday quests for the ingredients could have powered turbines. The peas and mayonnaise for the olivie was a project by itself, 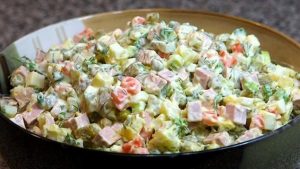 and I’m not even touching on liver or the seasonal luxuries like tomatoes or Bulgarian grapes. The guests’ amazement at the sight of that extravagance made it all worth it.

Russian family feasts still hold way too much food but mostly ordered from Russian delis. At the Russian restaurants, the variety of appetizers is staggering. And when you could not breathe any longer, an array of entrees arrives. Then desserts. Why? Because how will you know it’s a Russian restaurant.

One of the most common words in the Soviet vocabulary was gratitude. Since acquiring anything was a favor it was natural to show gratitude, whether quid pro quo, preventive, or proactive.

A tailor expected an illegal tip upfront. If not, he may or may not finish your coat in time for snow. Why risk it? A surgeon of your choice expected a nice illegal sum in advance. Handymen quoted gratitude in bottles of vodka, the most reliable currency.

Don’t you laugh at the lipstick example. There was nothing insignificant about lipstick, a bottle of perfume, a pair of shoes or underwear, a few nails to attach a book shelf.

In my short stint 40 years ago as an interpreter at the clinic for Russian immigrants, the most common question was: “How do I thank an American doctor? Will a bottle of cognac suffice? Chocolates for the nurse?” If in spite of my advice the patients delivered their gratitude, the recipients looked bewildered, to the bewilderment of the givers. Even I was offered a box of candy a few times. Just in case. To make sure the translation was up to par.

A joke said it best: “—Is it possible to make love in the street? –No, there would be too many advice-givers.”

A habit hardest to wean oneself off, even in a society of not universal camaraderie.