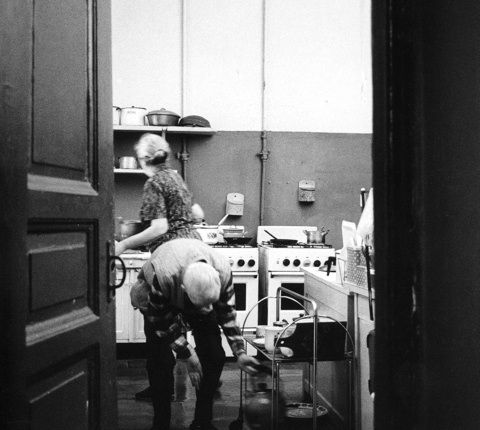 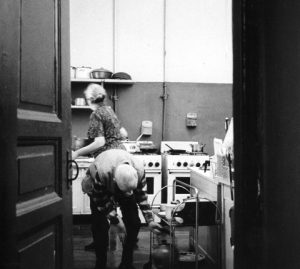 Residents in a communal kitchen. Photo courtesy of Communal Living in Russia: A Virtual Museum of Soviet Everyday Life http://kommunalka.colgate.edu

“If it was so bad, why didn’t you move out? Since you didn’t, it means you liked it.”

That was my American-bred daughter’s (and almost American-born) response to her father’s account of his life in a communal apartment. She was a teen then, so we didn’t expect miracles but still, we were dumbfounded. Didn’t she learn anything from our never-ending old-country stories?

Why didn’t he move out? Because that was the only way to live. My father-in-law got assigned his 160-square-foot room in a six-room apartment after he returned from the front in 1944. At least, it wasn’t a very crowded apartment—only sixteen people between the six families.

Luckily, the count did not really fluctuate over the years. One family lost the grandparents but acquired a son-in-law and a grandson. Another had an illegitimate child. And another lost a wife. My husband moved out when we were married but my mother-in-law let in a boarder.

My daughter’s reaction taught me a lesson, though: unless you come from the Soviet Union, or live where it used to be, you can’t be expected to comprehend the concept of a communal apartment, let alone take it for granted.

The Bolshevik Revolution came up with that phenomenon to accommodate the mass migration from villages to cities. What could be fairer than to commandeer the property of the exploiters of the working people and distribute it democratically, one room per family?

Universal equality and elimination of private ownership was achieved with one brilliant stroke. Why build new housing? And for fifty years they didn’t.

So, generations of families were preordained to marry, divorce, remarry, have children, entertain, fight, study, get drunk, get sick, die in the same room, sharing a bathroom, unless one was outdoors, and a kitchen with a multitude of families. The word moving did not enter the vocabulary. Moving where?

But it turned out that the old-country stories were not completely forgotten.

In her college dorm, my daughter had a brainstorm. “Now I know what a communal apartment is,” she announced. “It’s when you have your own room and in the evening go to a common room to watch TV.”

If you haven’t yet, open the link above and also view the Communal Apartment album to see for yourselves the nitty-gritty of Soviet urban housing the way it was until things began improving in the early 1960’s when Khrushshev visited the United States and got inspired by the idea of one-family-one-apartment.

And read more about it in the stories of my family’ life in the Soviet Union.