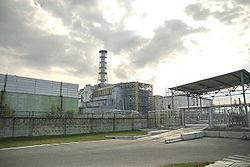 I’m sure you’ve heard of the Chernobyl disaster that occurred on April, 26, 1986 at the Chernobyl nuclear plant located about sixty miles from the city Kiev where I am from. But do you realize that that local tragedy was a factor in the fall of the mighty Soviet Union and in the resumption of emigration?

There doesn’t seem to be a connection. Why would a country that just embarked on the glasnost and perestroika reforms launched by President Gorbachev fall because of an accident, even a big one?

And why would anybody wish to emigrate from such a country? Especially knowing that, as punishment, they wouldn’t be allowed to set foot in it again? Like Gorbachev said on a press conference, everybody who wanted to leave had done so already before it was stopped cold-turkey in 1979.

Be it as it may, in the summer of 1987 emigration resumed with a vengeance and former emigrants of the 1970s, now newly minted American citizens, began visiting their families in the old country unimpeded.

But back to Chernobyl.

I learned of the explosion from a coworker. She told me not to worry: according to the late night news, the Soviet Union denied that it was the source of the increased radiation levels registered in Sweden.

My reaction “If they denied it then it’s true!” startled her. What would she think of my husband’s prediction that the enclosure of the shattered reactor would crack soon because some of the material would be stolen making the resulting mixture substandard?

If not for Sweden the world would be none the wiser about the Chernobyl explosion. As it was about similar accidents in the past. A 20-second news blurb (delivered after reports from farms) admitted that an accident did indeed take place and damaged one of the reactors. Two people died, many evacuated, fire extinguished, nothing serious.

An analysis of American nuclear mishaps followed the announcement—Western catastrophes were always more dire. Then classical music substituted the news.

The May First military parade (the last in USSR) 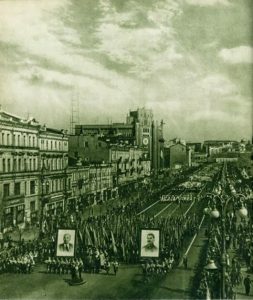 and the demonstration went as planned. 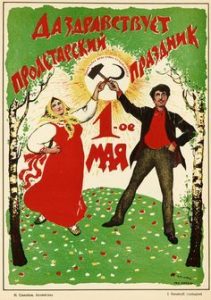 Soviet poster: Long Live the Proletarian Holiday of the First of May

Times were so liberal that I could call a friend in Kiev and not get him in trouble. He laughed off my anxiety: “The West panics for nothing. Just an accident, only a couple of people died.” Unbeknownst to the world, the satellite town that housed the staff of the plant had already been quietly evacuated. And so were the families of Kiev high-ranking officials.

For many months, letters from Kiev brought details of post-Chernobyl existence. Firsthand experiences circulated not only by word-of-mouth but some—what had the world come to?— by the media as well. Read also “Babinsky. Present (1978 – )“.

Volunteers without protective gear were sent to the site to assist local firemen. The first responders were dead within weeks. Doctors were directed to diagnose radiation sickness as panic disorder in order not to spread panic and to limit medical disability payments.

People were asked to keep the windows shut (no air-conditioning existed) and wash the floors frequently. Streets were constantly washed.

Groceries came to Kiev from other parts of the country until the local sources were deemed “clean.” Those who owned cars traveled far away to purchase fruits and vegetables grown in soil not affected by radiation.

In the summer, all the children under the age of 14 left Kiev to other towns to stay with relatives or in camps—Kiev became a city without children.

In the fall, more preventative measures were taken. The radioactive fallen leaves if left on the ground would, it was said, contaminate the ground and subsequently contaminate the water and animal feed. So, professionals spent their workdays in parks and streets collecting leaves with their bare hands. Trucks removed them to special landfills.

Quite a task in one of the greenest cities in Europe. School age children were not allowed to participate as no masks or gloves were available.

Chernobyl is known by this, Russian, name but in modern Ukraine its official name is Ukrainian: Chornobyl. Don’t be surprised at the different spelling when you travel to Kiev and decide to visit the Ukrainian National Chornobyl Museum.

And if you would like to see the place where the disaster occurred – beginning in 2011, the zone around the Chernobyl reactor was opened for tours (note that tour companies still use the Russian spelling).