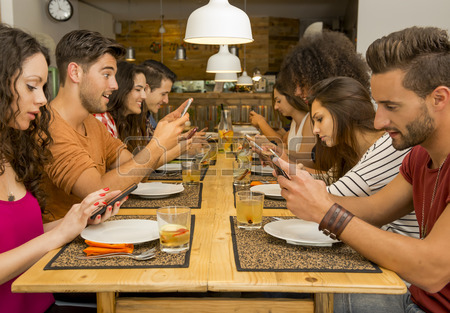 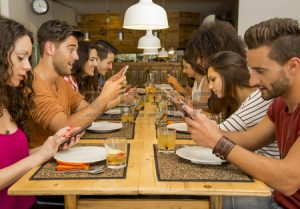 Italy: Some cities installed pillows on light poles to safeguard heads of people who look into their phones on the go.

A fuchsia fixture made of soft material hugs the post at the level of the head, shows a picture of a person walking with a telephone, and is called “paratesta”, which means, appropriately, “for the head”.  The bright color also helps people react quicker to an obstacle.

China: Local police fines pedestrians who cross the road while immersed in their mobile phones. 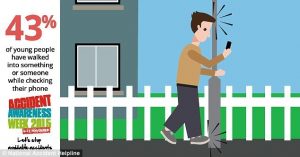 Belgium: In Antwerp, special lanes appeared on the streets, marked for exclusive use of walking readers and typists to prevent collusion with fellow pedestrians. 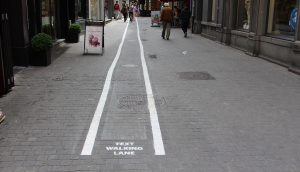 Or, rather, to prevent collusion with lamp posts and other inanimate and unyielding objects.

When not walking, cellphone addicts cause even more damage when they ignore each other at a family dinner, a date, at a get-together. 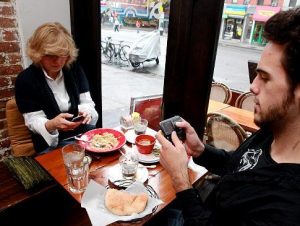 Do you know that there is a word to describe this phenomenon? The word is “phubbing”, derived from “snubbing.”

Remember the BCE (Before Computer Era) when phones were not simply landline but had cords attached to them and held you on a leash? 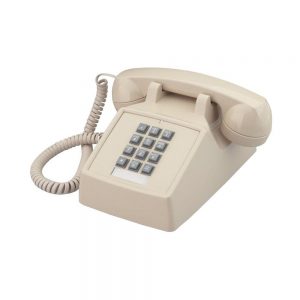 When my grandson saw a picture of it he didn’t understand what it was.

Another grandson asked how old I was when I got my first cell phone – he assumed that surely my parents had provided me with one sooner than his penny-pinching parents were going to provide him.

Remember when a family had a single phone number, even a single telephone set per family, and without call-waiting?

Remember the BCE when people kept in touch by writing letters, I mean handwriting, and carrying them to the post office? When tax returns were filled out by hand? Do you remember the sound computers made when they dialed up? By the way, that sound meant that the phone line was dead.

In BCE, newspapers came by snail mail and, as the name suggests, they were on paper. No one read them at the family dinner table. 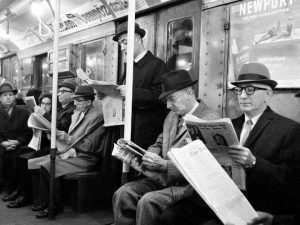 No one read them while talking to someone. Reading a newspaper was not an endless activity and it did not alert you in real time to the win, or loss, of your favorite team or to a sale at your favorite shoe store. Or to the divorce of a pop star or your friend’s recipe gone wrong, or right. Most importantly, whereas people talked to each other about what they read, each cellphone is a personal feed store.

There is no way back to BCE but there is a way to salvage one day of it. This big day is coming on March 1 – the annual National Day of Unplugging. 24 hours of global digital abstinence, from Friday sundown to Saturday sundown – an electronic Shabbat. It’s a respite from glowing screens and buttons to click.

Mark your calendar – I mean a paper calendar!

The National Day of Unplugging is the brainchild of the Reboot network based the 10 principles of their Sabbath Manifesto.

Unwind, relax, enjoy an uninterrupted meal or outing, read a book, I mean a paper book. And talk – in person, on a not-smart phone, on a landline – to people whose voices come through key strokes and feelings through emoticons the rest of the year. It does make a difference. And yes, you can order food or make a reservation by speaking to a live person.

Remember that BCE people were as smart as we are.  Maybe smarter because they were the ones who invented the nifty electronics we can’t live without.  Don’t fret: 24 hours won’t hold you back on high-tech progress, and you won’t skip a beat on the pulse of social media.

Use #NationalDayOfUnplugging to post on social media to spread the word and continue the momentum.

Get a cell phone sleeping bag – out of sight, out of mind. 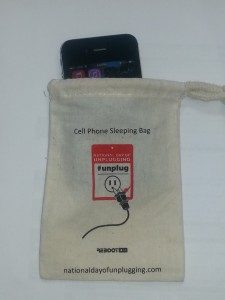