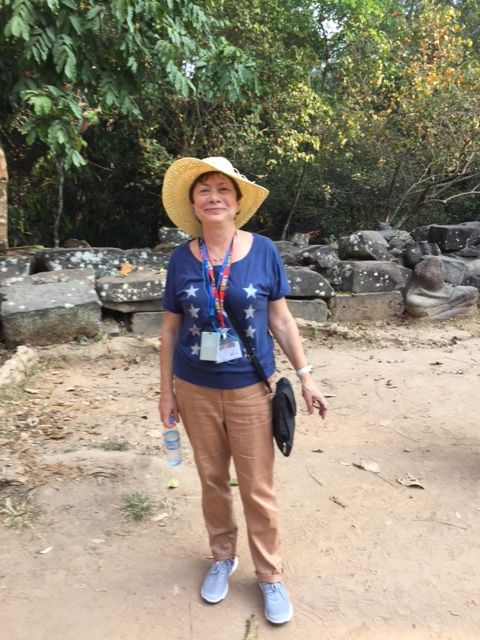 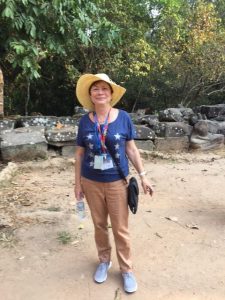 Cambodia: King and His People

“There is no freedom of expression but there is freedom of silence” — that’s about Cambodia’s political system. 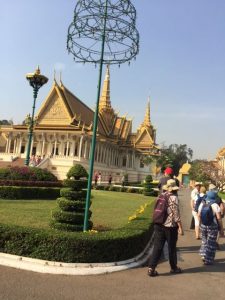 The country has a King who owns all the riches (we were mesmerized by the beauty of the Pagodas with their silver-tiled floors and emerald and diamond-incrusted Buddhas) and the government that steals whatever is left from the King. Everything bad is blamed on corruption.

Millions were killed in the 1970s. At the notorious Security Prison 21 there are walls upon walls of photos: little children, women, elderly. Names appear next to the faces. Cambodians come here to find their relatives. Entire families were wiped out. I’m not shocked – I’m a child of the Soviet system and Stalin’s gulags. 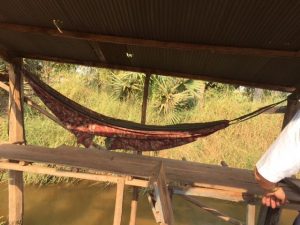 Families have many children. At least, the boys are sent to elementary schools. Young couples work in the neighboring Thailand, leaving the babies with their grandparents. In Thailand it’s easier to find jobs and get an education.

Our guide was lucky. His schooling was sponsored by an American couple from Tampa, Florida. Now, fully employed, he would be able to pay for his fourteen-year-old-daughter’s school. She wants to become a doctor and needs to learn French—the country used to be under French domination so all medical documents and drug descriptions are in that language. She also studies English because it’s accepted everywhere, and she needs Chinese because many investors are Chinese.

The cows, lazily eating garbage on the sides of the roads, look emaciated. Their meat is tough and they don’t give much milk; there are very few dairy products. Scraggy chickens have the longest legs and necks imaginable. Most eggs come from ducks. Those eggs are bigger and duck meat tastes better. We see numerous duck farms, fruit farms and lotus farms. Lotus is a magical plant. Break the stem and there is a silk thread inside which is used to make clothes. Lotus seeds are used for food. Its flowers are breathtaking. 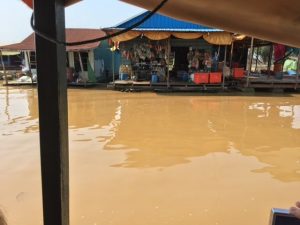 Three million people (about 20% of the population) live in floating communities. 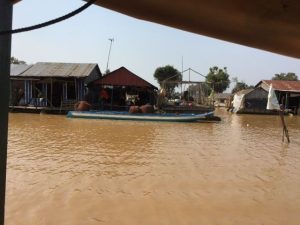 Their open shacks stand in the water on wooden boards. Small, shallow boats are the only transportation. We passed by a woman giving birth in such a boat.

Nevertheless, modern buildings are popping up everywhere. Investments roll in from many countries. Moneyed people see new opportunities. Corruption eventually is going to give way. The locals translate “leisure” time as “happiness” time. The bathroom as “happy” room.

The largest cities in Vietnam, Saigon and Hanoi, are bustling. Bright lights are cascading from every post and between them. 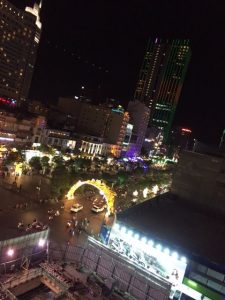 Like annoying bugs, motorbikes weave in between cars, busses, people. We were told: just walk, no one would stop, they’ll either go around you or not. There are entire families on small mopeds — children in front, between or behind their parents. Young couples are everywhere; they have dates sitting on their bikes. Helmets have become mandatory.

Young women cover their heads and faces in the streets. They cover their legs and arms, too. The explanation is simple: the lighter your skin the more beautiful you are. The shorter masks covering only your mouth and nose protect against pollution. Men wear those as well.

Vietnam: Looking Ahead and Back

Skyscrapers are in a competition with each other. Not only in the number of floors but in design as well. 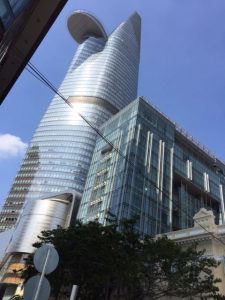 From one of those, standing at the forty-ninth floor, I marveled about the war and how hard Vietnamese fought not to become westernized and — and here they are.

The smallest red and brown stools on the sidewalks are for eating right there by the shops. Many people don’t use tables, just the stools and bowls and chopsticks. Passersby just step around them. Signs on barber shops advertise their services, including cleaning ears.

Every shop, restaurant, and even private residencies display altars in front of them. That’s where Vietnamese give respect to their ancestors. They leave bottled water, fruits, and candles there. Respect of forefathers is valued higher than their own lives. Tombs are built above ground in the middle of their rice patches, which are small to begin with.

Though the country got away from the socialist collective farming, the land still belongs to the government that rents it to the farmers. If the head of the renter’s family dies, the government has the right to give that patch to another family.

Single-family houses look like colorful columns. They are about three-stories high, very narrow and painted in bright colors (unless they are falling apart.) The reason for such architecture is the high cost of land. Private ownership of land is not permitted. People own rights with the State as the administrator. And who could understand that premise better than an ex-Soviet.

Shops selling souvenirs as well as interesting art and silk clothes follow us every step of the way. Or maybe they specifically target me, knowing my weakness for shopping. At the market, as we stopped to stare at an ancient man sitting at the entrance to his store, he pulled out his cell phone to snap a photo of us, gawking Americans.

On to my personal favorites: numerous Soviet-era signs. 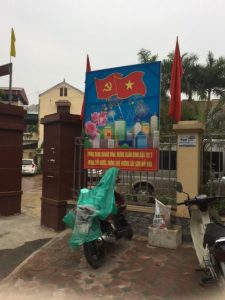 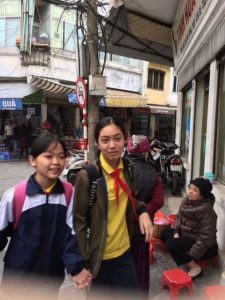 The huge loudspeakers high on the post were installed exclusively for brainwashing. 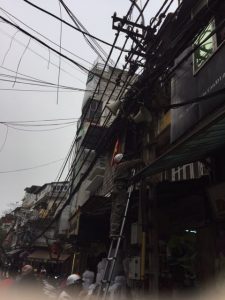 The Mausoleum that holds Ho-Chi-Minh’s body, that is every once in a while transported to Moscow for additional embalming. The Politburo building is located across from it. 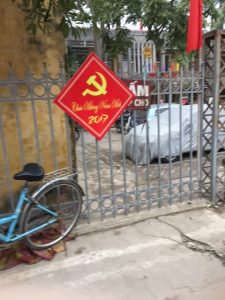 Now an interesting tidbit from much older Vietnam history. The King had many concubines. He didn’t remember their names or what they looked like. So, he’d order the artist to paint a portrait of each. Then when he was in the mood, he’d check those portraits and decide which particular girl he was in the mood for. So, the girls bribed the painter to make their likeness prettier. We called it the “original Photoshop.”

And the almost last observation — the most popular entertainment is “Karaoke.” There are entire rows of places with that sign. Could you imagine all of them working at the same moment!?

The last (absolutely last) fact about Vietnam:  Lawyers are poor. The reason — there is NO LAW in COMMUNISM.