“My Father’s Paradise: a Son’s Search for His Jewish Past in Kurdish Iraq” by Ariel Sabar 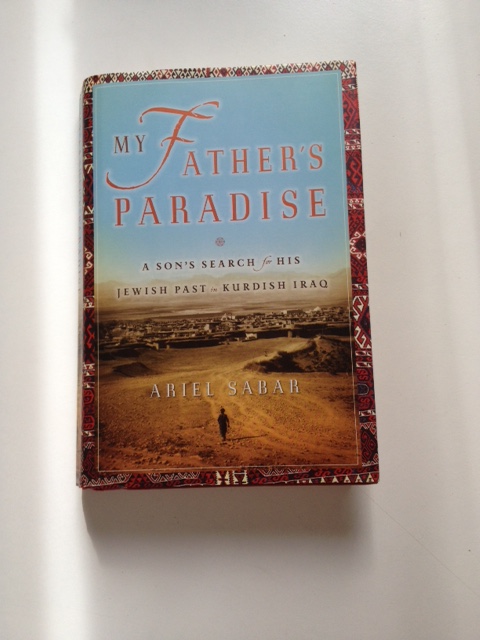 31 May “My Father’s Paradise: a Son’s Search for His Jewish Past in Kurdish Iraq” by Ariel Sabar 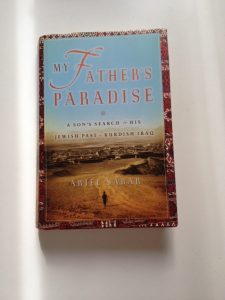 Do you know your parents?

I read this book a while ago but think about it often.

This is a story about Kurdish Jews, a small community hidden from view for almost three millennia. About the relationship between an immigrant-father and his American middle-class Californian son. About culture clash: Jewish vs Middle-East Muslim, Kurdish vs American, Kurdish Jews vs Israeli Jews, local vs immigrants. About the blood connection that trumps culture clash, generational divide, and shifting traditions. About appreciation of one’s heritage and yearning for continuity.

Many books, sites, and blogs focus on these themes, among them www.appledoesnotfall.com.

Ariel Sabar’s begins his story with the admission of the gulf between him and his father Yona. “Ours was a clash of civilizations, writ small. He was ancient Kurdistan.  I was 1980s L.A.”

Only when Ariel becomes a father does he realize that to ensure a connection with his son he had to build a bridge to his father. Considering that Yona “staked his life on the notion that the past mattered more than anything” and “believed that his past anchored him,” that bridge leads to the forgotten Jewish diaspora of Kurdistan.

This book offers an eye-opening account of the last generation of a community that, in spite of or rather due to their isolation, kept intact their three-millennia-old traditions and spoke Aramaic, the language of Talmud and Christ. The upheavals of the twentieth century, however, pushed them, reluctant and bewildered, into modernity.

The anti-Jewish hostility in the Middle East after World War II and the founding of the state of Israel forced the Jews from the region, among them the Kurdish Jews, to leave the place of their birth forever. To them, it remained a paradise.

In their traditional clothing and with their outdated (or maybe just forgotten?) customs, they found an unwelcoming reception in Israel that had embraced the European way of life. They felt closer to Kurds than to their Israeli coreligionists.

Yona arrived in Israel at thirteen, right after his bar mitzvah, the last performed in the old community. He left Israel to study at Yale then became a distinguished professor of linguistics at UCLA and a renowned expert on Aramaic.

Most importantly, Yona singlehandedly compiled a dictionary of Aramaic, thus saving the language for future researchers and historians. Even more importantly, his accomplishments did not change him: he remained as humble and as true to his roots as he was as a child.

The title My Father’s Paradise and the first-person narrative makes us expect a story of a son’s search for his roots but instead Ariel Sabar brings alive the father’s life story.

Anybody interested in a historical and personal perspective on the many nuances of the Middle East, on immigration, on culture clash, and on family bonds would appreciate this book, “My Father’s Paradise: a Son’s Search for His Jewish Past in Kurdish Iraq” by Ariel Sabar.