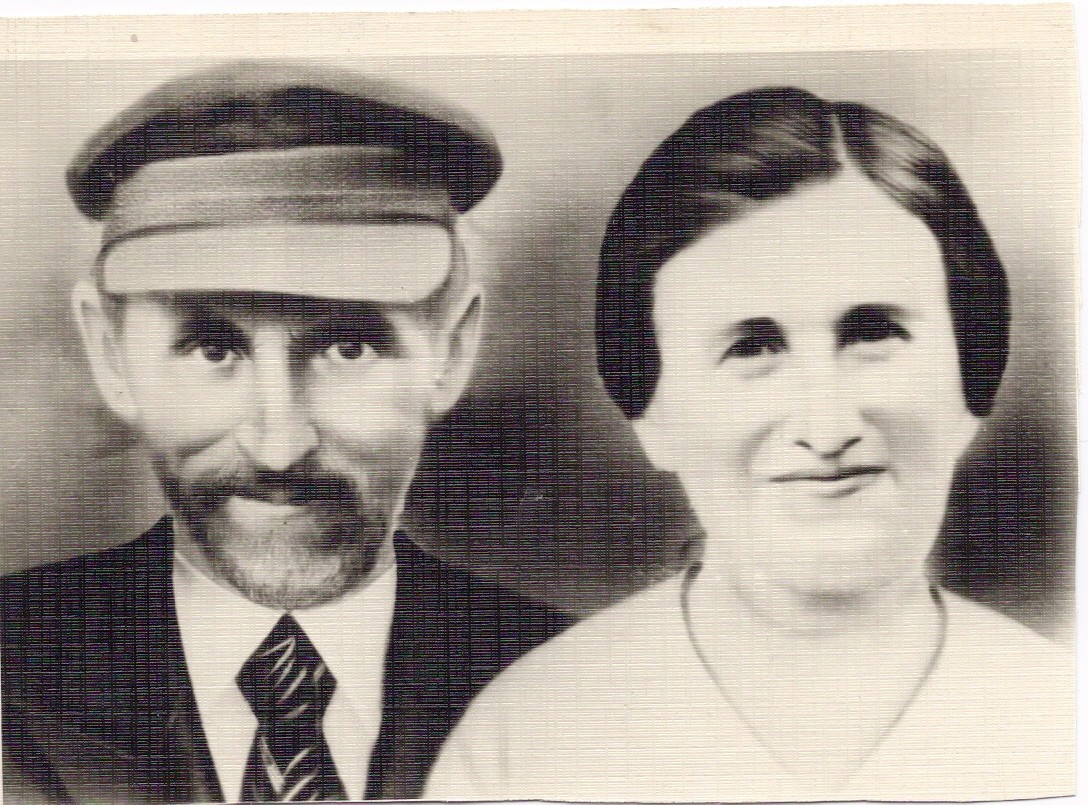 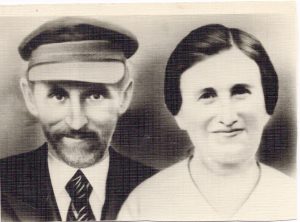 My paternal dédushka, Borukh Babinsky, and bábushka, Khaya Shlyapochnik, were born in Berdichev, a town in northern Ukraine. 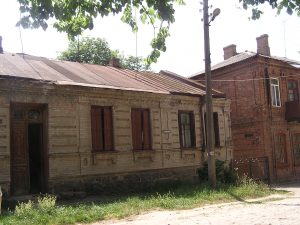 Berdichev. House in the area where the Babinsky family lived. Year 2007-2011.

Evidently, the onset of the Pale of Settlement had found the Babinskys’ ancestors (then known as Bobinsky) residing in the town of Kamenets-Litovsk and the Shlyapochniks’ in the town of Levkov, since that was where the nineteenth century censuses listed them.

So, Borukh, Khaya, and their siblings, who were at least the fourth generation Berdichevers, counted as residents of Kamenets-Litovsk and Levkov, respectively. Considering that their parents had not sought a shidduch for their children in their ancestral towns, the link to those towns must have grown weak by then – Borukh’s and Khaya’s children were not aware of the connection.

In 1874 or 1881, Borukh was born the third of four sons of Khaim and Perlya Babinsky. An established blacksmith, Khaim owned three two-room iron-roofed adjoining houses (what we would call one-bedroom townhouses), two brick and one wooden, a later addition that almost kissed the outhouse with one of its walls.

Even if they had a choice the Babinskys would have preferred to stay close – they drew strength, and warmth, from each other. The houses crowded a single lot on Brodskaya Street, 173—street named in honor of Lazar Brodsky, Jewish sugar mogul and philanthropist—where the four brothers lived with their parents and families.

(After Khaim was gone, each of his sons named one of his sons after him, a name eventually changed to a Russified Yefim (Fima.))

Whereas his brothers followed in their father’s footsteps, Borukh became a typesetter at a Jewish publisher located near his house. The proximity was vital for extending the life of his shoes, as snow and mud made streets impassable. Galoshes did not help, they got stuck in the street mush, pulling the shoes with them.

(The building of the publisher still stands (as of 2011) on Karl Liebknecht Street, one of Berdichev’s thoroughfares named, post-revolution, in memory of the co-founder of the German Communist Party. The 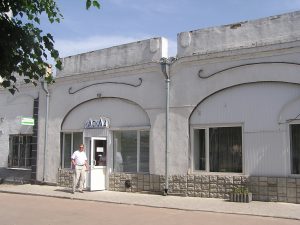 A man of few words, Borukh was so quiet that his presence often went unnoticed. His hands, disproportionately large and unexpectedly strong for his narrow build, were nimble and never idle; if not working they were rolling tobacco into his next papirosa.

Most evenings he immersed himself into copying Hebrew texts he could barely read from manuscripts borrowed at work onto pages he had fashioned, with ant-like patience and precision, from papirosa paper, then crafting binders from cardboard scraps to hold together the delicate diminutive books that the damp house soon turned into pulp.

Khaya (later Russified to Klara) came from a small-merchant family of Eli and Tsilya Shlyapochnik. Eli peddled fabric from a cart for years before renting a corner of a windowless storefront, one of many similar storefronts on a Berdichev market street. The family rented an apartment on Zhitomirskaya Street, 119; Eli’s siblings lived nearby.

The Shlyapochniks were known in Berdichev for their dogmatic observance of all their deceased relatives’ birth and death dates by visiting their graves. There was hardly a week without a trip to the cemetery. 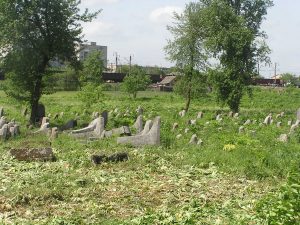 Berdichev. Remnants of the old Jewish cemetery destroyed during the Nazi occupation. Year 2007-2011.

(That tradition could not be maintained after they left the town and the graves behind but it continued on a limited scale in Kiev where they settled. Khaya insisted that one must remember every date if one expects one’s own grave to be visited.)

When Khaya’s younger brother turned ten, he took charge of the store after cheder thus freeing up his father for lugging bales of fabric to less poor customers.

Eli allowed Khaya to attend Judaism classes for girls that offered some basic secular subjects; she especially took to arithmetic. The opportunity presented to her stood out in her circle as forward-looking. When her schooling ended at the age of twelve, it would not occur to her, nor would she be permitted, to continue it.

According to the available records, Khaya had two siblings but Avram knew at least two more, one of them a sister who immigrated to the United States in 1908 with her four children and whose trace we could not find.

Khaya read and re-read her letters from Chicago out loud. They described many New World wonders, the most memorable being a stove that cooked so cleanly that a woman did not need to wear an apron. Khaya took her sister’s boasts with a grain of salt. The correspondence stopped in the early 1930s when USSR elevated any contact with people abroad to spying.

Borukh and Khaya – the Couple

If born in 1874, Borukh was eleven years older than Khaya, quite an aberration for a first-time marriage in the era of across-the-board teenage shidduchim. It is possible that a vague rumor was true that his previous marriage had ended with his wife’s death in childbirth. 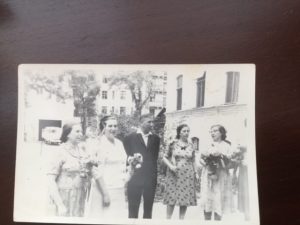 Borukh adored his daughters, proud to father four beauties that would not need dowries to entice a throng of shadchanim with the most tempting matches. “And after my last is taken,” he said, “people will tap on my window and ask if I have more.”

As fathers did in those days, Borukh commanded unconditional obedience. But it was Khaya, pragmatic and, as Avram put it, strategic, whose skill and judgment kept the family afloat, no small achievement on the budget comprised of Borukh’s measly wages and the coins her brothers-in-law could spare.

Tall and substantial, she walked lightly with her head held high. Able to pay attention to detail while keeping her eyes on the goal, Khaya ignored small annoyances. No amount of pressure could shake her even-tempered disposition.

My mother called her a commander-in-chief-and-peacemaker-in-one. Not fond of housework that dominated her life, Khaya stuck to the most economical and least-creative but filling diet: borscht, of course, and potatoes and cabbage separately, or combined in vareniki. The repetitive mundane tasks let her mind indulge in its favorite activity: making up and solving math problems.

Occasionally, she assisted at a nearby bakery when the owner’s wife was in labor or on predawn erev holidays, or on Fridays. She mocked the owner’s order: “Gish erein noch a bishl washer, das shein mehr a broyt (pour in a little more water, it will make more bread.)” His lisp produced sh instead of s; Avram imitated it masterfully and so often that I believed it to be a folk adage.

Khaya got paid with leftover bread, if there was any. When there was, she carried it home swathed in a spare shawl. Sliced, dried in the oven and eaten with hot water spruced up by a lump of sugar held between one’s lips, this treat was a noticeable, albeit sporadic, contribution to the family food regimen.

Many decades later, in the abundance of the United States, Avram still luxuriated in the taste of dried bread dunked into unsweetened tea, sipped through a sugar cube. Against the laws of chemistry, the cube lasted through an inordinate number of tea cups and left a morsel to savor after the last sip. “This is the true dessert,” Avram used to say.

World War I, revolution, pogroms, and civil war upended the family’s life, starting in 1914 and continuing through the early 1920s. Borukh could no longer work full-time: his chain-smoking and the lead and ink vapors caused chronic non-stop cough and stomach cramps.

While the world was falling apart around them, Borukh’s brothers managed to feed the entire extended family by shoeing horses and fixing carriages for anybody who would not kill them.

The area was occasionally conquered by the orderly and courteous Germans bringing the only respite from destructive invasions of the native armies and bands spawned in the upheaval.

For months at a time, the young Babinskys rarely saw the outside of the cellar. Teenagers were prime targets for murder or, with the same end result, for enforced enlistment, either punishment meted out swiftly by the victors of the moment.

Emaciated and terrified, all of Avram’s siblings and most of his Babinsky cousins dodged typhus and the endless robberies, extortion, and bloodcurdling pogroms, even those of 1919.

(Looking back, Avram had no other explanation of how they had made it out in one piece. He credited this outcome not to luck but to the Babinsky loyalty, the closing of the ranks in the face of danger. And to the quick thinking of his father and uncles who had shaved their faces in time to deprive the mobs of all persuasions of one unifying entertainment: tearing out, burning or shearing beards of Jews.)

A few years after stability returned, most of Avram’s generation of Babinskys scattered throughout the Soviet Union settling in Rostov, Kherson, Moscow, and Kiev.

During World War II, in 1941, the Nazis executed those of the family who had remained in Berdichev and were not in the army – children, pregnant women, old people, a total of seventy-two souls. 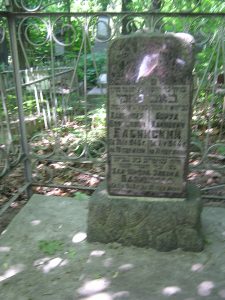 They were buried in the same grave in the Kiev Kurenevskoye cemetery.

Musya succumbed to tuberculosis at the age, Avram insisted, of twenty seven, even though the date on his tombstone says: “Died March 29, 1945, in his 20th year of life.”

Liza died in Kiev of pancreatic cancer in 1967. 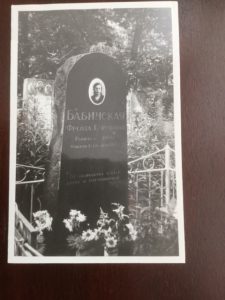 Avram and his three surviving sisters immigrated to the United States. All of them developed dementia at the end of their long lives. Avram also had advanced glaucoma. They are buried in the Chicago suburbs.

On the tombstones, the correct patronymic Borukhovich / Borukhovna appears but in life the children used its Russified form Borisovich / Borisovna.

The Babinsky descendants live in Russia, Israel, and the United States.

In 1961, my mother and I spent part of my summer break in Kherson, visiting one of my father’s first cousins called Yefim. I liked him. His genuine interest in my childish stories and his jokes at the expense of his short stature made me, a teenager, feel at ease. He was stout, with sparkling eyes, and so short that he needed a stool to be able to perform his ob-gyn surgeries.

Shortly after we arrived, the news came that we, the Soviet Union, had begun erecting a wall in East Berlin to stop them, the Westerners, from sneaking in to spy. My mother concluded that another war was in the offing.

To me, the word war sounded as remote as anything that had occurred before my birth, a topic for movies, a setting of detective stories. To the adults, the suffering and devastation of the war that had ended sixteen years before, kept its grip tangible enough for the knee-jerk confidence in the return of the bloodshed and of the Nazi’s Judenfrei appetites multiplied by the permanently throbbing local enthusiasm for the same goal.

The undercurrent of foreboding, a constant in our lives, would not have elicited alarm but the nervous whispers and the acute fright seeping from the adults’ grim faces were freezing my insides.

We wanted to return home to Kiev. Had the worst case scenario proven correct, a day on a train could trap us at some godforsaken station.

When Yefim learned of our decision, he didn’t let my mother finish the sentence, “You are not going anywhere alone with a young girl. We are family. Whatever comes we are in it together.” The rotund short man with an unflappable manner stood tall and powerful and suddenly I felt as protected behind his back as I had behind my father’s.