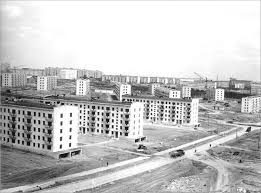 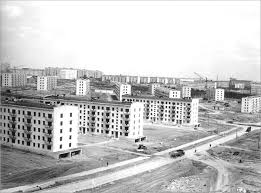 In the late-1950s, Avram’s and Rakhil’s friends began returning from exile. Known to me under nicknames to hide the connection, they now belonged to a category of The Repressed. They were mostly of retirement age but some needed jobs, or their children did. Avram unearthed a few suitable positions. Rakhil, not prone to yelp for joy, did that when she finagled a friend’s widow who had no skills into her department.

A few who had no relatives willing or able to provide temporary shelter slept on our two folding beds in Avram and Rakhil’s room and on the kitchen floor. The Repressed brought their savings from their jobs in Siberia where they worked after completing their sentences, and could afford meat and, in season, fruit in the market. Polina served extravagant amounts of mashed potatoes, buckwheat, kotlety, and stew.

The Repressed did not talk much. They disapproved of upsetting me. But stories of their lives gushed out of Rakhil, an eruption of pent-up fury and a lesson to me that went over my conceited barely-teen head: “When it happens again and your husband is executed, at least you won’t say there was a good reason for it.”

Avram’s versions of these stories were brief and succinct, merely footnotes. He hid behind the newspaper; he felt guilty for having dodged a similar fate.

The stories – dedication and sacrifice and gullibility punished with arrests, execution, shattered families, warped minds – dulled my senses with their sameness and immensity and senselessness. In real life, exoneration notwithstanding, the Gulag years would taint families’ biographies, so it behooved the exonerated to keep the details, or the fact of their incarceration, unshared.

Eventually, life settled into a routine dominated by weekend pursuits of food and everything else and defined by the triumphs or failures at the end of the queues.

In 1960, Rakhil quit her job temporarily when Polina had a heart attack. Relentless in her ambition to live in a better part of the city, she used her four-year employment break to swap our apartment. Twice.

(The phenomenon of swapping emerged with the advent of khrushchevka, the first post-revolution alternative to communal living. 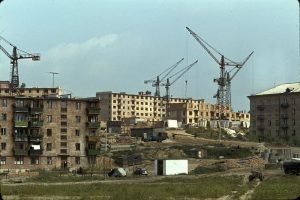 With the sanitary norm of 40 square feet per person reached, a family or part of it would join the city’s apartment waiting list. In addition, the list was prioritized by the degree of unbearable-ness.

It went without saying that those with square footage lower than the norm got their khrushchevka first, in only a few years. Breathing down their necks came families with a bathroom outside the building, especially far from the building; those residing in a dormitory room with another family; those with no kitchen.

For families that did not claim real hardship, the wait stretched into a decade or longer.

One could seek out a match by simply gluing a note to a tree: “swapping: a private three-room apartment in area A for a private one-room apartment in any district and two rooms or a two-room apartment preferably in district B.” The word “private” appeared in upper case or underlined, or both. One could also attend the weekly gathering in an out-of-sight corner of a centrally located park where swappers milled around in search of the right match.

Upon reaching the meeting of the minds, the parties petitioned the city for approval. The authorities ascertained that the arrangement did not smell of financial gain – if a family moved from a larger to a smaller place it better had a convincing explanation.)

Avram’s and Rakhil’s retirement in the mid-1960s changed the routine. Avram focused on food hunt, some days more successfully than others; he grated horseradish, chopped onions, ground meat for kotlety, cut newspapers into squares for the bathroom, picked out unshelled buckwheat kernels. (Sorting out buckwheat was a mindless and painstaking task. You needed to select all the black grains and all the tiny stones so that nothing crunched on the teeth afterwards. Avram traced his patience to his father Borukh’s assemblage of cigarette-paper books.)

Having a vigorous senior citizen in the family was a godsend.

With much trepidation, Avram started ordering matzos for Peisach. It was an elaborate annual project that began with establishing the correct Peisach date. Polina was reluctant, unjustifiably so, to rely on her calculations kept in the headrest of her sofa.

Avram made a trip to the vicinity of the synagogue to confirm the date. Entering the synagogue could have gotten me in trouble, so he wandered until he zeroed in on an elderly Jewish-looking man. Some candidates pretended not to hear or understand the question but eventually one would not mind a momentary inquiry.

A couple of months before Peisach, Avram went to the back door of the synagogue to find out when they would accept orders. Early that day he headed there to place his order and pay.

Curious, I asked to accompany him to pick up the matzos. Avram looked as horrified as if I had suggested committing suicide: “Promise that you will never come near the synagogue. Stay at least a block away or you will be photographed, you can lose your job, you’ll be thrown out of school.” He forgot that I did not know the specific location of the synagogue. 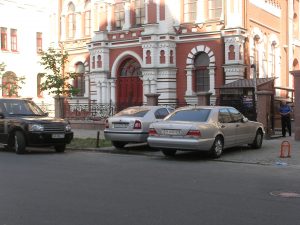 Kiev. Restored Podol synagogue (in Soviet times, the only synagogue in the city). Year 2011.

On the pickup day, Avram left the house at dawn carrying two suitcases with a pillowcase in each. He took a round-about way to the synagogue, and an even wilder round-about way back home with the matzos ensconced in the pillowcases. He realized the futility of the convoluted route if the Maliche resolved to lasso him in but to act not counting on a trap was against human nature.

The permission to make and distribute matzos each spring showcased the constitutional freedom of religion in action; in exchange, the benevolent master expected gratitude, submissiveness, and fear.

In the eventful fifteen years after Stalin’s dethronement, countless unmanned Soviet sputniks traveled into space followed by one with a dog Laika, then one carrying the first cosmonaut, Yuri Gagarin; newly-socialist Cuba sent its heartthrob leader to visit the Soviet Union; and Khrushchev fell in love with corn-farming and discovered non-communal apartments in the United States.

Construction of private apartments began. Age-based pension and five-day workweek were introduced. The ten-to-one devaluation of the ruble brought on food rationing.

Stalin’s body was evicted from the mausoleum and relegated to the Kremlin Wall Necropolis; his daughter got baptized. The Cuban crisis ended victoriously. East Germany erected a wall between West and East Berlin to ward off spies and former Nazis who lived exclusively in the West.

New non-working holidays were established: Victory Day on May 9 and International Women’s Day on March 8. Folksy to the end, Khrushchev banged his shoe on the podium at the United Nations. And he lost his job to a less lively Brezhnev.

Three vacations in a row Avram spent in Sochi, a resort city in Russia, on the Black Sea, where he was prescribed a series of hydrogen sulfide baths to treat poor blood circulation in his feet. Rakhil that had low tolerance for humidity, did not go with him. (His disease had a long name and was genetic; his doctor told me to watch for consistently cold feet because in a woman the condition could result in gangrene.)