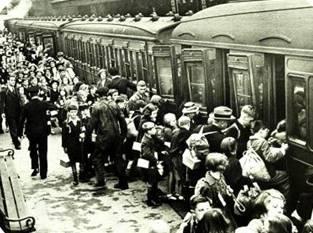 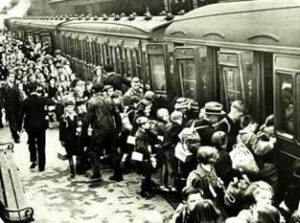 Evacuation of the civilians during the Great Patriotic War. 1941. Photo from: http://sensusware.ru/evakuatciya_IZ_O_.html

Next: Babinsky, Gnoyensky. 5: Family – Year One

The war separated Avram and Rakhil for three years. He managed the financial department of an MVD unit that operated behind the fighting troops. She evacuated to Siberia where, she reasoned, food would hold up well, a factor important because of her colitis. (Middle Asia – Tashkent, the capital of Uzbekistan in particular – with its hot climate was a more popular destination. That choice fed the legend that Jews sat out the war on the Tashkent front relaxing in the sun.)

Rakhil and Polina took what they could carry:

a few photos, the sewing machine, thread bobbins, a supply of elastic for their tricot,

and some clothing and fabric. Rakhil packed her personal documents (thanks to her employment record book, she was able, decades later, to corroborate her coworkers’ undocumented claims of employment when they needed to prove their pension eligibility.) They passed over half-dead towns; Rakhil wanted one that had a bank which meant the presence of meaningful industry and militia, the latter important as the evacuees sometimes faced hostility. She ended up in the city of Barnaul where she worked in a small food processing plant.

One spring her company gave away seeds, shovels, and small lots of frozen land to employees willing to grow potatoes to supplement their rations. Rakhil planted the potatoes according to the how-to booklet she had studied at the library. She then made a six-kilometer round trip every Sunday to weed it as the booklet instructed. An ultimate city-woman, she grew an unheard-of crop that wiped off the smirks of the locals that had expected the endeavor to fail. The yield was so bountiful that Polina had to barter some alcohol from the ration for additional burlap sacks. She had a field day inventing exotic potato dishes. Under her gingerly care, not one potato went bad.

In 1943, the Great Patriotic War was rolling westward clearing the occupied Soviet territories from the Nazis. The Red Army liberated Kiev on November 6, the eve of the twenty-sixth anniversary of the October Revolution – timing ordered personally by Stalin. The city was set ablaze and largely destroyed.

Head bookkeeper of the regional MVD, Avram was assigned a room in a communal apartment – ransacked but still containing some household items – and right away sent an invitation to his parents and siblings evacuated to Middle Asia. His father, my dédushka Borukh, gravely ill when he reached Kiev, soon passed away.

Without a family invitation the evacuees could not return to Kiev. Technically, a family had the right to claim the room it had occupied before the war. In reality, high-ranking officers and high-placed officials had simply appropriated them, thus displacing many families. Since real property belonged to the state, the law that mattered at the time was first-come-first-serve. The pre-war crowded and drab living conditions were now remembered nostalgically.

Rakhil had no hope of seeing Kiev again until she came across some documents at work that had originated in Kiev and were signed by Avram’s sister, Liza. Rakhil enclosed a note in the return package. Avram responded with a marriage proposal, his umpteenth. He filled out an invitation listing Rakhil as his fiancé and Polina as future mother-in-law. He applied for a larger room. But, he wrote, she was under no obligation; he would ensure she got her room back as the building where she had lived was not bombed.

Male population decimated and old-maid-age beginning at twenty, thirty-two-year-old Rakhil insisted she was not ready to marry. In Polina’s mind, her daughter was about to commit a zind that Velvel had warned against: to cause shmerz knowingly to a leitish man who loved her and was doing her a mitzvah. Such a zind would shoot zu kinder (affect the children,) that is, if Rakhil ever had any.

When the cattle train arrived in Kiev after a long ride from Siberia, Avram had much to impress his bashert: a chauffeured military vehicle carried them to the three connecting rooms totaling about 750 square feet in the center of the city – Chapayev Street 13, apartment 3 – assigned to him upon the announcement of his impending marriage.

The building was under MVD jurisdiction. Avram’s mother and siblings with their families had already lived there when he brought Rakhil and Polina. At the time when a family thanked fate for 60 square feet, three large rooms with only two neighbors sharing the kitchen spoke volumes of Avram’s position. One of the neighbors, a single woman, occupied a large room with a balcony; the other, in 80 square feet, was an older childless couple with a sister who slept in the foyer.

Next: Babinsky, Gnoyensky. 5: Family – Year One