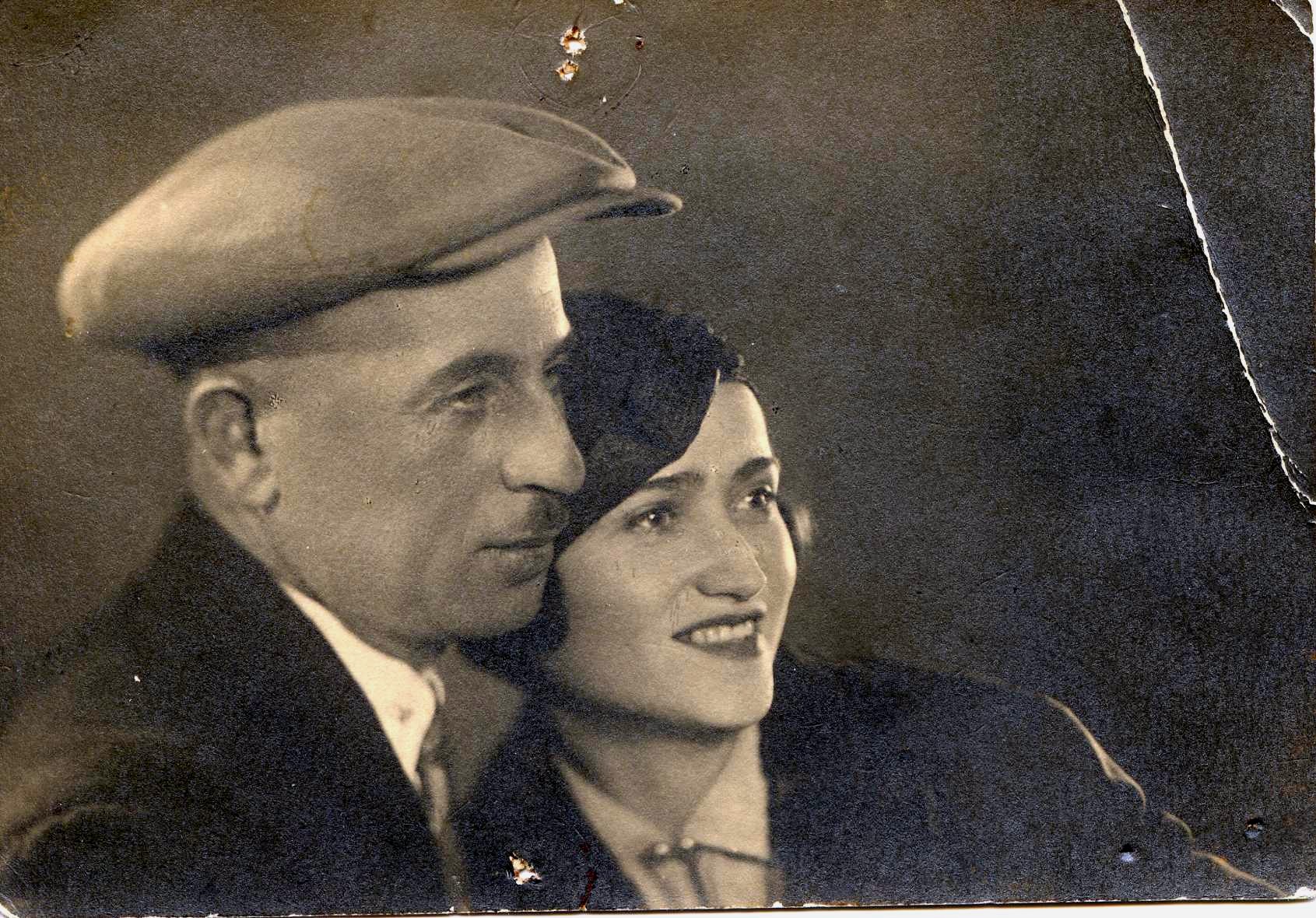 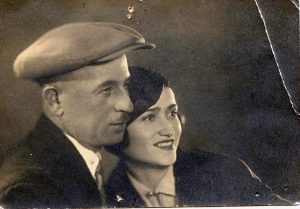 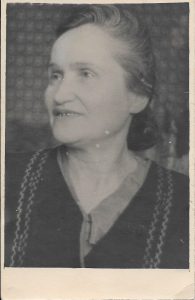 His mother, Shifra Zhivotovskaya (called Syuta at home) migrated to Kiev in the early 1920s from the shtetl of Stavishche located near the bigger town of Tarashcha and in the vicinity of Belaya Tserkov, my maternal family’s revered shtetl. Her father kept a tavern there before the Bolshevik Revolution. 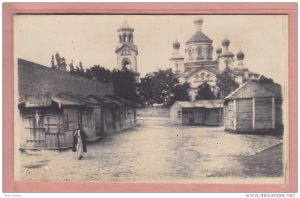 Tarashcha Market Place. The times of Pale of Settlement. Postcard.

The peasants who frequented his establishment often paid with chickens, eggs, milk, kerosene. His six children went to gymnasia. In the summer he hired a poor gymnasia boy to tutor them. Much like my great-uncle Leib, the boy worked for food and for a basket with provisions to take home.

In Kiev, Syuta studied chemistry at a technikum then worked at a pharmacy until she got married. 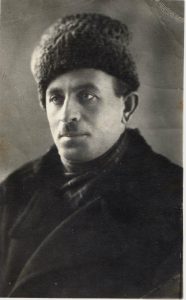 The oldest of eight, Dima’s father, Moisey Shklyanoy, finished cheder in his native shtetl of Rokitnoye then peddled household goods with his father.

Nearly 55 years after meeting Dima, while translating Jews of Bila Tserkva (mid-XIX – early XX centuries): Prosopographical Reference Guide compiled by Evgeny Chernetsky for the town’s Jewish Community, I discovered that Moisey’s ancestors were legal residents of Belaya Tserkov where, according to the Pale of Settlement rules, the Shklyanoy (spelled then as Shklyannoy) family had been originally assigned. 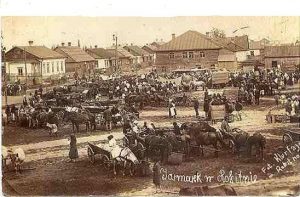 Rokitnoye Market Place. The times of the Pale of Settlement. Postcard.

They might have even lost the memory of their connection to Belaya Tserkov but were well off enough to be eligible to vote there. The same goes for Moisey’s maternal grandfather Volko Ochakovsky who had immigrated to the United States and lost  touch with the old country.

So, in my case, all roads lead to Belaya Tserkov.

Following the civil war and pogroms of the late 1910s, Moisey fled to Kiev. He held low-paying positions at the grain elevator but, due to shortages and black market, could provide for his wife and son.

Moisey, forty-four when the German army invaded the Soviet Union in 1941, Syuta and six-year-old Dima evacuated to Middle Asia. She arrived at the station straight from the hospital where she’d had a bowel obstruction fixed the day before.

Dima began to hang around with a gang of older boys who occupied themselves by throwing stones or animal dung onto healthy-looking young men they considered deserters or draft dodgers. They did not shrink from stealing food at the flea market, either.

Moisey was later drafted. He was wounded but recovered in time to return to Kiev following the city’s liberation and went back to his job at the grain elevator. The pre-war building where the family lived had been bombed out but, holding out a carrot in the form of flour, Moisey had no trouble getting a room assigned. It was narrow and dark, in a six-room apartment on the fourth floor of a centrally located building. 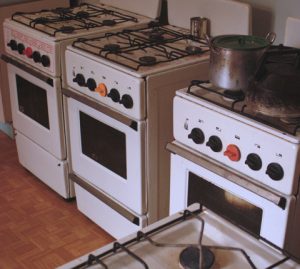 The window looked out on roofs and walls. The farthest from the kitchen, bathroom and lavatory, the room was split into a 130-square-foot main part and a 30-square-foot nook. Originally, when the entire apartment had belonged to one household, the room had been the second bathroom and the nook, a lavatory.

To a barely supervised ten-year-old, the slapdash post-war era was a boon. Dima had plenty of accomplices to help him swipe tools and guns at the flea market and to test unexploded ammunition. With stolen tickets or no tickets he sneaked into the circus and into the movie theaters running flicks looted from Germany.

He ran errands for the circus Gypsy performers and brought them home after the shows. At the sight of the Gypsies, stereotyped as unrepentant thieves and conmen, the neighbors, to Dima’s delight, pulled their laundry from the hallway clotheslines and scooted into their rooms. Syuta spread blankets on the floor for the uninvited men.

Dima assisted in the elopement of a fourteen-year-old girl with her Gypsy admirer. 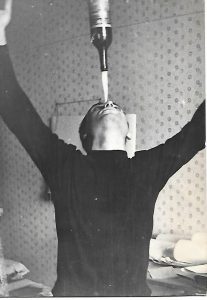 The Gypsies taught Dima magic tricks, knife-juggling, target-throwing knives into trees, and balancing a bottle of wine placed on a knife handle on his forehead. All his life he was nostalgic for those years but he realized it was a miracle he had not turned into a criminal.

Syuta sunk into depression and panic attacks, both inherited, she said, from her father and passed on to Dima. Eventually, she found work at a pharmacy as a gofer for forty rubles a month. She worked until sixty-five (ten years over the retirement age for women) to earn a pension of thirty-two rubles a month.

In the summer, Dima sent her off to rest-houses for back-to-back two-week stays. This gave him a place to entertain, an activity of which the neighbors disapproved.

Dima and I were engaged when he, sick with the flu, asked me to finish his drawing. Each of the five neighbors knocked on the door repeatedly to ask after his health and suggest remedies. While he was dozing I tiptoed to the lavatory. He stood at the door as I walked out. “What have you done?” he whispered dramatically. I committed the crime of turning on the light using the switch on the wall instead of one in Dima’s room. If caught by a neighbor, an ugly scene would be unavoidable. 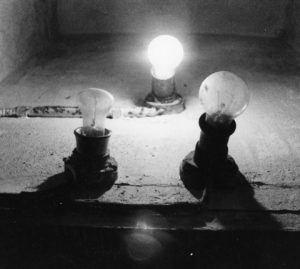 Light bulbs, one for each room, in the communal lavatory. Each bulb is connected to the meter in the respective room. Photo courtesy of Communal Living in Russia: A Virtual Museum of Soviet Everyday Life http://kommunalka.colgate.edu

When Dima married me, Syuta rented out the nook for a ruble a day to a teenage girl from the country. (The flow out of villages to the cities filled vacancies in heavy industry, construction, and sales. The new urbanites also had priority in admission to educational institutions.

Syuta’s boarder worked at a houseware’s store and occasionally set aside pots and dishes for Syuta and for the neighbors too, so that they would not make waves about the illegal rental scheme that resulted in an additional person using the facilities.

We contributed fifteen rubles a month to Syuta’s household. When the minimum pension rose to forty-five rubles in the early 1970s she did not need our help any longer.

Even though an only child of a single parent was not eligible for draft, Dima had to be evaluated by military medics. They diagnosed a heart valve defect and hypertension and marked him permanently unfit for service.

A blat got him enrolled into a mining technikum that he graduated from at nineteen with top honors and a demolition license. His mandatory two-year job assignment brought him to a gravel pit in a small town.

A mining technician, Dima prepared controlled explosions and oversaw dump truck loading and half a dozen laborers, all double his age, alcoholics with criminal records, and, some of them, former Nazi collaborators. A non-athletic Jewish boy who did not tolerate alcohol, he was at their mercy if they decided to jeopardize his monthly targets or to backstab him, figuratively or literally.

He asked them what he could do to make them happy. A loaded truck every week to sell the gravel or trade it for moonshine got him into their good graces.

Upon the completion of the assignment Dima received a formal release and returned to Kiev where he worked as a technical overseer and a foreman on construction sites.

Attempts to enroll into in the Kiev Construction Institute failed. He passed the tests into a six-year correspondence program in Moscow. By the time he graduated he was well-versed in every aspect of construction, from estimates to complex calculations and management.