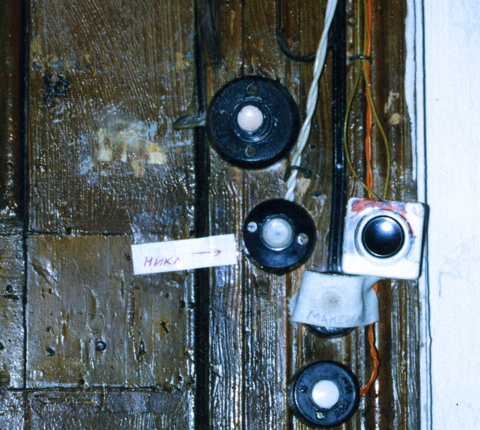 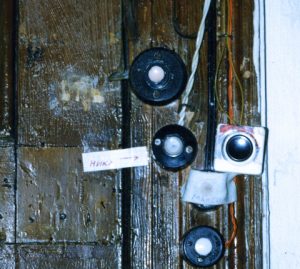 Doorbells on the front door to a communal apartment. Photo courtesy of Communal Living in Russia: A Virtual Museum of Soviet Everyday Life http://kommunalka.colgate.edu

I dated older, courteous, predictable men, mostly Jewish, sometimes not. Their eagerness to marry turned me off. Polina suspected that, like Rakhil, I did not want to be married at all.

In compliance with Velvel’s warning that causing shmerz knowingly constituted a grave zind, I nudged my admirers into initiating the breakup. Once my efforts did not work. The man kept calling from a phone booth by my house asking me to come downstairs. Polina suggested that I come downstairs in my slippers. In her experience, slippers, whether lapti or the modern kind, had a language of their own, she said.

Polina’s landsleit began, unsolicited, playing shadchanim when I was in high school. My tepid interest in matrimony brought about somber predictions of imminent spinsterhood.

The family did not exert any pressure: Polina frowned on early marriage as an obstacle to education; Rakhil subscribed to the view that marriage would not go out of fashion if delayed. But I was to meet or talk on the phone with every nominee, end of discussion. I was bound by Velvel’s law that the bride or the groom, nobody in their stead, could take the responsibility for the decision.

The one time Avram tried his hand at matchmaking had to do with the older son of his cheder-mate turned university math professor. Avram who seldom asked for favors, insisted that I joined him and Rakhil at the professor’s house.

The cheder-mate lived in a huge room with many communal neighbors, judging by the profusion of buzzers on the apartment door.

Books, some in English, overflowed the built-in cases and the desk. A folding screen with Oriental dragons walled off one of the three beds.

Both sons were out; the requisite son was probably not aware of my candidacy. The table was laden with breathtaking delicacies: smoked fish and meats, sharp-smelling cheese, an array of fresh vegetables, liver pate, large Bulgarian grapes.

The man’s wife noted that we should be grateful to Charles, a British mathematician, the cheder-mate had met at a symposium, for the over-the-top menu. Charles had invited himself over. The host panicked—all he needed was to be accused of fraternizing with Westerners—and made a beeline to his Party cell for absolution and advice on a corrective course of action. He swore that he had no intention to invite foreigners to his house; Charles had put him on the spot.

The Party graciously accepted his apologies and set up the date of the visit. The neighbors, miraculously, knew to schlep their trunks and coat racks into their rooms and disappear. As far as Charles was concerned, his host owned the entire place.

Somebody cleaned the staircase and spritzed an aromatic substance; painted the scratched mailboxes in the lobby; fixed the elevator and placed a repairman on duty. On the big day, two jeeps delivered food, alcohol, imported mineral water, and a decorative plate to cover the buzzers on the door.

As soon as the alien departed, the jeeps took away the plate and the leftovers. But the lady of the house diverted some morsels into her hatbox and a desk drawer emptied for that purpose.

Our hosts told us that Charles oohed over the spread but ate and drank little, much less than his hosts. The father and his wunderkind sons stuck to the subject of mathematics. The guest kept glancing questioningly at the beds but said nothing.

He inquired about the absence of parked cars in the street and asked how many cars the host’s family owned. The cheder-mate did not expect to ever own a car but even if he did, why would he want more than one? So, he went on the offensive. “How many cars do you own?” he asked. Charles had a ludicrous answer: in the absence of convenient public transportation to his house, he and his wife each had to have a car. Avram and his friend agreed that on the topic of cars, the Brits were bamboozling the Soviets.

Dating was almost exclusively done within a common social stratum. The society let men linger with impunity but compelled women to marry early. It harshly judged a girl still single at twenty-five for choosiness perceived as unmerited, or flaws perceived as ruinous, or behavior perceived as loose. In the summer, separate gaggles of girls and boys used beach time to view and appraise the opposite sex. Many a-successful marriage began with an aimless conversation while swimming near each other or in line to the fizzy water machines. 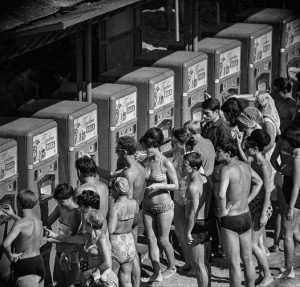 A bank of fizzy water machines in HydroPark, a beachfront Kiev park. A machine dispensed fizzy water into a single faceted glass that a customer rinsed by pressing it over a small water fountain next to dispenser. 1970s. (Photo by B.Gradov)

Until they married, girls were not to know where babies came from. Strict parents removed or blacked out lingerie pages from foreign catalogues sought and shared for their pictures. Colloquially, the word girl was synonymous with virgin. When somebody addressed me as “girl” and then noticed my wedding band, they would apologize and switch to “woman.”

A girl proved her respectability with modest clothes and manners, by not progressing beyond kisses, and by not admitting the need to pee, no matter how long the date.

The revolutionary doctrine taught that sexuality, though undeniable and, sadly, not outlawable, represented a harmful appetite utilized by capitalists to control the working people. Unlike capitalism, socialism strove to subordinate that pesky urge to the interests of the proletariat, to maneuver personal urges into compliance with the proletarian goals.

The Twelve sexual commandments of revolutionary proletariat listed abstinence, “there must be no jealousy,” “sexual intercourse must not repeat often,” “class, in the interests of revolutionary expediency, has a right to intervene with the sexual life of its members.”

The word sex, antonymous to the word love, was not uttered. Immersed in building communism, the country leaders could not be distracted by base urges, and the masses ought to follow their example. However, that conviction receded when Khrushchev appeared at events with his wife. That created ambivalence about the power of sex to distract from worthy ideas.

The 1975 edition of the complete Russian-English dictionary listed only one entry with the root “sex” – sexuality; the 2006 edition listed eighteen, including sex appeal and sex-bomb. The English-Russian dictionaries of 1972 and 2004 contained eleven entries each, with the earlier edition applying the translations to the animal kingdom, in general.

Physical-love content was one reason why censors screened foreign movies so carefully. Other reasons, no less important, stemmed from the irrefutable evidence of private apartments, variety of food and clothing, courteous service, extensive car ownership, and easy smiles.

The hard-and-fast rule of pre-wedding purity began to weaken but stayed largely in place. To be fair, it was an all-around pragmatic decision: everybody lived with their parents and grandparents and with neighbors watching each other’s morals; the husband had no grounds to suspect his bride in promiscuity; fear of pregnancy did not complicate life.

(The poor quality or, at times, a deficit of condoms left an underground abortion as the surest way of contraception. 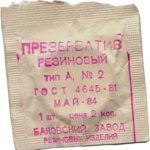 Condom. The text stamped: “condom made of rubber; produced in May 1984.” (Photo from www.savok.name).

Abortions were legal but it would be naïve to hope not to run into a neighbor at the district doctor’s office and get outed as unmarried but sexually active.)

Extra-marital affairs compensated for the restraints of maidenhood and bachelorhood. They blossomed into a commonplace trend, not condoned but not condemned outright other than by the cheated spouse or by a Party functionary if notified.

Many such liaisons morphed into enduring bonds, deep devotion, unfailing support systems. Divorce was an impractical way out of deception—the new couple had to share the apartment, or room, with the ex-spouse.

No matter the caliber of the relationship, finding a place to meet was challenging. Since hotels did not let in guests with same-city addresses in their passports, the partners were constantly on the alert for an apartment available for a couple hours.

The phrase in a wall newsletter of a women’s clinic “there is no place for extra-marital relationships in the Soviet Union” did not refer to a physical place but people who read it did. The American movie The Apartment struck a chord with Soviet audiences when it played in Kiev in the late 1960s.