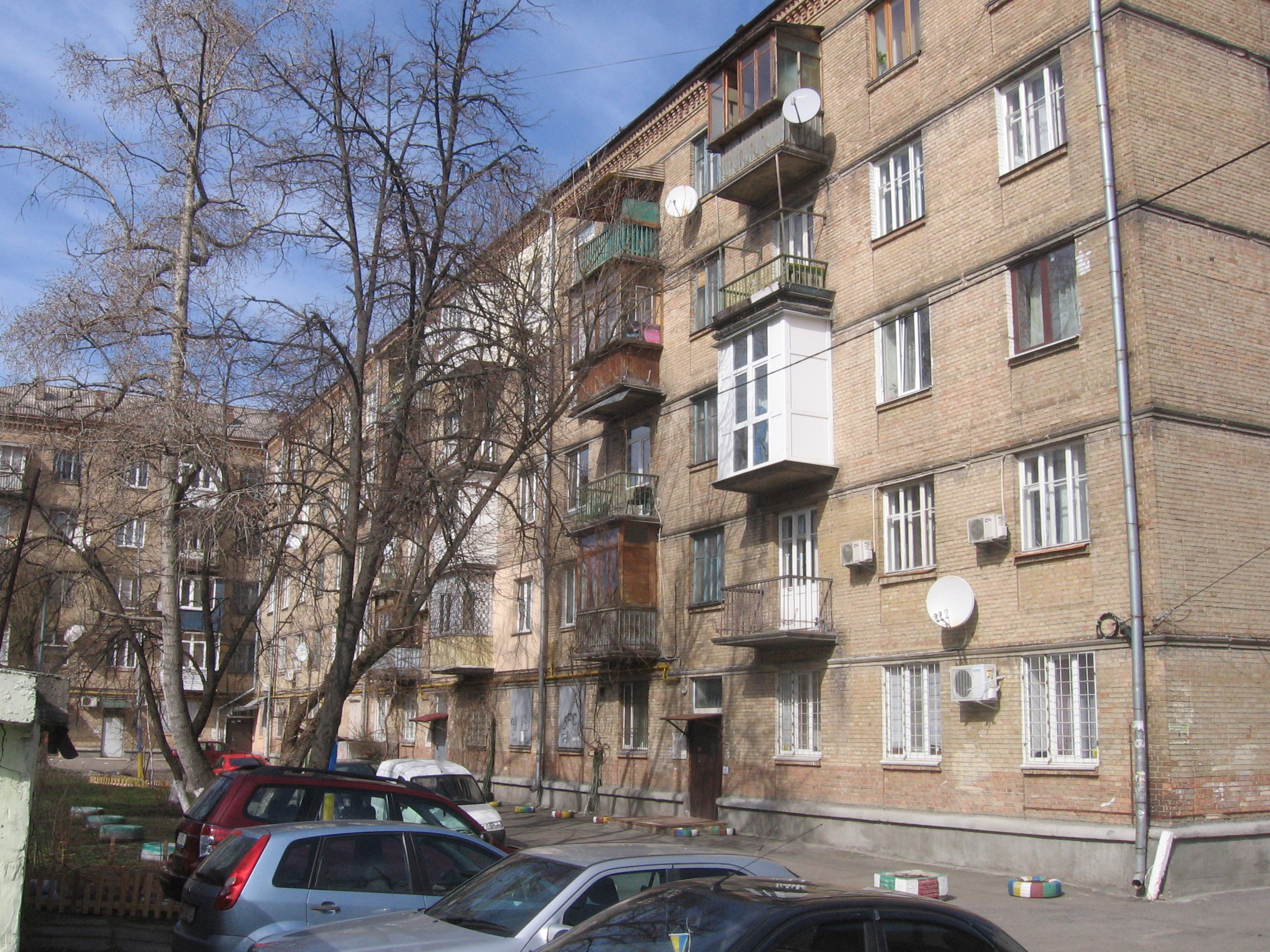 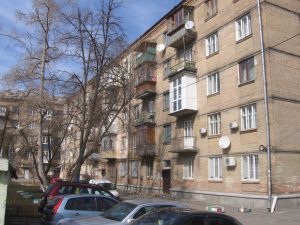 Sheltered from chores in favor of study, I barely registered our move to a new apartment in the spring of 1965. Rakhil-conceived and Rakhil-fueled swap that had taken years to coordinate took us out of Kurenevka and into the Pechersk district, the part of it informally referred to as the Black Hill.

We, again, had two adjoining rooms with a neighbor that had one but now we lived at a sought-after address: Bulvar Druzhby Narodov (Friendship of Peoples Blvd.), 14. The only music-records store in Kiev on the first floor of our building made it a landmark.

A major athletic organization had funded the construction of residences for national and international titleholders. The government compensated athletes handsomely. To authenticate their amateur status, they were listed on the payroll of various companies.

The athletes stood apart from us, apartment swappers. They wore imported clothes. They supported their families, immediate and extended. They walked confidently and did not drink. They owned cars.

Their box-like garages made of corrugated metal sat wall-to-wall behind the building—over a dozen of them, quite a number for a sixty-unit building. They made Soviet sport the envy of the world—it would be unconscionable to deny them permission to build garages next to their homes and make them park in assigned spots at an assigned facility an hour away.

A brick shed for trash disposal fronted the garages. 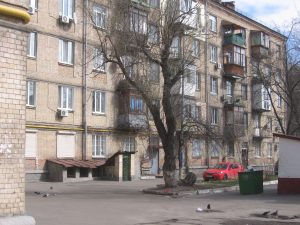 (Picture taken in March, 2016. The low structure on the right is the trash disposal shed.)

All day long, the janitor sorted the garbage brought in pails. She watched fragments of papers for duplicitous content, return addresses for ties with subversives or foreigners, and food leftovers for rarities consumed by families that could not afford them.

Our communal neighbor was a bulky, taciturn young man with a wife, an infant son, and a mother who slept on a cot in the apartment foyer. (See communal apartment for details of communal living.) Early in the morning he did a lot of snorting and spitting in the bathroom and the lavatory.

After the couple left for work, the mother, cursing like a sailor, carried the crying baby around the foyer. Ignoring everyone’s pleas, she kept the kitchen window open in any weather. In the winter she stood at the stove in valenki, a wool shawl, and a tattered jacket with clumps of cotton padding protruding out of the holes.

“Jews are weaklings!” she proclaimed when Polina got sick with pneumonia. In my first, and last, foray into the kitchen, I hissed, my nose an inch from hers, “If my bábushka gets sick again, I’ll kill you.” A wiry peasant woman, she could have knocked me down in a flash but, incredibly, she folded.

Having a phone previously gave us the right to the ahead-of-the-waiting-list service at the new place. That meant little until Avram brought in his friendly installer. He hooked us up to the intercom of the new hotel Druzhba (Friendship) across the street.

Two years later, when the next, final, swap landed us in a two-room private apartment in the same building, he transferred our phone for free. Of course, we shared the line with a neighbor, and the intercom connections crossed fairly regularly but only an ingrate would complain. One such errant call brought a man into my life that, it felt, had been in it since I knew myself.

Marriage was something that would happen following my graduation and hopefully travels. The mechanics of the decision remained nebulous. According to Polina, when I met a man who loved me like her tateh loved her mother and like dédushka Bena loved her and like my father loved my mother – I would know.

Did I know on that Sunday evening in February, 1967? He did know, he insisted, the instant he heard my voice. He proceeded to chat me up stubbornly. The crossed connection persisted in sending him to our phone line instead of that of his boss’ who lived in our building (she was the lady with two German Shepherds—to afford bones and meat for them was not for ordinary folk.)

I played the ace that had stopped many an unwanted date: “I’m tall.” “Good. So am I,” he replied. He wheedled the apartment number out of me and a day and time to come over but I thought it highly unlikely he intended to show up. The next morning, I regaled my coworkers with an unflattering rendition of the conversation and put it out of my mind.

He did show up. The neighbor opened the door; I had neglected to mention how many times to push the buzzer. In my house robe, braid down, I was in my room at my paw-legged desk neck-deep in English homework. The man was tall and balding, with a gray felt hat in one hand and a small bunch of wild flowers in the other. His gray eyes laughed as if holding in a joke.

I knew he was Jewish when he used a Yiddish word – Avram’s nose and Rakhil’s eyes told him we were Jewish. From his homey manner, everybody assumed that he was my old acquaintance. Four hours flew by. His mother told me later that he woke her up at midnight and said: “I met a girl today. I didn’t know girls like that still existed.”

Our date the next day began with a simultaneous “What’s your name?” His name Mitya was short for Dmitry. I preferred the other short form for that name, Dima. “It doesn’t matter. In my passport I’m Michail anyway,” he said.

Named Mordechai at birth, after his maternal grandfather Mordko and paternal grandmother Khaya but known to everybody as Mitya, he used Dmitry in all his documents, except the passport. In a country where Mark or David was too Jewish for comfort (and Sara or Aaron would be akin to felicide), Mordechai in his passport brazenly challenged the accepted sensibilities.

Before his university graduation, Dima had petitioned to change the offensive Mordechai to the all-purpose Dmitry. But the law demanded to keep the original initials. He chose the most common name, Michail; Mike in the United States. His last name was a perfectly respectable Shklyanoy, originating from shklo which meant glass in Ukrainian.

for Mr. Right remained short: good height, dark eyes, sense of humor, and nationality Jewish. The last prerequisite seemed inborn. Or perhaps it was an instinct of self-preservation.

The experiment of ransoming a Jewish background in return for acceptance failed bitterly, catastrophically. The same results from the same action over many centuries—why would next time be different? My schoolmate’s Ukrainian husband promptly filed for divorce after her nationality doomed his business trip to East Germany.

But what if my husband accepted the sacrifice? I would be loath to burden him with that lifelong litmus test—people could not know if they were mensch until they were tested. Nothing revealed feet of clay more unambiguously than marriage to a Jew.

Out of personal preference or commendable pragmatism, a child of that marriage had to conceal one side of its heritage—ein halber emes iz a gontze lyggen (half-truth is a whole lie.) For that, neither the child nor the parent needed to be an anti-Semite. The Russian son-in-law of Rakhil’s friend spanked his fifteen-year-old daughter for begging her Jewish mother to leave the house before her classmates arrived for her birthday party. In a different take, a Jewish acquaintance encouraged her son to marry a shiksa in order to cast off the troublesome bloodline for her descendants.

My child may or may not grow up a mensch but why give it an excuse not to? Especially that the camouflage would not safeguard it from the boot of the next Hitler or Stalin or a neighbor, for that matter—history had given no assurances in that department.

My great-grandfather Velvel’s commandment to judge one’s actions by their impact on one’s children – es shoot zu kinder (it will affect your children) – grew more and more compelling; it felt as if I had formulated it myself.