A Tale of Love and Darkness, by Amos Oz 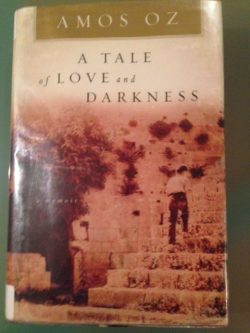 30 Jun A Tale of Love and Darkness, by Amos Oz

A Tale of Love and Darkness, by Amos Oz. Translated from Hebrew by Nicholas de Lange. Harcourt Inc. 2004.

The Pain of Growing

This book is a witness’ chronicle of the years before and after the creation of the State of Israel and of the moment of its creation. The moment that the Jewish people yearned, died, and fought for was two thousand years in coming. The witness is the author, Amos Oz, then a young boy. He was born in Palestine when “it was not only the world at large that was a long way away: even the Land of Israel was pretty far off.”

An heir to generations of illustrious intellectuals, he is surrounded by an extended family, an entire community, for that matter, of European refugees who had escaped by the skin of their teeth from the fascists or communists. His adult-grade wisdom helps him adapt to the only world he knows. It’s the world of Russian-educated dreamers, misfits and eccentrics, failed entrepreneurs, and rebellious women.

And Amos needs this wisdom to adapt to his own little family. His good-hearted parents are locked into a marriage doomed to end in tragedy.

His commonsense father lacks social skills; intellectual pursuits absorb him as well as the craving to prove himself worthy of his celebrated bloodline. His refined mother turns to dreams and fantasies because she longs to flee the darkness of her disappointing reality. (The boy comes alive in the movie adaptation in a role, played by Amir Tessler. The role requires few words, only sensitivity and intuition.) Amos’ mother commits suicide when he is twelve. Then, as a teenager, he breaks up with his father, moves to a kibbutz, and changes his name.

Put Your Foot Down Carefully

“If we picked up our foot, someone else might come along and snatch our little strip of land. On the other hand, once you have lifted your foot, do not be in a hurry to put it down again: who can tell what coil of vipers you might step on. …Time and time again we have fallen into the hands of our enemies because we put our feet down without looking where we were putting them.”

A Tale of Love and Darkness portrays the history behind Amos Oz’s childhood and youth with remarkable honesty and clarity.

The settlers face omnipresent mortal dangers in the years before the U.N. voted to create a Jewish state and the years that followed.  The author takes us on a journey through their everyday struggle, their politics and divisions, their poverty.

The anguish of that interminable waiting for the vote and of the certainty that the time is running out is palpable. The remnant of a hounded, persecuted, unwanted people overlooked by the Hitler’s and Stalin’s butchery holds its breath.

“…An otherworldly silence descended and froze the scene, a terrified, panic-stricken silence, a silence of hundreds of people holding their breath…” When the approval comes, the reader feels as one with that crowd that, unbeknownst to it, has already transformed into a “fighting nation.”

“…From now on, from the moment we have our own state, you will never be bullied just because you are a Jew… Never again. From tonight that’s finished here. Forever.”

The Arab neighbors launched the first war seven hours after the U.N. decision which was five months before May 14, 1948, the official birth of the state of Israel. “Shells fell on the Jewish areas at a rate of one every two minutes.” The war never really ends. The author observes that, over time, only the graffiti changed, from “Jews go home to Palestine” to “Jews get out of Palestine.”

A Tale of Love and Darkness is a memoir, a child’s-zoom-in on a birth of a nation, a family heritage account, and a history lesson. Do not miss.