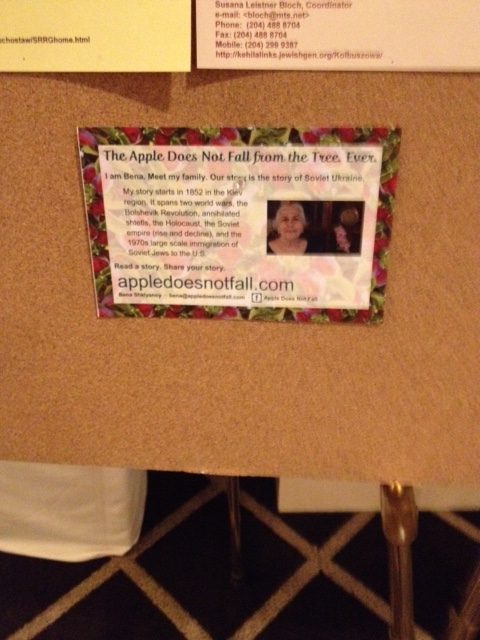 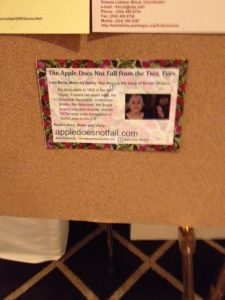 A cousin of mine, an attendee of several conferences, had described them “a zoo but exhilarating.” We had met online on the www.jewishgen.org genealogical site. She attended this year too which became the highlight of my trip—there is much to say about a common bloodline even if the exact relationship has not been determined yet.

I’d been to Seattle twice before and loved the city. Two fellow-genealogists and friends from a Yiddish language program at the Yiddish Book Center in Massachusetts came to the conference every day. One invited me for dinner at her house overlooking the Puget Sound. I did not want to leave! 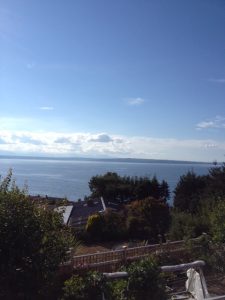 I prepared for the conference diligently: read every post; ordered the postcard promoting my family story www.AppleDoesNotFall.com; pored over the schedule to mark the not-to-miss programs; lost sleep planning my talk; and placed an umbrella in the suitcase weeks before departure.

In the end, the experience was less of a zoo than of a normal family reunion, inspiring and invigorating, and well-organized. All the faces seemed familiar. Conversations swirled around great-uncles, third great-grandmothers, Galicianers, Litvaks, and such. 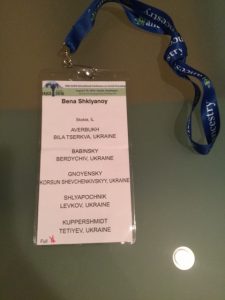 Bena Shklyanoy’s badge from the 2016 Genealogical Conference in Seattle, Aug. 7 – 12. The badge displays the name and the names of ancestral towns and surnames.

Our badges announced our ancestral towns and surnames – for all you knew, a cousin could be riding next to you on the elevator.

I came to the conference for the mayses. And I got them.

The keynote address by Dr. Devin Naar on Sephardic family history was outstanding. All of his lectures are; I listened to his series about Ladino at the Yiddish Book Center.

And of course, I wouldn’t miss any language research—to me, nothing is more exciting or illuminating than language. Dr. Jeffrey Paull and Dr. Jeffrey Malka talked about the origins and history of Jewish names in “The History, Adoption, and Regulation of Jewish Surnames in the Russian Empire” and “Jewish and Sephardic Surnames through the Millenia.” The latter traced the evolution of Hebrew names from the Biblical Era to the 19th century in the Sephardi society.

Sephardic surnames appeared as early as the 10th century. A couple of centuries later, rabbinical families in Central Europe took on surnames based on towns where they lived. According to rumor, not proof yet, my great-grandfather Auerbach came from such exalted roots—this surname is shared by a dozen German and Austrian towns and a rabbinical dynasty in the 15th century Germany.

Russia acquired its Jews at the end of the 18th century. When it finally made those without surnames adopt one it did it in such haphazard ways that related people ended up with different surnames and non-related people with the same surname.  A nightmare for genealogists.

For Night Owls Only

A night owl, I made myself appear at the 7:30 am talks almost every day but I especially enjoyed the late-night Sleepless in Seattle presentations. Mine was on Tuesday, Aug. 9, at 10 pm—I prayed that the attending night owls would not abandon their own. It was not ready in time to get onto the Syllabus each of us received so I will recap it in the next post.