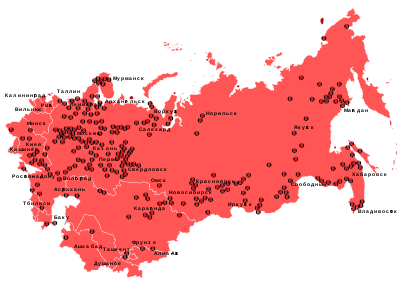 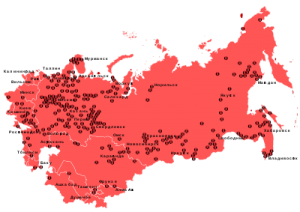 A map of the Gulag camps, which existed between 1923 and 1961, based on data from Memorial, a human rights group. Some of these camps operated only for a part of the Gulag’s existence. Photo from: https://en.wikipedia.org/wiki/Gulag

An acronym for the Soviet organization that administered the forced labor camps in the Stalin’s era: Glavnoye Upravlenie Ispravitelno-Trudovykh LAGerey (Main Administration of Correctional Labor Camps) from the 1930s until the 1950s.

Used by Solzhenitsyn in the title of his book The Gulag Archipelago in 1973, it has come to represent the entire Soviet forced labor penal system. It is also used to refer to camps operated in any country.

Hard labor camps in Russia were first created after the Bolshevik Revolution of 1917, but they expanded into a massive system during Stalin’s purges and industrialization and collectivization campaigns.

The largest camps were located in the Arctic, Siberia, and Central Asia. The extreme climate, hard labor, meager food rations combine to cause high death rates in the camps. By WWII, there were 53 labor camps and 423 labor colonies in the USSR. Post-war, POWs were exiled to camps as traitors. 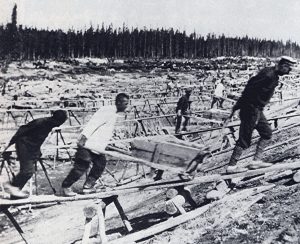 About fourteen million people populated the Gulag labor camps from 1929 to 1953. Six to seven million were exiled to remote areas; four to five million passed through labor colonies. Some estimates of the number of deaths in the camps reach ten million.

Major cities in the Arctic, such as Norilsk, Vorkuta, Magadan, were built and run by camp prisoners. Most Gulag inmates were sent there for petty crimes and jokes about the Soviet government and officials. About half of political prisoners were imprisoned without trial.

Following the Khrushchev’s denunciation of Stalin in 1956, the Gulag system was significantly reduced in size, but some camps and political prisoners existed in the Soviet Union until the 1980s.