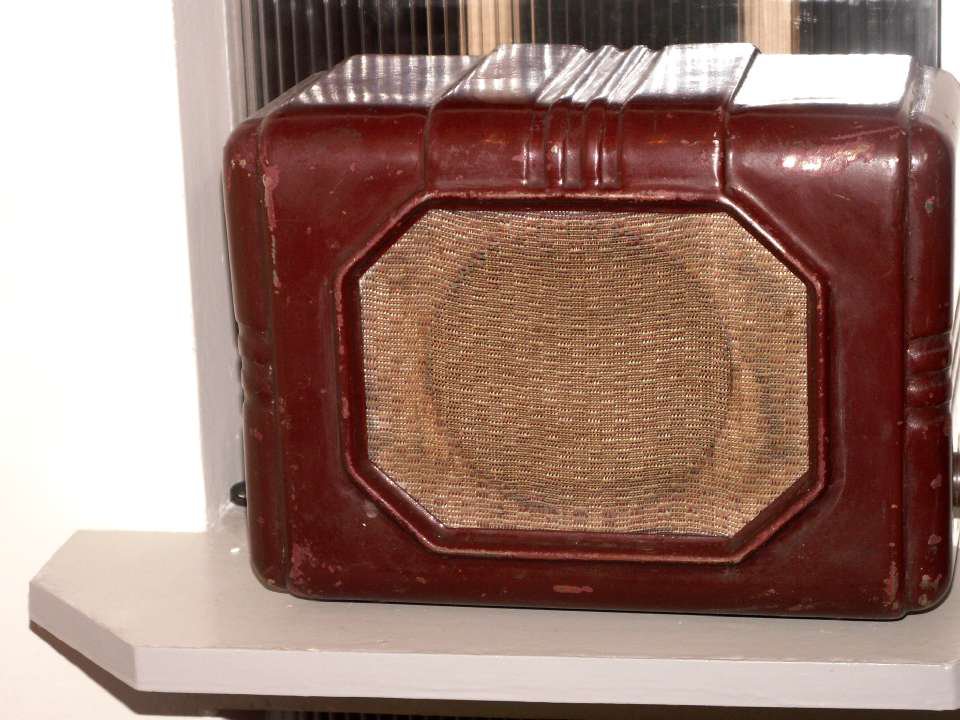 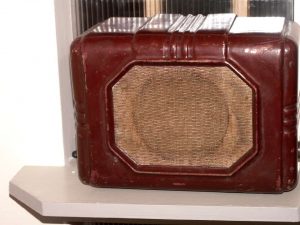 We returned from Crimea to the news of a just-adopted law “About the compensation of government education expenses by the USSR citizens that permanently relocate abroad” dubbed the “diploma tax.”

The amount depended on the degree and the school. Post-graduates were levied fifteen to seventeen thousand rubles; graduates of the Moscow University twelve; the rest between six and ten. Ten thousand was ten times my annual income, five times Dima’s.

Those in the midst of the process issued a battle cry for collections. Not one applicant had to give up due to the tax. Rakhil backpedaled the request to pass on our names. Twenty thousand rubles were as unattainable as a million. We were trapped.

The jammed radio stations kept us abreast of the United States response to the tax: a law proposed in the Congress would link trade benefits with emigration. The greatest nation in the world rolled into action on our behalf. We pinned our hopes on Senator Henry Jackson. But we knew that even he did not completely understand what he was dealing with.

The Party set up an Anti-Zionist Committee comprised of Jews holding high positions now charged with declaring, in media appearances, that anti-Semitism could not exist in the country of victorious socialism, by definition.

I was in a stupor, going through the motions of normalcy. Self-censorship was wearing thin. Rakhil and Avram took the multi-channel radio set and the television with them to their cooperative apartment.

I refused to own anything more sophisticated than a single-channel radio that told time, weather forecast, and basic news. Dima thought that was a bit much; he quipped, “If I didn’t know Rakhil I would worry about the state of your mind but I have nothing to worry about ‒ you are just like your mother.”

Exasperated by endless yapping about the blocked emigration I declined to attend most social gatherings; Dima attended alone, so as not to miss any news. I kept asking, “What’s going to happen to us?” He feigned lightheartedness, “Nothing will happen—that’s the scary part, isn’t it?” I became forgetful, focused inward; bags slipped out of my hands in the street without my realizing it.

Polina passed away in December of 1972 from renal failure. Rakhil locked the room in which she died so that I would remember her alive. As a female with both parents living I did not go to the funeral. I did not cry but three months later, on a bus, I dissolved, for no apparent reason, into a fit of uncontrollable weeping that lasted for over an hour. 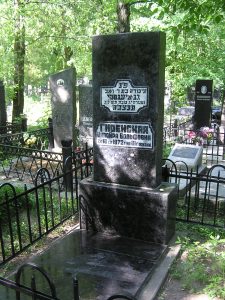 (The gravestone with Polina’s name that I saw three-and-half-years later, on my covert goodbye visit the day before we emigrated, did not convince me that she was gone – as she had said, the apple does not fall from the tree.)

Out with Diploma Tax. Out of a Job. Lenin in the Sky.

The Soviet government buckled under the threat of losing trade benefits with the United States and revoked the “diploma tax” in the spring of 1973. The Soviet Jews, the most worthless denizens, won.

Immediately, my coworker, the woman who had organized the rations with deficit, tendered her resignation “for the purpose of permanent relocation to the state of Israel,” the first in the company.

The head honcho took her decision as a personal betrayal—that was how she had rewarded his lenience! To add insult to injury, she was his wife’s friend. At the company meeting she was raked over the coals. But the company’s trade union chairman knocked on her door late at night, flowers and cake in hand, to apologize for what he said at the meeting and to express his admiration.

That day, five-year-old Emily’s face showed signs of recent tears when I picked her up from daycare. Her group-mate had appropriated her doll but said she didn’t. The teacher said not to worry: Lenin sat in the sky and saw everything and meted out punishment justly.

If I told Emily that the sky was devoid of Lenin she would share my opinion with the teacher, a blue-eyed thirty-year-old beauty with a Master’s degree in education. I had no choice but to become the teacher’s accomplice. “Yes, we are getting out,” Dima reacted to the story. He reinstated our request to Rakhil to pass on our names.

Within days of my coworker’s resignation, the company fired eleven employees, ten of them Jewish, on grounds of redundancy. I was one of them. The eleventh, a girl just hired to operate the blueprint machine, demonstrated the non-anti-Semitic nature of the layoff.

My manager told me, “You should emigrate. A capitalist would value you higher.” (A short time before, his five-year-old son had boasted of beating up a boy for being Jewish. His son was inconsolable when he learned that so was he.)

We survived on Dima’s salary and on the tests he did for engineering students.

In the fall, Emily began suffering from stomach discomfort and nausea. She spent six weeks in the hospital undergoing tests. For ten rubles the head nurse transferred her from the second floor to the first floor. It was on the ground level, so that we could see each other and, if the fortochka was open, hear each other.

I sent in food that Emily did not eat and that was not given back to me. (Compensated at below subsistence level, the nurses and orderlies raided the nightstands at shift-end.)

Emily was diagnosed with the narrowing of the urethra and a urine reflux into the kidneys. When discharged, she was dehydrated, bluish-skinned, thin as a twig, and had to be supported when she walked. Every few weeks her temperature spiked to the limit of the thermometer scale. Blankets and pillows did not help, only my body on top of the pile calmed her chills. Dima hovered by watching that I did not suffocate her.

Antibiotics were nowhere to be found outside the black market and some not there, either. They didn’t help but we had to try. Many evenings Dima lurked at the gates of the penicillin factory, holding his nose against the foul smell, waiting for the end of the second shift. He approached a worker who appeared reliable to ask for the antibiotic we needed. The man smuggled it out for a few rubles.

Dima followed that strategy with lemons that helped suppress Emily’s nausea. He haunted the lobbies of restaurants (there weren’t that many) until a friendly waitress slipped him a small wrinkled lemon, that is if the eatery had them. Each cost hours of effort and two or three rubles.

Emily’s urologist, Dr. Gennady Yesakiya, took her case for his dissertation. In his mid-thirties, he lived with his great-aunt in her one-room apartment. He could not wait to defend his Ph.D. and scram to his beloved Georgia to start a family. Georia would expunge him, in his words, if he married a non-Georgian.

A descendant of a physician-rich clan (his great-uncle had performed the mastitis surgery on Rakhil when I was a month old,) he hated the Maliche with a ferocity that surpassed Rakhil’s. His employment record contained reprimands for telling his Party-active colleagues, “Stop writing speeches! Treat children!”

Gennady’s parents showered him with raisins, prunes, and dried peaches and figs; he lugged the cloth-padded parcels from the post office to our house on the trolley. In the markets, his entrepreneurial compatriots in flat round caps dubbed “airdrome” sold such delicacies at exorbitant prices.

Dr. Yesakiya explained that the narrowing of the urethra was hereditary and inherited from the mother’s side. People usually lived till old age not aware they had that condition. Children with symptoms either outgrew them before the age of ten (but not always before the reflux caused kidney failure) or underwent a life-saving surgery that left them incontinent.

Boys could not avoid surgery. For girls, another option existed – bougienage. Bougie, a metal cylinder that came in different diameters, was inserted into the urethra for a few seconds to widen it. 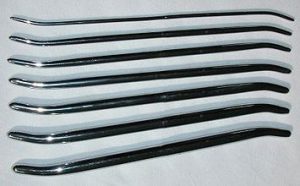 The widening did not necessarily stop the reflux, but Gennady was adamant: “Anything but surgery. Trust me. I create invalids every day. When I’m done with the dissertation I’ll switch to adult urology.”

The twice-a-week procedure was uncomfortable but painless. Despite how thoroughly he disinfected the bougies, infections occurred. Emily trusted only Dr. Yesakiya. He did not take vacations for the two-and-a-half years he treated her. Emily was not getting better.

We were waiting for the invitation from Israel.