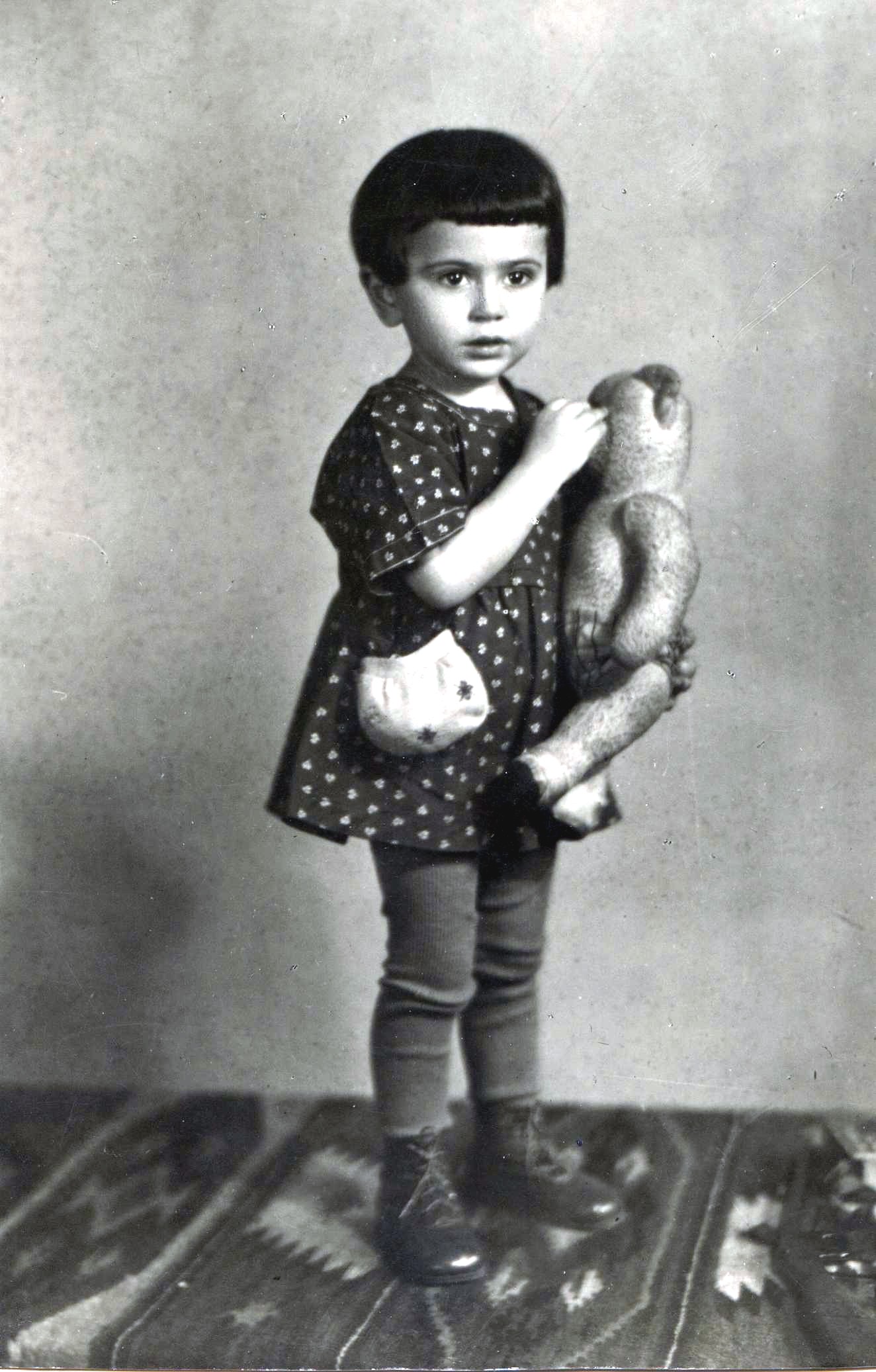 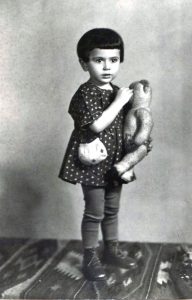 Lusya, the neighbor’s daughter, was almost two years older. We played in her living room—furnished, in my eyes, like a castle—or in the apartment foyer. She owned a rosy-cheeked celluloid doll dressed from hat to underwear. Her father had brought it from Germany where he ended the war and from where, Lusya bragged, he hauled their chandelier and other beautiful things.

On my second birthday, I got a cloth doll with a ceramic head. But dolls did not interest me, I played house with Lusya as payback for leafing through Krokodil (Crocodile), the satirical magazine her family subscribed to.

My reckless choice of Churchill over Stalin in a Krokodil caricature ended my friendship with Lusya in the beginning of 1948. (Read the full story in Babinsky, Gnoyensky (1904 – 2004). 6: Rootless Cosmopolitan; Homeless.)

I could not tell Lusya that playing with her would cause my father’s arrest. To tempt me back she spread her Krokodil on the foyer floor but I had already excised her from my mind.

For my third birthday, Polina surprised me with a red-and-blue ball from the flea market that became a source of most things post-war. With time, the equator joining the red and blue hemispheres got scratchier and the ball got saggier. I rolled it in the foyer when the neighbor’s closed their door.

After many peaceful months, the unthinkable happened: my ball slithered into the neighbor’s room. Engulfed in fear I did not cross their threshold, I had to protect my father. That experience launched my memory.

The non-Russian language spoken at home to hide secrets from me finally got a name: Yiddish. The urgency to decipher it washed away Lusya, Krokodil, the ball, and the hopscotching girls in the street.

I followed everybody like a thread follows the needle, to use a Russian proverb, and demanded, in vain, to get a translation of what they said. My ears and eyes were trained obsessively on their lips. When I inserted an appropriate comment, in Russian, into an Yiddish conversation, Polina pressed her palms to her cheeks and exhaled, “Vey iz mir, zie fershteht (woe is me, she understands.)”

Polina could now talk to me without fumbling for a Russian equivalent. She had missed the spontaneity of expression and the authenticity of emotion that her beloved Yiddish gave her.

Her stories sparkled with untranslatable humor, scrumptious details, her father Velvel’s wisdom. She elaborated on the capriciousness of chance. “Gott bestows a secret mazel on each creature. Not just live creatures: one potato rots while another next to it doesn’t. We struggle and guard ourselves from harm but we don’t know what our mazel is. Like my tateh said, all we can do is to be mensch.”

For my fourth birthday I asked for a book—or nothing. I got nothing. According to the latest educational theory, children were not supposed to know the alphabet when they started school at the age of seven. Universal equality demanded the same starting line so that all the children would achieve the same results.

Polina, not in a position to challenge that meshugge idea, followed Rakhil’s instruction to hide printed material from me, albeit halfheartedly and inconsistently.

My dogged determination to conquer the mystery of building words held me hostage to the newspaper. Pages full of speeches of Andrey Vyshinsky, then-Minister of Foreign Affairs and the mastermind of many a purge, fascinated me. Columns and columns of print – infinite combinations of letters.

Of the two main national newspapers, we subscribed to Izvestiya (The News.) It did not differ from Pravda (The Truth) much but the latter was the symbol of the Communist Party and, as such, a leper. A saying went: “in The Truth there is no news, and in The News there is no truth.”

I was four and a half when adjoining letters united – at last! The event took place when a minor stroke landed Polina in the hospital. Rakhil used her vacation to stay with me. She visited Polina every Sunday, early in the morning, ahead of the queue for the limited supply of lab coats that one had to throw over street clothes to enter a patient’s room.

On workdays, she and I stood on the curb from where we could see the third-floor windows. Polina climbed on the windowsill to carry on a conversation through the fortochka taking turns with her roommates.

One day, a sign over a beer cistern manned by a foot-stamping figure in felt boots, a thick shawl and a padded coat caught my eye. The first pair of letters clicked together, then the second. Oblivious to the world, I cried out the two syllables then combined them: “Beer!” In Russian, beer is pronounced Peevo and is spelled as P-I-V-O (in Cyrillic.)

Mastering the first word opened the floodgates: that very day I stumbled, syllable by syllable, through some of Vyshinsky’s speech. Since I did not understand the meaning, I read each part of a word divided between lines as an individual word.

Having pocketed my success in reading I turned to writing. Rakhil, however, put her foot down. Convicted of letting me learn to read, Polina confiscated the pencil if I attempted to squirrel it away.

For my fifth birthday, I received a pink volume that smelled of fresh print: Poems For Children by Samuil Marshak, a renowned poet, an eminent translator of Shakespeare and Robert Burns, the founder of the Soviet children’s literature, and a Jew.

I knew the book by heart but uncovered something new every time I read it. The first book I read to my children, it immigrated to the United States with us.

Ded Moroz (Grandpa Frost), the Russian equivalent of Santa Claus, and his granddaughter Snegurochka (Snow Maiden) on a pre-revolutionary postcard. Photo from: https://ru.wikipedia.org/wiki/Дед_Мороз

She helped decorate it with colorful balls, figurines, snowflakes, chocolate candy, even tangerines, and a red star on top.

In the absence of a tree, Ded Frost left my presents on the table—ribbons for my braids, a pair of stockings, funny-shaped cookies that tasted like Polina’s regular ones.

Celebrations at city’s cultural venues featured Ded Frost and his granddaughter, the Snow Maiden. She hopped with the children around the tree. All kids had a decorated a tree at home but we did not have the space for it or, rather, did not accept it as a secular symbol of New Year as I realized much later.