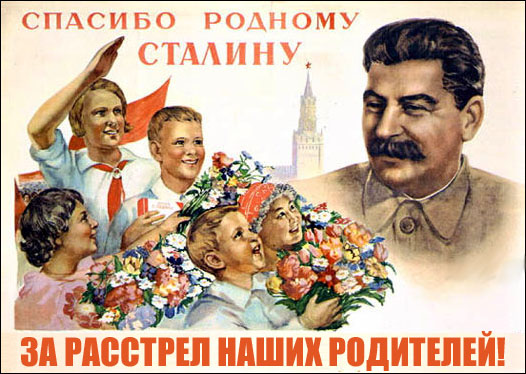 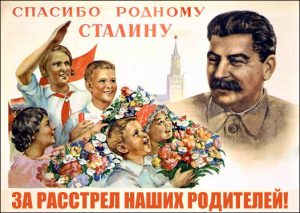 Nothing could be more disorienting than my dignified mother vacating her pedestal to skip around the table or more bewildering than the joy of somebody’s Dad dying. My questions received the mouth-locking signal. Polina baked a sponge cake that night, an event reserved exclusively for my birthday because of the shortage of eggs.

The news triggered a display of grief in the country that, Polina noted, only professional mourners could perform so uniformly. But the emotion was genuine. Families cried inconsolably, panic-stricken strangers embraced in the street lamenting the unjust fate, asking each other what awaited them without the Father and who was going to protect them when American bombs started falling, now that America was not afraid to attack.

Those not saddened kept their faces gloomy in public. Avram rolled his fists at the photographs of weeping Khrushchev: “his arms are up to his elbows in blood.” Rakhil spoke with disdain of the tear-shedding and of traveling to Moscow for the funeral. “Anybody, especially a Jew, who does that deserves what he’s got,” was her comment when a coworker died of pneumonia caught at the funeral.

Like a magic wand, Stalin’s demise stopped the cosmopolitanism campaign, the Doctor’s Plot and who knew what other schemes that gnawed at his diseased mind. As abruptly, interest in sniffing out traitors and spies evaporated.

The fear was less tangible but the adoration of his godlike persona persisted. The directionless hushed country yearned for the next deity to be revealed, to show the way, preserve order, deter capitalist aggression.

Year 1956 was marked by momentous happenings, at home and in the world.

A gas stove replaced its bulky wood-burning predecessor (MVD buildings were converted to gas heating and cooking eight years earlier); it freed up enough room to fit a kitchen table that a carpenter at the plant made for Avram. A gas burner replaced the wood-burning cavity inside the room heater.

A refrigerator took a prominent place in the front room; it did not completely substitute the balya or the freezing of meat outside the fortochka in the winter but it looked impressive and modern.

The Red Army marched into wayward Hungary to reverse an anti-Soviet coup.

Khrushchev denounced Stalin’s cult of personality at the Twentieth Party Congress. He charged his predecessor with all the atrocities perpetrated during purges and with misinterpreting Marxism-Leninism. The Soviet system, the Party, and the high echelon, himself included, were and always had been blameless. The shock of the speech brought on, it was said, heart attacks in the audience and, later, mental breakdowns and suicides.

The plant awarded Avram two rooms in a three-room apartment in a new building near a streetcar and trolley stop. The neighbor, a divorced middle-aged man, dyed his hair every week and smelled of cologne.

In a flash, political jokes ceased to be grounds for persecution; censorship became less vicious; an abbreviated version of Master and Margarita and, on Khrushchev’s direct orders, Solzhenitsyn’s work were published; anybody who was anybody acknowledged past mistakes upon past mistakes profusely (my great-uncle Leib said that the present leader was always perfect, only the former leader was always wrong.)

Forbidden names of the reviled top-drawer victims surfaced in posthumous glory. Their widows, freed from camps for wives of enemies of the people reunited with their fearful and stigmatized adult children brought up in orphanages for children of enemies of the people. They were met with applause, including by those who had put them there and murdered their husbands and fathers – after all, the person at fault was Stalin.

Many of the exiled were convinced that the Party must have had good reasons for crushing their lives. They were enamored by the generosity of the motherland that, albeit decades later, cleared the unjustly prosecuted, let them come home, and, as a bonus, offered reinstatement in the Communist Party.

After thirty years of deification, average citizens had difficulty believing in their god’s mortality, not to mention his evil; in the permanence or sincerity of Khrushchev’s denunciations; or in impunity for believing the disclosures. Those who were not surprised by the revelations viewed the mere fact of them coming to light as freedom incarnate.